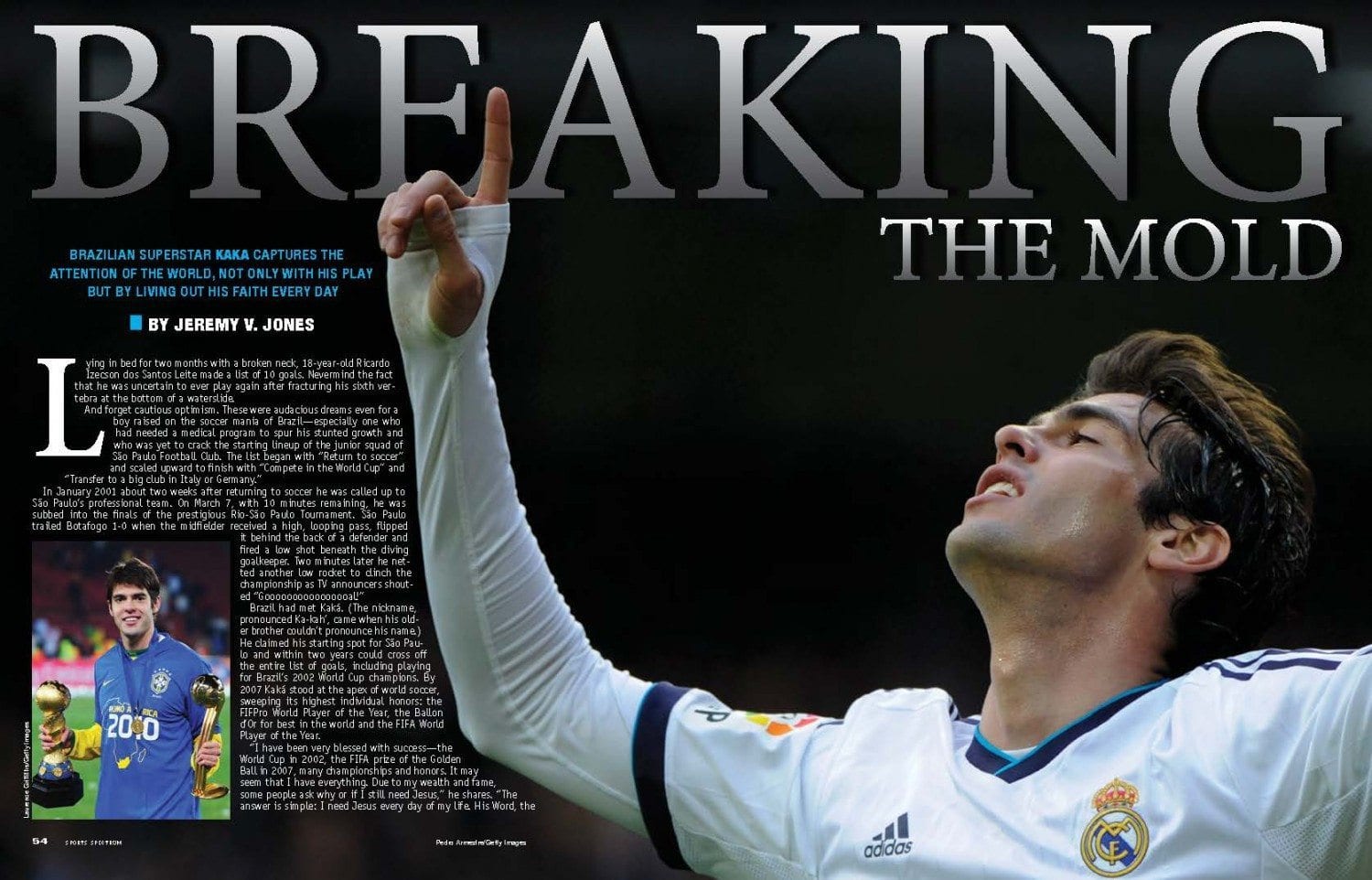 In January 2001 about two weeks after returning to soccer he was called up to São Paulo’s professional team. On March 7, with 10 minutes remaining, he was subbed into the finals of the prestigious Rio-São Paulo Tournament. São Paulo trailed Botafogo 1-0 when the midfielder received a high, looping pass, flipped it behind the back of a defender and fired a low shot beneath the diving goalkeeper. Two minutes later he netted another low rocket to clinch the championship as TV announcers shouted “Goooooooooooooooal!”

Brazil had met Kaká. (The nickname, pronounced Ka-kah’, came when his older brother couldn’t pronounce his name.) He claimed his starting spot for São Paulo and within two years could cross off the entire list of goals, including playing for Brazil’s 2002 World Cup champions. By 2007 Kaká stood at the apex of world soccer, sweeping its highest individual honors: the FIFPro World Player of the Year, the Ballon d’Or for best in the world and the FIFA World Player of the Year.

“I have been very blessed with success—the World Cup in 2002, the FIFA prize of the Golden Ball in 2007, many championships and honors. It may seem that I have everything. Due to my wealth and fame, some people ask why or if I still need Jesus,” he shares. “The answer is simple: I need Jesus every day of my life. His Word, the Bible, tells me that without Him, I can’t do anything. I really believe that. The ability I have to play football and all that has resulted from it are gifts from God. He has given me a talent to use for Him, and I try to improve on it every day.

“I also believe that pursuing excellence with the skills He has given me brings honor to Him. God doesn’t want lukewarm from His followers; He wants our best. First Corinthians 10:31 says, ‘Therefore, whether you eat or drink, or whatever you do, do everything for God’s glory.’ My motivation to win matches…has grown from wanting to be excellent for my Creator.

“It was a dream for me just to play for São Paulo and one game for Brazil, but the Bible says God can give you more than you even ask for and that is what has happened in my life.” 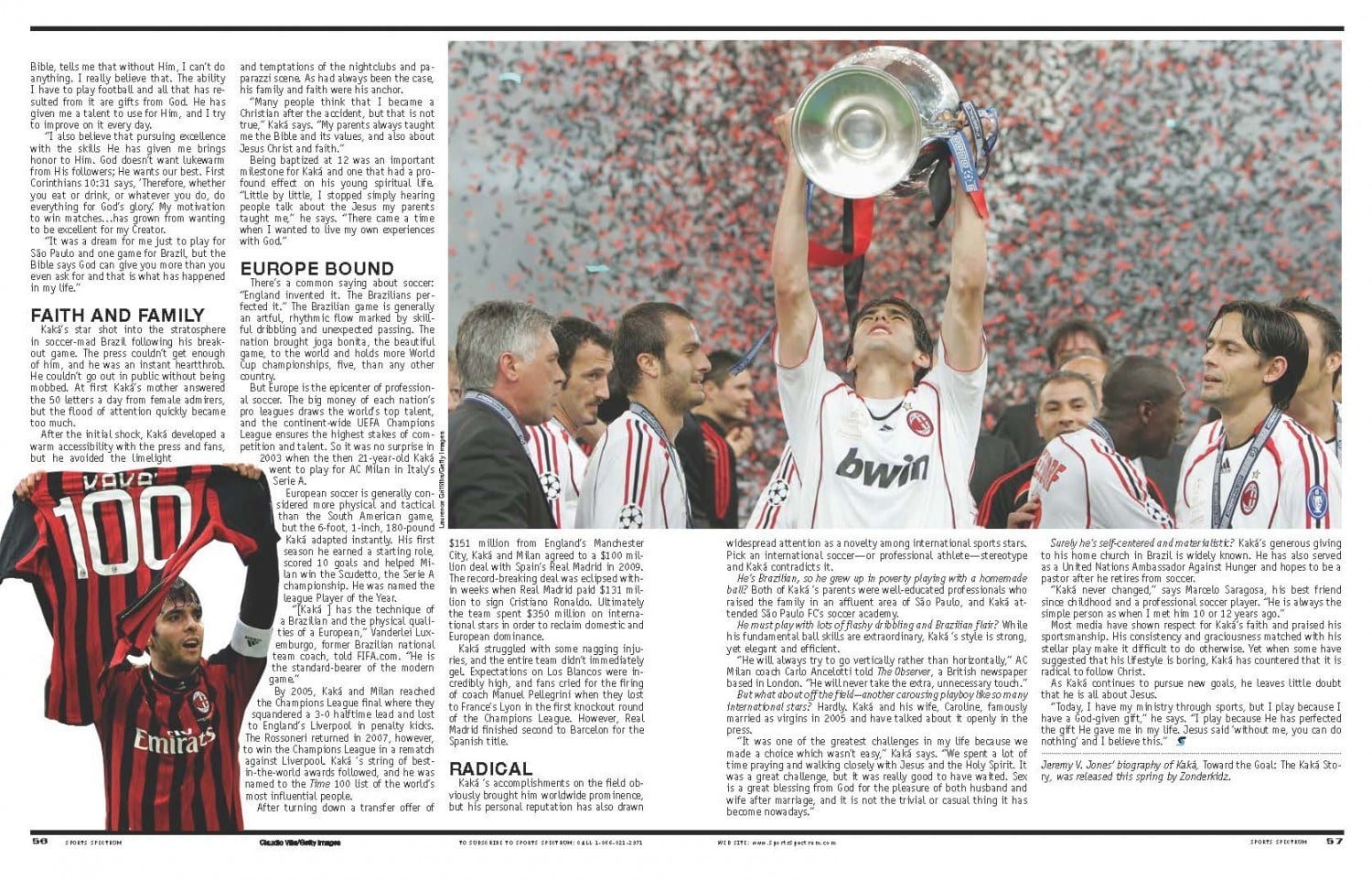 Kaká’s star shot into the stratosphere in soccer-mad Brazil following his breakout game. The press couldn’t get enough of him, and he was an instant heartthrob. He couldn’t go out in public without being mobbed. At first Kaká’s mother answered the 50 letters a day from female admirers, but the flood of attention quickly became too much.

After the initial shock, Kaká developed a warm accessibility with the press and fans, but he avoided the limelight and temptations of the nightclubs and paparazzi scene. As had always been the case, his family and faith were his anchor.

“Many people think that I became a Christian after the accident, but that is not true,” Kaká says. “My parents always taught me the Bible and its values, and also about Jesus Christ and faith.”

Being baptized at 12 was an important milestone for Kaká and one that had a profound effect on his young spiritual life. “Little by little, I stopped simply hearing people talk about the Jesus my parents taught me,” he says. “There came a time when I wanted to live my own experiences with God.”

There’s a common saying about soccer: “England invented it. The Brazilians perfected it.” The Brazilian game is generally an artful, rhythmic flow marked by skillful dribbling and unexpected passing. The nation brought joga bonita, the beautiful game, to the world and holds more World Cup championships, five, than any other country.

But Europe is the epicenter of professional soccer. The big money of each nation’s pro leagues draws the world’s top talent, and the continent-wide UEFA Champions League ensures the highest stakes of competition and talent. So it was no surprise in 2003 when the then 21-year-old Kaká went to play for AC Milan in Italy’s Serie A.

After turning down a transfer offer of $151 million from England’s Manchester City, Kaká and Milan agreed to a $100 million deal with Spain’s Real Madrid in 2009. The record-breaking deal was eclipsed within weeks when Real Madrid paid $131 million to sign Cristiano Ronaldo. Ultimately the team spent $350 million on international stars in order to reclaim domestic and European dominance.

Kaká struggled with some nagging injuries, and the entire team didn’t immediately gel. Expectations on Los Blancos were incredibly high, and fans cried for the firing of coach Manuel Pellegrini when they lost to France’s Lyon in the first knockout round of the Champions League. However, Real Madrid finished second to Barcelon for the Spanish title.

Kaká ’s accomplishments on the field obviously brought him worldwide prominence, but his personal reputation has also drawn

widespread attention as a novelty among international sports stars. Pick an international soccer—or professional athlete—stereotype and Kaká contradicts it.

He must play with lots of flashy dribbling and Brazilian flair? While his fundamental ball skills are extraordinary, Kaká ’s style is strong, yet elegant and efficient.

“He will always try to go vertically rather than horizontally,” AC Milan coach Carlo Ancelotti told The Observer, a British newspaper based in London. “He will never take the extra, unnecessary touch.”

But what about off the field—another carousing playboy like so many international stars? Hardly. Kaká and his wife, Caroline, famously married as virgins in 2005 and have talked about it openly in the press.

“It was one of the greatest challenges in my life because we made a choice which wasn’t easy,” Kaká says. “We spent a lot of time praying and walking closely with Jesus and the Holy Spirit. It was a great challenge, but it was really good to have waited. Sex is a great blessing from God for the pleasure of both husband and wife after marriage, and it is not the trivial or casual thing it has become nowadays.”

Surely he’s self-centered and materialistic? Kaká’s generous giving to his home church in Brazil is widely known. He has also served as a United Nations Ambassador Against Hunger and hopes to be a pastor after he retires from soccer.

“Kaká never changed,” says Marcelo Saragosa, his best friend since childhood and a professional soccer player. “He is always the simple person as when I met him 10 or 12 years ago.”

As Kaká continues to pursue new goals, he leaves little doubt that he is all about Jesus.

Jeremy V. Jones’ biography of Kaká, Toward the Goal: The Kaká Story, was released this spring by Zonderkidz.