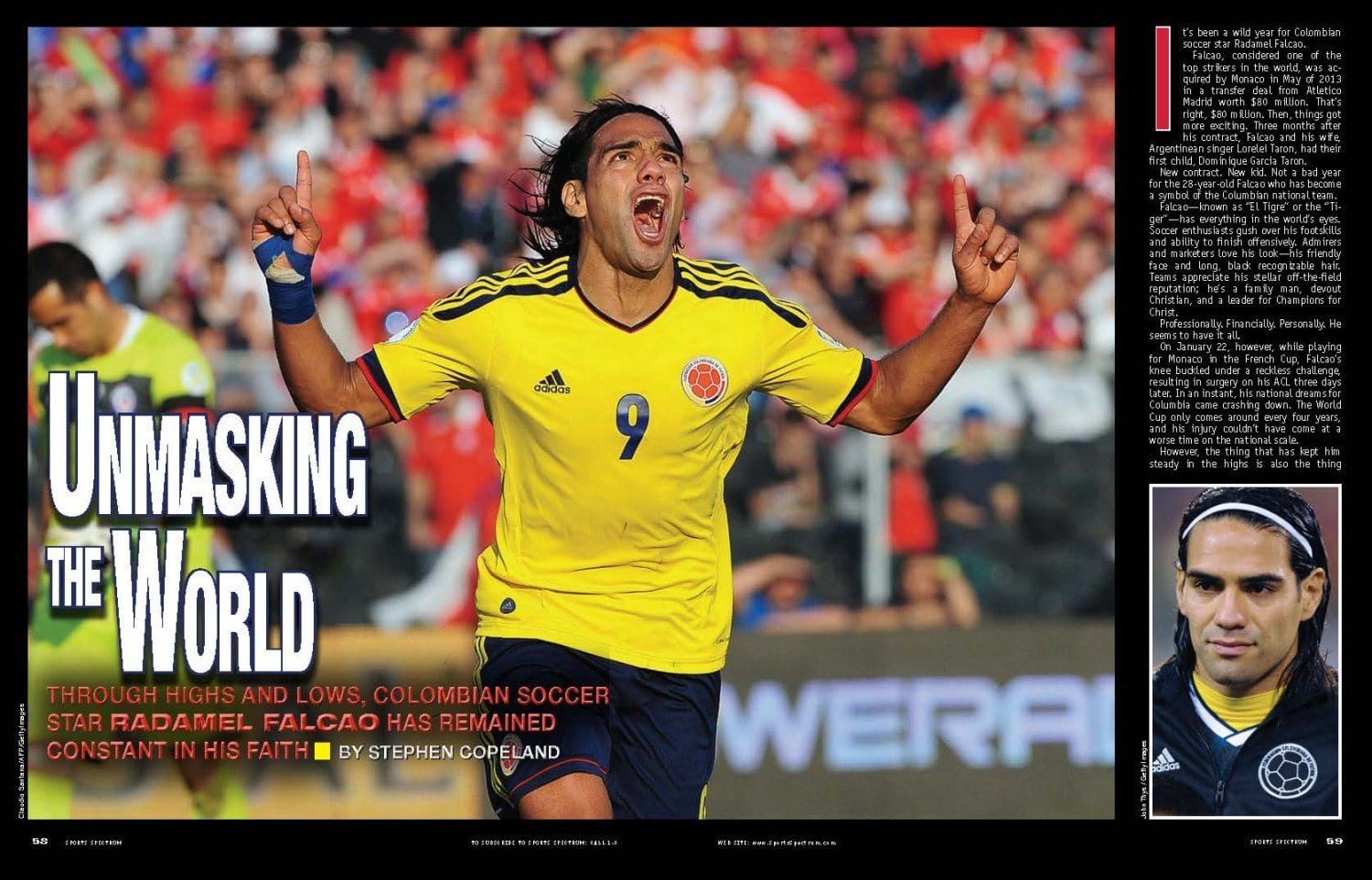 Falcao, considered one of the top strikers in the world, was acquired by Monaco in May of 2013 in a transfer deal from Atletico Madrid worth $80 million. That’s right, $80 million. Then, things got more exciting. Three months after his contract, Falcao and his wife, Argentinean singer Lorelei Taron, had their first child, Dominique Garcia Taron.

New contract. New kid. Not a bad year for the 28-year-old Falcao who has become a symbol of the Columbian national team.

Falcao—known as “El Tigre” or the “Tiger”—has everything in the world’s eyes. Soccer enthusiasts gush over his footskills and ability to finish offensively. Admirers and marketers love his look—his friendly face and long, black recognizable hair. Teams appreciate his stellar off-the-field reputation; he’s a family man, devout Christian, and a leader for Champions for Christ.

Professionally. Financially. Personally. He seems to have it all.

On January 22, however, while playing for Monaco in the French Cup, Falcao’s knee buckled under a reckless challenge, resulting in surgery on his ACL three days later. In an instant, his national dreams for Columbia came crashing down. The World Cup only comes around every four years, and his injury couldn’t have come at a worse time on the national scale.

However, the thing that has kept him steady in the highs is also the thing breathing life into him in the lows. 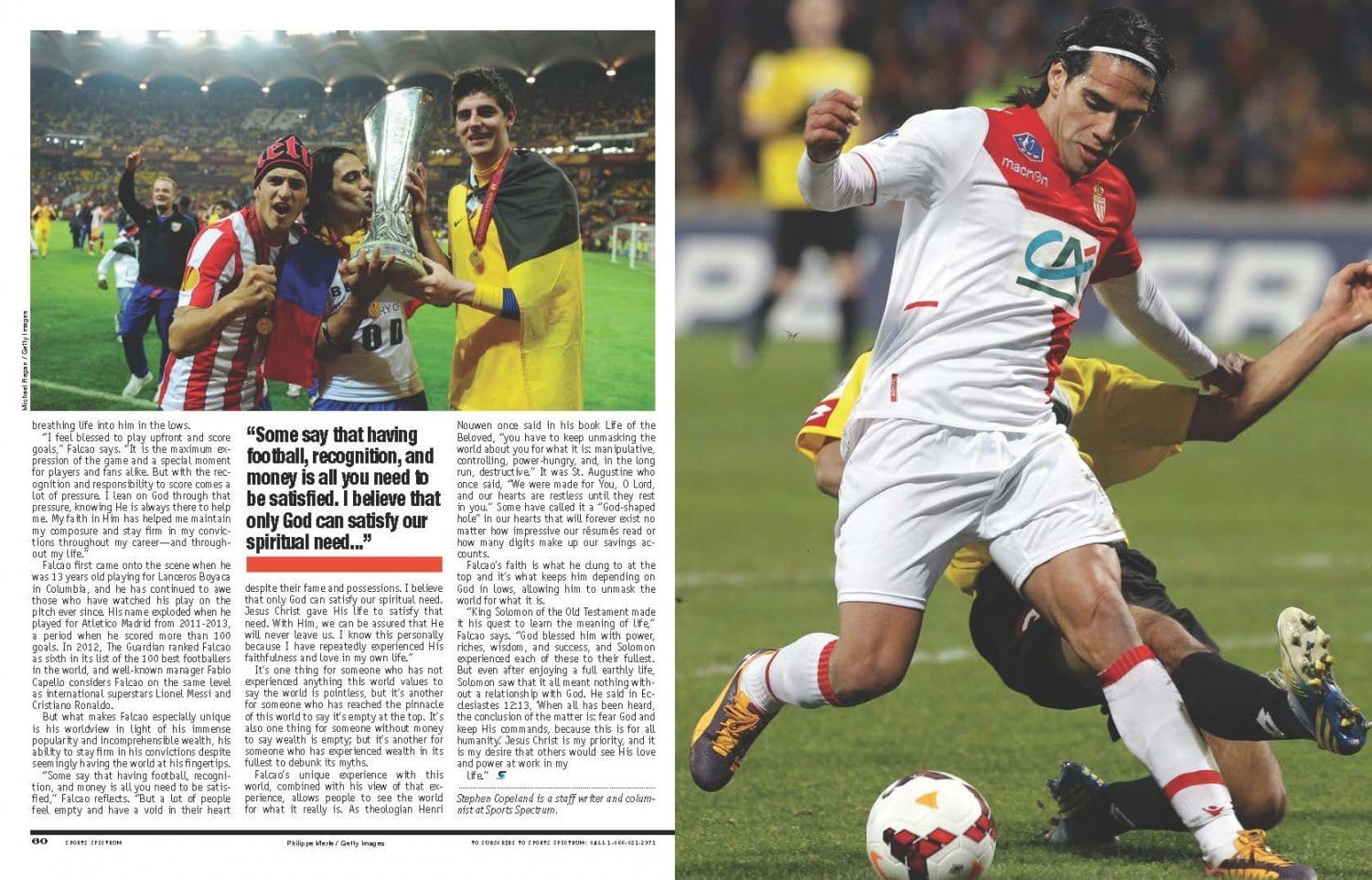 “I feel blessed to play upfront and score goals,” Falcao says. “It is the maximum expression of the game and a special moment for players and fans alike. But with the recognition and responsibility to score comes a lot of pressure. I lean on God through that pressure, knowing He is always there to help me. My faith in Him has helped me maintain my composure and stay firm in my convictions throughout my career—and throughout my life.”

Falcao first came onto the scene when he was 13 years old playing for Lanceros Boyaca in Columbia, and he has continued to awe those who have watched his play on the pitch ever since. His name exploded when he played for Atletico Madrid from 2011-2013, a period when he scored more than 100 goals. In 2012, The Guardian ranked Falcao as sixth in its list of the 100 best footballers in the world, and well-known manager Fabio Capello considers Falcao on the same level as international superstars Lionel Messi and Cristiano Ronaldo.

But what makes Falcao especially unique is his worldview in light of his immense popularity and incomprehensible wealth, his ability to stay firm in his convictions despite seemingly having the world at his fingertips.

“Some say that having football, recognition, and money is all you need to be satisfied,” Falcao reflects. “But a lot of people feel empty and have a void in their heart despite their fame and possessions. I believe that only God can satisfy our spiritual need. Jesus Christ gave His life to satisfy that need. With Him, we can be assured that He will never leave us. I know this personally because I have repeatedly experienced His faithfulness and love in my own life.”

Falcao’s unique experience with this world, combined with his view of that experience, allows people to see the world for what it really is. As theologian Henri Nouwen once said in his book Life of the Beloved, “you have to keep unmasking the world about you for what it is: manipulative, controlling, power-hungry, and, in the long run, destructive.” It was St. Augustine who once said, “We were made for You, O Lord, and our hearts are restless until they rest in you.” Some have called it a “God-shaped hole” in our hearts that will forever exist no matter how impressive our résumés read or how many digits make up our savings accounts.

Falcao’s faith is what he clung to at the top and it’s what keeps him depending on God in lows, allowing him to unmask the world for what it is.

“King Solomon of the Old Testament made it his quest to learn the meaning of life,” Falcao says. “God blessed him with power, riches, wisdom, and success, and Solomon experienced each of these to their fullest. But even after enjoying a full earthly life, Solomon saw that it all meant nothing without a relationship with God. He said in Ecclesiastes 12:13, ‘When all has been heard, the conclusion of the matter is: fear God and keep His commands, because this is for all humanity.’ Jesus Christ is my priority, and it is my desire that others would see His love and power at work in my life.”