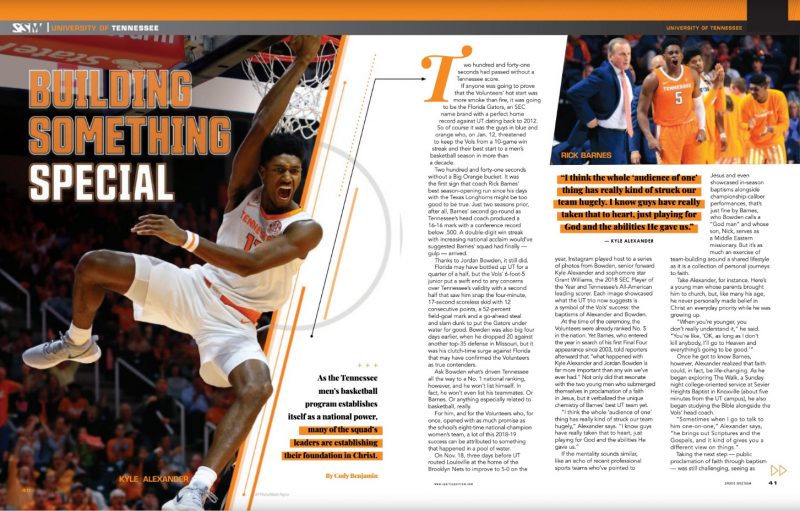 AS THE TENNESSEE MEN’S BASKETBALL PROGRAM ESTABLISHES ITSELF AS A NATIONAL POWER, MANY OF THE SQUAD’S LEADERS ARE ESTABLISHING THEIR FOUNDATION IN CHRIST.

Two hundred and forty-one seconds had passed without a Tennessee score.

If anyone was going to prove that the Volunteers’ hot start was more smoke than fire, it was going to be the Florida Gators, an SEC name brand with a perfect home record against UT dating back to 2012. So of course it was the guys in blue and orange who, on Jan. 12, threatened to keep the Vols from a 10-game win streak and their best start to a men’s basketball season in more than
a decade.

Two hundred and forty-one seconds without a Big Orange bucket. It was the first sign that coach Rick Barnes’ best season-opening run since his days with the Texas Longhorns might be too good to be true. Just two seasons prior, after all, Barnes’ second go-round as Tennessee’s head coach produced a 16-16 mark with a conference record below .500. A double-digit win streak with increasing national acclaim would’ve suggested Barnes’ squad had finally — gulp — arrived.

Thanks to Jordan Bowden, it still did.

Florida may have bottled up UT for a quarter of a half, but the Vols’ 6-foot-5 junior put a swift end to any concerns over Tennessee’s validity with a second half that saw him snap the four-minute, 17-second scoreless skid with 12 consecutive points, a 52-percent field-goal mark and a go-ahead steal and slam dunk to put the Gators under water for good. Bowden was also big four days earlier, when he dropped 20 against another top-35 defense in Missouri, but it was his clutch-time surge against Florida that may have confirmed the Volunteers as true contenders.

Ask Bowden what’s driven Tennessee as high as a No. 1 national ranking this season, however, and he won’t list himself. In fact, he won’t even list his teammates. Or Barnes. Or anything especially related to basketball, really.

For him, and for the Volunteers who, for once, opened with as much promise as the school’s eight-time national-champion women’s team, a lot of this 2018-19 success can be attributed to something that happened in a pool of water.

On Nov. 18, three days before UT routed Louisville at the home of the Brooklyn Nets to improve to 5-0 on the year, Instagram played host to a series of photos from Bowden, senior forward Kyle Alexander and sophomore star Grant Williams, the 2018 SEC Player of the Year and Tennessee’s All-American leading scorer. Each image showcased what the UT trio now suggests is a symbol of the Vols’ success: the baptisms of Alexander and Bowden.

“I think the whole ‘audience of one’ thing has really kind of struck our team hugely. I know guys have really taken that to heart, just playing for God and the abilities He gave us.” — Kyle Alexander

At the time of the ceremony, the Volunteers were already ranked No. 5 in the nation. Yet Barnes, who entered the year in search of his first Final Four appearance since 2003, told reporters afterward that “what happened with Kyle Alexander and Jordan Bowden is far more important than any win we’ve ever had.” Not only did that resonate with the two young men who submerged themselves in proclamation of a faith in Jesus, but it verbalized the unique chemistry of Barnes’ best UT team yet.

“I think the whole ‘audience of one’ thing has really kind of struck our team hugely,” Alexander says. “I know guys have really taken that to heart, just playing for God and the abilities He gave us.”

If the mentality sounds similar, like an echo of recent professional sports teams who’ve pointed to Jesus and even showcased in-season baptisms alongside championship-caliber performances, that’s just fine by Barnes, who Bowden calls a “God man” and whose son, Nick, serves as a Middle Eastern missionary. But it’s as much an exercise of team-building around a shared lifestyle as it is a collection of personal journeys to faith.

Take Alexander, for instance. Here’s a young man whose parents brought him to church, but, like many his age, he never personally made belief in Christ an everyday priority while he was growing up.

“When you’re younger, you don’t really understand it,” he said. “You’re like, ‘OK, as long as I don’t kill anybody, I’ll go to Heaven and everything’s going to be good.’”

Once he got to know Barnes, however, Alexander realized that faith could, in fact, be life-changing. As he began exploring The Walk, a Sunday night college-oriented service at Sevier Heights Baptist in Knoxville (about five minutes from the UT campus), he also began studying the Bible alongside the Vols’ head coach.

“Sometimes when I go to talk to him one-on-one,” Alexander says, “he brings out Scriptures and the Gospels, and it kind of gives you a different view on things.”

Taking the next step — public proclamation of faith through baptism — was still challenging, seeing as though Alexander didn’t grow up knowing and, thus, talking about Jesus. But that’s where community came in, and his community just so happened to be his fellow Volunteers.

“They offered the chance to get baptized [at The Walk], and I had the form in my room, and I’ve always wanted to do it,” he said. “I just never filled it out because I hate being the center of attention, as bad as that sounds. But then one day Bowden was like, ‘Hey, I’m thinking about getting baptized this weekend, so can y’all be there for me? And I said, ‘I’ll do you one better. I’ll get baptized with you.’”