Brooke Wyckoff is the associate head coach for the Florida State women’s basketball program, coming off a season in which she served as the interim head coach while regular head coach Sue Semrau took a leave of absence to care for her mother. Wyckoff has been a big part of FSU for more than two decades, as she was a player from 1997-2001, and began coaching with the Seminoles in 2011 after a decade-long career as a professional player in the WNBA and overseas in Spain. Below, Wyckoff shares about her faith journey and how she aims to see Christ increase in her life.

At the beginning of 2020, we found out that my boss Coach Sue Semrau’s mother had been diagnosed with cancer. Then suddenly the season shut down due to COVID-19. The new reality of COVID and what that would mean for sports seasons was a lot of unknowns. As Coach Sue’s mom continued to go through treatments and we were trying to figure out what our season would look like, conversations started happening about how we were going to do this. We knew Coach Sue may need to step away to take care of her mom. Though the circumstances were less than ideal, I was excited for the opportunity to step up. I was ready to be the interim coach.

As a basketball team, we quickly got used to the fact that we couldn’t predict what would happen the next day. We had to take it day-by-day. We were excited that we had a chance to play; even practice was up in the air for a while. For me to step into a head-coaching role at this time, I was so grateful. You have to be grateful and take it day-by-day because anything could happen. When this past season began and we only had seven or eight players cleared to play, we gave it all we had.

What I’ve learned from starting as an assistant and learning the business, and then more so as a head coach, there is so much out of your control. There is so much you want to control, and as a head coach the burden is all on you. You want to make every situation to your advantage so you can win, but you just can’t. Being self-aware of the situation around me and knowing who I can rely on was crucial.

And so was my faith. I had a great example in Coach Sue, who would say, “How can anyone do this without faith in God? How can you make it day-to-day by relying on yourself?” That’s true for life in general, but in this business there is so much that’s out of our control, and we have to rely on something bigger. That’s our faith in God, what He’s doing and His plan. COVID-19 and the state of the world really helped prepare my heart and mind for that. It was a great way to experience the head-coaching role.

Over the last year and a half through the pandemic, God has been showing me that He really is the only thing we can trust and count on. In our world, but especially throughout this past year, we’ve seen everywhere we look that there is fear, chaos and uncertainty, which doesn’t seem to be getting any better. Yet, I’m so thankful for the peace of knowing there is something greater we can rely on — something better for us. All of the anxiety we’ve gone through this past year, as we’ve seen people sick and hurt in mind and body, I’m so thankful for my faith, knowing there is a God who holds it all in the palm of His hand. 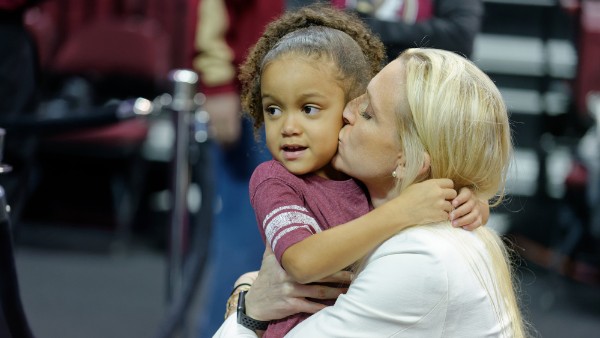 Brooke Wyckoff with her daughter. (Photo courtesy of FSU Athletics)

Basketball was always a passion of mine. I remember being 5 years old and dribbling around with my dad. I was always tall for my age, so when I was 8 it was just assumed: I’m a basketball player. Then when college was on the radar, it was just assumed that I was going to get a full-ride scholarship for basketball. Beyond that I had no aspirations; the WNBA was not a thing at that point and playing internationally was not on my radar.

It was early on that I received feedback that I had a chance to make varsity as a freshman. I was the oldest of six kids, and my parents had made it clear that if I wanted to go to college, I had to find a way to pay for it. I knew this was my path. I enjoyed playing and loved the process of where it brought me.

Growing up, I was always wanting more time with my parents and more attention from them, which I’m sure they wanted to give to me, they just couldn’t. Though that was hard, it did give me the desire to get out and pursue more. I still have a great bond with my parents and siblings, and I am thankful for that adversity.

I grew up in a strong Christian home, which I’m also thankful for, but I found that since I got saved early on, I had to figure out who I was. Basketball was definitely wrapped up in that, being very attuned to my performance. That grew worse as I got older and became a professional. Suddenly my job was my performance and it became a huge thing for me to not derive my worth from how many points I scored or how well I played.

When I was at Florida State, I played for Coach Sue, who was also a very strong Christian, so I was still surrounded by strong Christians and people I could identify with. But at 21, 22 years old, I was still trying to find myself, so when I left college and went to play professionally overseas, that’s when I started to struggle (in a good way) with who I was and whose I was. It was a long process, but I’m happy to say that now that I’m through those 20s and 30s, I’m a lot more sure of some of those things — who I am and whose I am.

There were a lot of ups and downs. It’s so true that your environment and who you surround yourself with is a huge part of your growth. I was playing in a variety of cities throughout Spain and then would come back to play in a different city for the WNBA in the summer. I was living a transient lifestyle, constantly meeting new people, seeing new things and exploring new places.

I am so thankful for the faith I grew up with because it was always there. We may stray from it, but it’s so interesting because my five siblings and I have had very different journeys, yet we all have come back to that faith foundation that we were raised with — no matter what adversity we’ve gone through or how we’ve strayed. When life happens, the Spirit of God pulls you back.

At the beginning of my 30s, I was searching. I had just had a child and felt the pull to put her in a church. I wanted her to go to children’s church even when she was a baby. I knew City Church in Tallahassee had a good children’s ministry, but going to City Church ultimately changed me. Those were the circumstances to get me to go, but it was really me who needed to be in church, not my daughter. It’s fun to see, now seven years since then, how God works and who He works through. We always go back to Him and what is true in our hearts.

But it’s still great for my daughter to be in that environment. She goes to a school with a religious affiliation and goes to chapel three times a week. It warms my heart when she’s memorizing Scripture, when she wants to read the Bible and figure out how to find verses in it, and when she understands these things. The fact that she has this foundation brings me so much joy and peace.

“It was really me who needed to be in church, not my daughter. It’s fun to see, now seven years since then, how God works and who He works through.” — Brooke Wyckoff

After I retired from playing, I began dabbling in coaching by helping out with a local high school team my youngest sister played on. I never thought I would coach, I was just trying to figure out what was next for me. But in volunteering with this team, I fell in love with coaching. I never thought anything would come of it, but soon thereafter Coach Sue reached out and asked me if I had ever thought about college coaching. The rest is history. It couldn’t be a better fit; I’m so thankful to be back here at Florida State. I have grown so much as a person, and being able to work with Sue has been incredible.

I retired from playing when I was 29 years old, and for the last few years leading up to that, I was feeling the non-stop cycle that playing professional basketball is, where you are never grounded. I was feeling the drain. You want to put down roots, you want to have consistency in relationships, and as I got older, it got harder. That back-and-forth in different cities every year was tough on me and I was mentally pulling away from the game. So when I tore my ACL, I was ready to be done. I was ready for something new.

I was ready to give up basketball, but then I thought, “No, wait a minute. I love this game. I love teaching it. Coaching is the perfect thing to do!” I’m so thankful I was pulled into that path. Long before I knew what my future held, God was creating a way for me to be right where I am right now.