INCREASE STORY: God Has Me In His Hands - Debbie Flood

Great Britain’s Debbie Flood was pulled into the sport of rowing while training to be a prison officer. She competed in three Olympics, won two Olympic medals, and won three world championship gold medals. But it didn’t start out easy for her. With a career full of highs and lows, Flood shares how her faith in Jesus Christ has been her strength through it all.

I look back on my life in sport and see how God has taken me on a unique path with different people and circumstances than I had expected. When I found out I wasn’t going to the 2000 Sydney Olympics, I was devastated. I questioned God, asking, “God, why am I here? I just wasted two years of my life, what was the point of that?” I went from an extreme low to having an amazing year. Now I can look back and see where God was taking me.

Growing up, I loved sport and tried lots of sports. I would watch the Olympics and think the athletes were superhuman. I wondered if I would ever be good enough to have the honor of representing my country and going to the Olympic Games. I tried lots of sports and loved competing. I took up judo partly for self-defense, because I went to school in a bit of a rough area, and partly because I was seeking a career as a prison officer. Part of our training was on the rowing machine and I loved it because it was new. I trained hard.

One day someone came up to me and asked if I was a rower. I had never been in a boat and had no idea what rowing really was. He said I was getting really good times on the rowing machine, so I went on a rowing course for a bit of a break. And though I spent most of my first week falling in, it picked up from there. Two years later, I was a world champion.

A few words of encouragement and someone who put time into me made all the difference for me. My coach taught me how to row, but it took time. I came in last place out of more than 100 people in the junior trials for the Sydney Olympics. I came in 14th in the Kingston trials a month later, and then I won the final trials a few months after that.

“Being a Christ-follower and understanding God wasn’t an automatic thing, it was a choice I had to make for myself. I made that choice to ask God into my life and have a relationship with Him.” — Debbie Flood 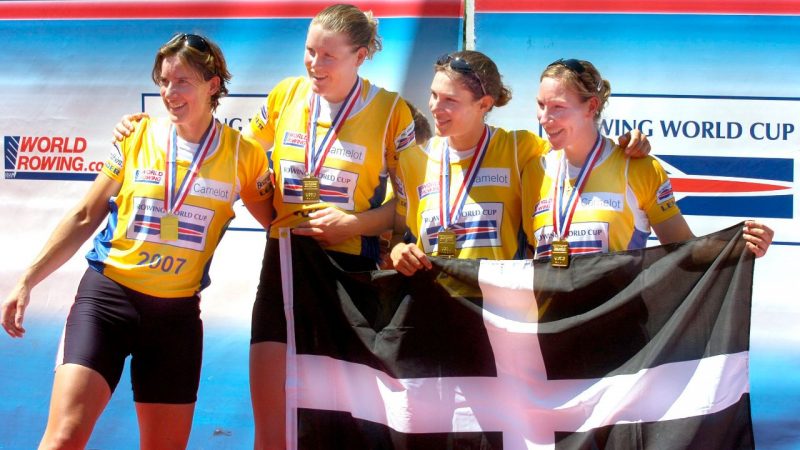 My life plan was to finish school, train full-time for two years, go to the Sydney Olympics and then get on with my life as a veterinarian. I moved away from home; I didn’t know anyone besides my coach. I was aiming to go to Sydney in single sculls, and I had a single race-off in the selection trials. I was leading the race for the first 1500 meters in a 2000-meter race, but in the last 500 meters, my opponent pulled up and I lost the race. I wasn’t going to the Sydney Olympics as a racer.

But my coach encouraged me to keep going. I was invited to be a spare at the Sydney Games, but I didn’t want to be a spare. Instead, I went to the Under-23 World Championships and became the first Brit to win that event. I got to the end of that year and thought, “Wow, this is not what I had intended to do, but if I had to do it all over again, this is what I would do.” I wasn’t good enough for the Olympics at that time, but yet I had such an amazing year. For me, it wasn’t about the wins, it was about realizing that God’s really got me in His hands and has a plan for me.

I often come back to my favorite verse in the Bible which says, “Trust in the Lord with all your heart and lean not on your own understanding; in all your ways submit to him, and he will make your paths straight” (Proverbs 3:5-6). For me, that year was a learning experience. We’re always learning in our faith in Christ. My life is a platform in which I get to know God and I get to know myself as well.

Being a Christ-follower and understanding God wasn’t an automatic thing, it was a choice I had to make for myself. I made that choice to ask God into my life and have a relationship with Him. None of us are perfect; we don’t put God first in our life most of the time. That breaks our relationship with our Creator. But when we hear the name of Jesus and understand that’s how God gave us the opportunity to come back to Him — through believing that God sent His Son Jesus to die on the cross and take away all the wrong stuff we’ve ever done — we can restore that broken relationship. We still mess up every day, but having a relationship with Jesus, and having Him in my life, changes everything.

I want to be right with God, so I prayed, “Jesus come into my life.” That was the start of my perspective on life, and that carried into my sport. My faith has been something that has given me such a grounding and sustained me through the crazy world of sport. See where it took me?