For many, the Olympic Games are a time where citizens unite. Countries gather to cheer for the teams representing their nation through sport. It is a global event that many look forward to every two years.

During the Tokyo Olympic Games in July and August this year, one team didn’t necessarily fit this mold. As a world, we witnessed resilience in action as a group of athletes competed on behalf of the global refugee community.

Representing Refugees on the World Stage

When the Refugee Olympic Team walked out during the opening ceremony, it didn’t represent a country. The athletes were in Tokyo competing on behalf of the 82.4 million displaced people worldwide. According to UNHCR, the UN Refugee Agency, this number results from persecution, violence and human rights violations.

“This will be a symbol of hope for all refugees in the world and will make the world better aware of the magnitude of this crisis,” stated International Olympic Committee President Thomas Bach when he announced the first Refugee Olympic Team in 2015.

Refugee athletes then made their debut at the 2016 Rio Olympic Games. That year, only 10 athletes qualified. This past summer, the size of the team nearly tripled, with 29 refugee athletes participating in 12 different sports.

While we may not know the individual stories of each athlete, we can assume that, as refugees, many have endured trauma in their lifetime. With the number of displaced people increasing as the years pass, it is important people understand the crisis unfolding before them. 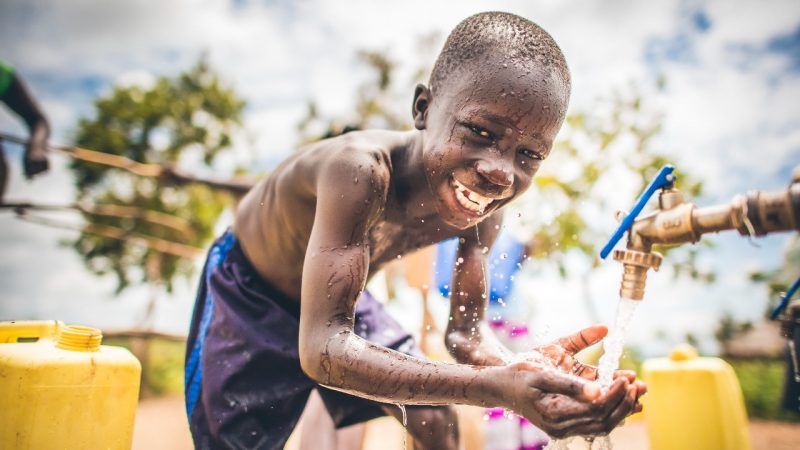 Rhino Camp and Bidibidi are two refugee settlements in Uganda that have welcomed hundreds of thousands of refugees fleeing South Sudan.

“Before coming [to Bidibidi], I lost my child and my husband,” said Mary Yangi, a South Sudanese refugee living in Bidibidi. “After my husband died, I asked myself, ‘From here, what do I do?’ I had to be strong in my faith so I could manage.”

When Rhino Camp and Bidibidi struggled to provide reliable access to safe water for those fleeing South Sudan and other nations, Water Mission stepped in to provide WASH solutions.

“When we joined the settlement, there were a lot of challenges,” Mary said. “There was no water, but Water Mission has done great things. They have supplied the community with enough water, hygiene and trauma healing.”

Out of the 29 athletes on the Refugee Olympic Team, four also fled war-torn South Sudan, just like Mary. The opportunity to witness their strength and resilience as they competed on the world stage offered a glimmer of hope, all while raising awareness about the ongoing refugee crisis.

As a ministry, Water Mission dedicates itself to sharing the Living Water of Jesus Christ through trauma healing classes. Trauma healing is Biblically-based training on forgiving, reconciling conflicts, and providing support and compassion to trauma victims.

“We’re able to share the Living Water message with people that have seen loved ones killed and are struggling with day-to-day life,” said Doug Lawson, Water Mission’s regional director of Kenya and Uganda programs.

This program is just one of the incredible ways Water Mission shares the Gospel with the communities it serves.

There is a deep connection between those on the Refugee Olympic Team and the tens of millions still displaced from their homes. The athletes’ participation at the Tokyo Olympic Games offered the world a glimpse into what overcoming adversity looks like while putting the global refugee crisis on the map.

By praying for refugees worldwide and supporting our friends at Water Mission, you can help empower these communities with access to safe and Living Water. Learn more by visiting watermission.org.

Acadia Munari is a freelance writer for Water Mission.