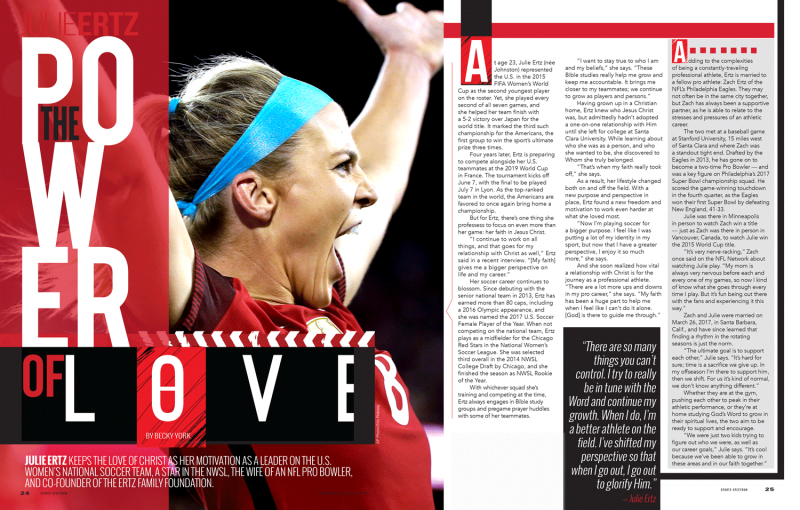 JULIE ERTZ KEEPS THE LOVE OF CHRIST AS HER MOTIVATION AS A LEADER ON THE U.S. WOMEN’S NATIONAL SOCCER TEAM, A STAR IN THE NWSL, THE WIFE OF AN NFL PRO BOWLER, AND CO-FOUNDER OF THE ERTZ FAMILY FOUNDATION.

At age 23, Julie Ertz (née Johnston) represented the U.S. in the 2015 FIFA Women’s World Cup as the second youngest player on the roster. Yet, she played every second of all seven games, and she helped her team finish with a 5-2 victory over Japan for the world title. It marked the third such championship for the Americans, the first group to win the sport’s ultimate prize three times.

Four years later, Ertz is preparing to compete alongside her U.S. teammates at the 2019 World Cup in France. The tournament kicks off June 7, with the final to be played July 7 in Lyon. As the top-ranked team in the world, the Americans are favored to once again bring home a championship.

But for Ertz, there’s one thing she professess to focus on even more than her game: her faith in Jesus Christ.

“I continue to work on all things, and that goes for my relationship with Christ as well,” Ertz said in a recent interview. “[My faith] gives me a bigger perspective on life and my career.”

Her soccer career continues to blossom. Since debuting with the senior national team in 2013, Ertz has earned more than 80 caps, including a 2016 Olympic appearance, and she was named the 2017 U.S. Soccer Female Player of the Year. When not competing on the national team, Ertz plays as a midfielder for the Chicago Red Stars in the National Women’s Soccer League. She was selected third overall in the 2014 NWSL College Draft by Chicago, and she finished the season as NWSL Rookie of the Year.

With whichever squad she’s training and competing at the time, Ertz always engages in Bible study groups and pregame prayer huddles with some of her teammates.

“I want to stay true to who I am and my beliefs,” she says. “These Bible studies really help me grow and keep me accountable. It brings me closer to my teammates; we continue to grow as players and persons.”

Having grown up in a Christian home, Ertz knew who Jesus Christ was, but admittedly hadn’t adopted a one-on-one relationship with Him until she left for college at Santa Clara University. While learning about who she was as a person, and who she wanted to be, she discovered to Whom she truly belonged.

“That’s when my faith really took off,” she says.

As a result, her lifestyle changed both on and off the field. With a new purpose and perspective in place, Ertz found a new freedom and motivation to work even harder at what she loved most.

“Now I’m playing soccer for a bigger purpose. I feel like I was putting a lot of my identity in my sport, but now that I have a greater perspective, I enjoy it so much more,” she says.

And she soon realized how vital a relationship with Christ is for the journey as a professional athlete. “There are a lot more ups and downs in my pro career,” she says. “My faith has been a huge part to help me when I feel like I can’t do it alone. [God] is there to guide me through.”

“There are so many things you can’t control. I try to really be in tune with the Word and continue my growth. When I do, I’m a better athlete on the field. I’ve shifted my perspective so that when I go out, I go out to glorify Him.” — Julie Ertz 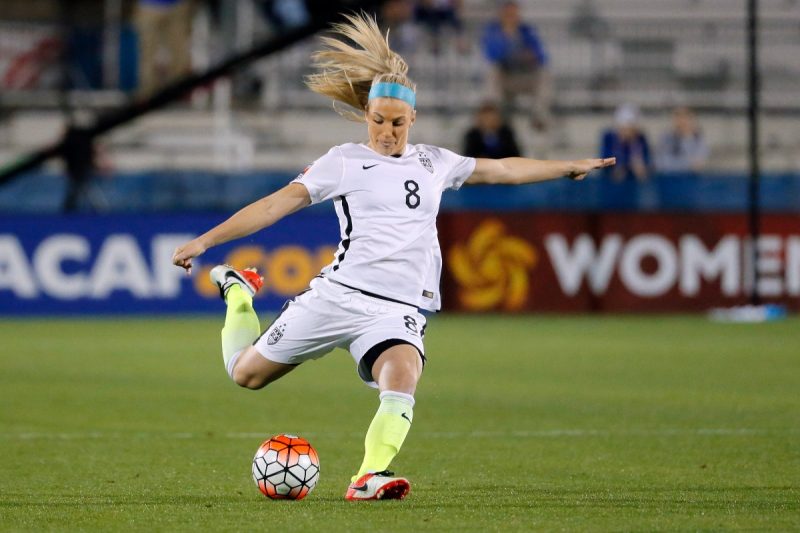 Adding to the complexities of being a constantly-traveling professional athlete, Ertz is married to a fellow pro athlete: Zach Ertz of the NFL’s Philadelphia Eagles. They may not often be in the same city together, but Zach has always been a supportive partner, as he is able to relate to the stresses and pressures of an athletic career.

The two met at a baseball game at Stanford University, 15 miles west of Santa Clara and where Zach was a standout tight end. Drafted by the Eagles in 2013, he has gone on to become a two-time Pro Bowler — and was a key figure on Philadelphia’s 2017 Super Bowl championship squad. He scored the game-winning touchdown in the fourth quarter, as the Eagles won their first Super Bowl by defeating New England, 41-33.