Nate Solder is a 33-year-old offensive lineman for the New York Giants. He was drafted by the New England Patriots with the 17th overall pick in 2011, and after seven seasons in New England (including two Super Bowl titles after the 2014 and 2016 seasons), he signed with the Giants in 2018. He opted out of the 2020 NFL season due to the COVID-19 pandemic but rejoined the team this past March. Below, Solder shares about Thanksgiving, relationships with teammates, and how he aims to see Christ increase in his life.

With Thanksgiving coming up, I enjoy thinking back on past holidays and remembering what a great time it is to be around loved ones. I have great memories of Thanksgiving. My dad grew up on a farm; for four generations they’ve been on this farm, which is where multiple generations would gather most years at Thanksgiving time. And when I was in college, Thanksgiving was a time when I could finally take a breath from high-level football and school.

To this day, there is so much to be thankful for, so why not pause and consider all we have? We are always racing ahead to try to achieve and do a million things, so I love being able to get together with family and friends and just focus on being thankful.

One thing I’m most thankful for is God’s grace. Earlier this year, I described my faith to a small group and compared it to lifting weights. No matter how hard I lift weights, the weight always comes back down. And when you think about God’s grace, we don’t receive His grace because we lifted the weight; it’s because Jesus lifts the weight. He’s the One carrying the burden, and we just get to step into that and enjoy it.

So when I think of giving thanks, I know I don’t deserve a second of this. I really shouldn’t be in this position at all, but because of God’s grace, I’m saved and can have a life that resembles something God would approve of. God’s grace is the Gospel I’m so thankful for.

“I had a mantra I kept telling myself: ‘I’m a child of God and God loves me no matter what my performance is.’ I had to tell myself that over and over again because I could quickly fall into a desire to put my identity in my accomplishments.” — Nate Solder 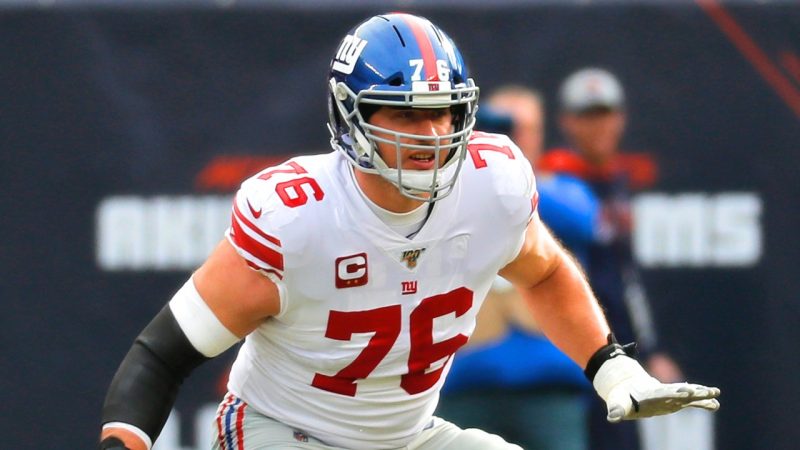 After taking the 2020 season off to be with my family, it was great to rejoin the team this year. I didn’t spend much time studying my playbook last year; football is still football, so once I came back, I felt comfortable on the field.

It was really neat meeting the new players on the team. One day early on we were sitting in the cafeteria eating and one of the new guys, who was from Ghana, said, “In Ghana, we do it this way.” And I realized this is a whole different group of people from when I was last with the team in 2019, and I was so excited to be able to get to know each one of these guys.

Recently, a group of teammates came up to me and said, “Hey, we’d really like to go to church.” I immediately thought, “I’ve been shuffling trying to get people to come to church with me and here these guys are coming to me!” It was just confirmation that Christ is in it. They came and enjoyed it, and then the six guys came over to our house afterward and sat in our backyard while my kids played around us. It was really refreshing.

Relationships are huge, and after the pandemic, everyone came into the season with excitement because we were all ready to be in that relational atmosphere again. Also, when you are around your teammates and they are fighting for what you’re fighting for, you think, “Hey, I can give a little more to this.”

I remember speaking to a small group of people over breakfast once and saying that every year there’s going to be adversity, you just don’t know what it’s going to be. Within weeks of saying that, I got testicular cancer. The next season, my son got sick with kidney cancer. Every year there is serious adversity; every year there are personal crises that happen on every team. But if you put it together and actually win a championship, you realize you’ve gone through a lot. It’s nice to have that group of people to rely on.

Those relationships were a big reason that not playing last year was difficult. I felt like I was letting my teammates down and hurting my career — those were sincere concerns about not playing. But I also think I was addicted to performing, and my identity was wrapped up in who I was as a football player. Taking a step away and realizing the world does not depend on me — the Giants will carry on, the NFL will carry on, lives will not be dramatically impacted by my decision — was helpful. It was a great time to focus on what my priorities are. They get out of whack when you put things before your family, and that’s where mine were. For the first time in my life, I feel like my life is not all about me.

Though I enjoyed watching games during my year off, it was weird that I was no longer viewed as an active football player. I had a mantra I kept telling myself: “I’m a child of God and God loves me no matter what my performance is.” I had to tell myself that over and over again because I could quickly fall into a desire to put my identity in my accomplishments.

But I know this game doesn’t make me who I am. My identity is in Jesus Christ.