In the News: Maya Moore

WNBA Rookie of the Year Maya Moore helped lead the Minnesota Lynx to its first franchise championship on Oct. 7 when they completed a 3-0 sweep against the Atlanta Dream. Maya was featured in the latest issue of Sports Spectrum. To order the issue click here or call 704-821-2971. 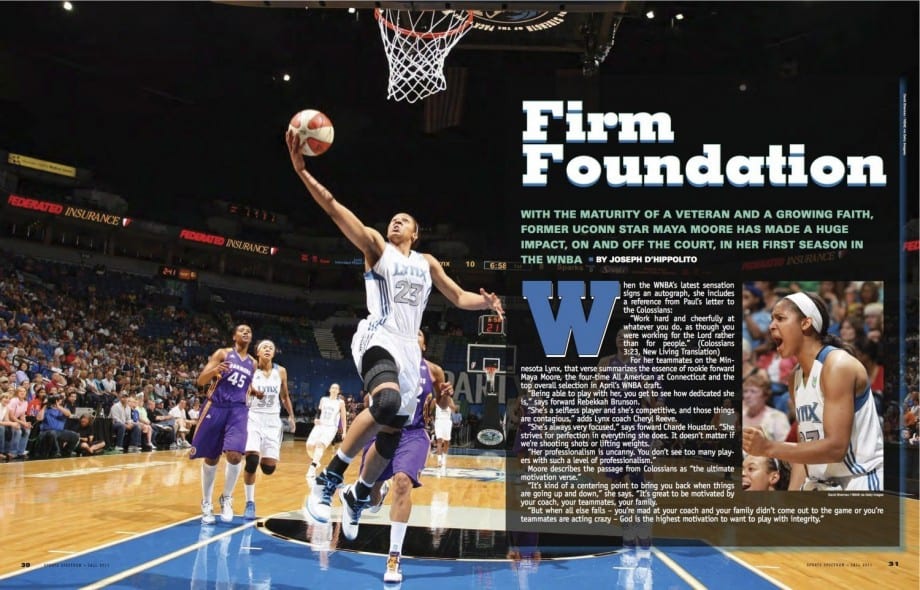 When the WNBA’s latest sensation signs an autograph, she includes a reference from Paul’s letter to the Colossians:

“Work hard and cheerfully at whatever you do, as though you were working for the Lord rather than for people.” (Colossians 3:23, New Living Translation)

For her teammates on the Minnesota Lynx, that verse summarizes the essence of rookie forward Maya Moore, the four-time All American at Connecticut and the top overall selection in April’s WNBA draft.

“Being able to play with her, you get to see how dedicated she is,” says forward Rebekkah Brunson.

“She’s always very focused,” says forward Charde Houston. “She strives for perfection in everything she does. It doesn’t matter if we’re shooting shots or lifting weights.

Moore describes the passage from Colossians as “the ultimate motivation verse.”

“It’s kind of a centering point to bring you back when things are going up and down,” she says. “It’s great to be motivated by your coach, your teammates, your family.

“But when all else fails – you’re mad at your coach and your family didn’t come out to the game or you’re teammates are acting crazy – God is the highest motivation to want to play with integrity.”

Moore needed that perspective and professionalism to survive being the focus of various expectations as a rookie.

At UConn, Moore led the Huskies to two NCAA championships and a 90-game winning streak while finishing fourth in NCAA career scoring. As the WNBA’s top draft choice, Moorejoined a team that finished last or next-to-last in its conference in the previous six seasons.

The Lynx and the WNBA also want Moore to increase fan interest, a hope WNBA President Laurel Richie expressed when the season began.

“The initial signs are showing that her presence is having an impact,” Richie said at the time. “I know that ticket sales were up both in her market and around the league.”

One month after being drafted, Moore signed with Nike, which wants her to help promote its Jordan Brand line. 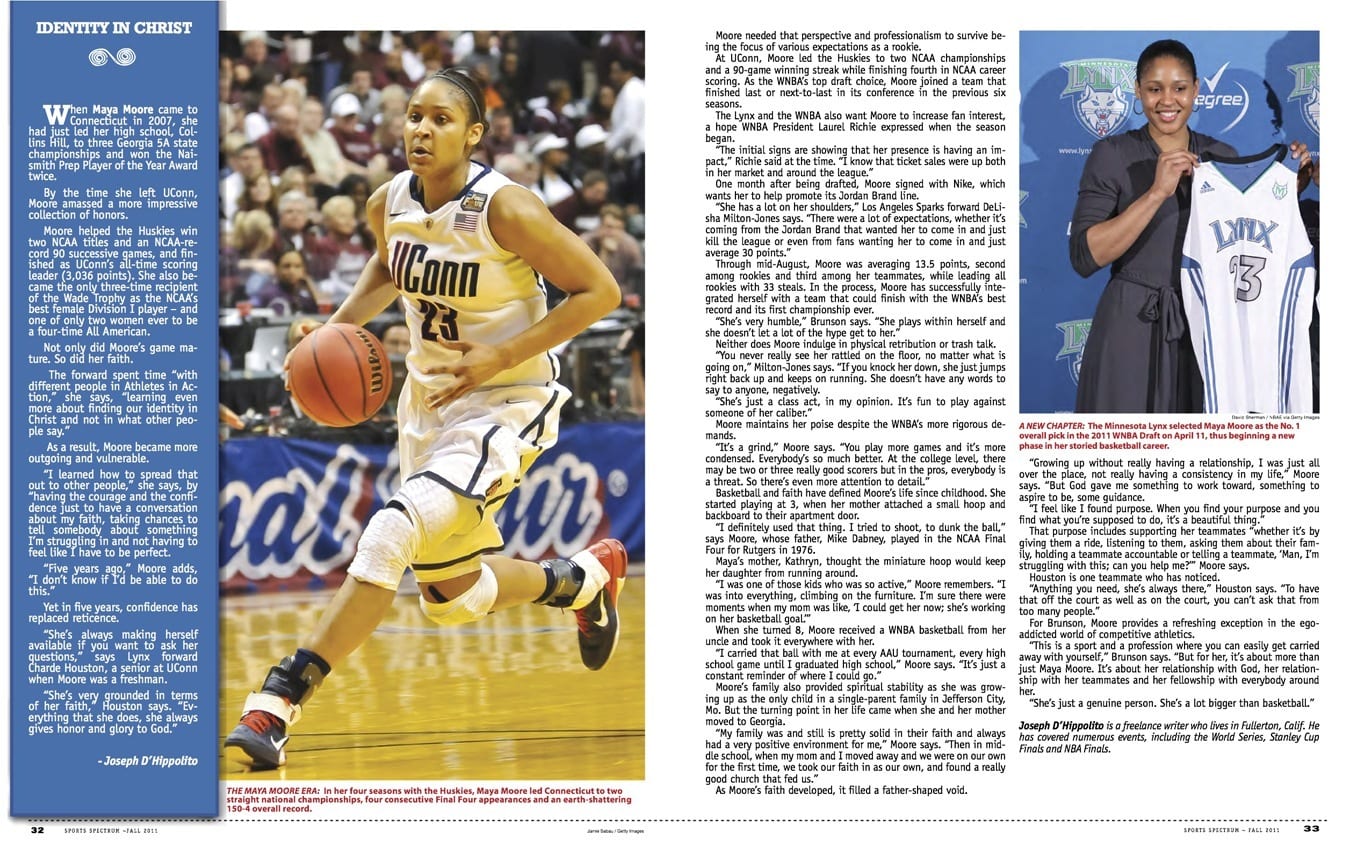 Through mid-August, Moore was averaging 13.5 points, second among rookies and third among her teammates, while leading all rookies with 33 steals. In the process, Moore has successfully integrated herself with a team that could finish with the WNBA’s best record and its first championship ever.

“She’s very humble,” Brunson says. “She plays within herself and she doesn’t let a lot of the hype get to her.”

Neither does Moore indulge in physical retribution or trash talk.

“You never really see her rattled on the floor, no matter what is going on,” Milton-Jones says. “If you knock her down, she just jumps right back up and keeps on running. She doesn’t have any words to say to anyone, negatively.

“She’s just a class act, in my opinion. It’s fun to play against someone of her caliber.”

Moore maintains her poise despite the WNBA’s more rigorous demands.

“It’s a grind,” Moore says. “You play more games and it’s more condensed. Everybody’s so much better. At the college level, there may be two or three really good scorers but in the pros, everybody is a threat. So there’s even more attention to detail.”

Basketball and faith have defined Moore’s life since childhood. She started playing at 3, when her mother attached a small hoop and backboard to their apartment door.

“I definitely used that thing. I tried to shoot, to dunk the ball,” says Moore, whose father, Mike Dabney, played in the NCAA Final Four for Rutgers in 1976.

Maya’s mother, Kathryn, thought the miniature hoop would keep her daughter from running around.

“I was one of those kids who was so active,” Moore remembers. “I was into everything, climbing on the furniture. I’m sure there were moments when my mom was like, ‘I could get her now; she’s working on her basketball goal.’”

When she turned 8, Moore received a WNBA basketball from her uncle and took it everywhere with her.

“I carried that ball with me at every AAU tournament, every high school game until I graduated high school,” Moore says. “It’s just a constant reminder of where I could go.”

Moore’s family also provided spiritual stability as she was growing up as the only child in a single-parent family in Jefferson City, Mo. But the turning point in her life came when she and her mother moved to Georgia.

“My family was and still is pretty solid in their faith and always had a very positive environment for me,” Moore says. “Then in middle school, when my mom and I moved away and we were on our own for the first time, we took our faith in as our own, and found a really good church that fed us.

As Moore’s faith developed, it filled a father-shaped void.

That purpose includes supporting her teammates “whether it’s by giving them a ride, listening to them, asking them about their family, holding a teammate accountable or telling a teammate, ‘Man, I’m struggling with this; can you help me?’” Moore says.

Houston is one teammate who has noticed.

“Anything you need, she’s always there,” Houston says. “To have that off the court as well as on the court, you can’t ask that from too many people.”

For Brunson, Moore provides a refreshing exception in the ego-addicted world of competitive athletics.