This story appears in the Winter 2021 issue of Sports Spectrum Magazine. To read the rest of it, and for more in-depth feature stories like it, subscribe to our quarterly magazine for only $18. 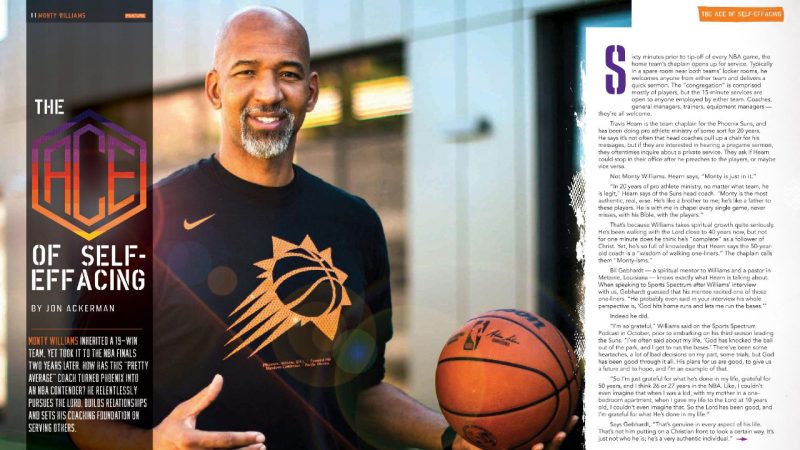 Monty Williams inherited a 19-win team, yet took it to the NBA Finals two years later. How has this “pretty average” coach turned Phoenix into an NBA contender? He relentlessly pursues the Lord, builds relationships and sets his coaching foundation on serving others.

Sixty minutes prior to tip-off of every NBA game, the home team’s chaplain opens up for service. Typically in a spare room near both teams’ locker rooms, he welcomes anyone from either team and delivers a quick sermon. The “congregation” is comprised mostly of players, but the 15-minute services are open to anyone employed by either team. Coaches, general managers, trainers, equipment managers — they’re all welcome.

Travis Hearn is the team chaplain for the Phoenix Suns, and has been doing pro athlete ministry of some sort for 20 years. He says it’s not often that head coaches pull up a chair for his messages, but if they are interested in hearing a pregame sermon, they oftentimes inquire about a private service. They ask if Hearn could stop in their office after he preaches to the players, or maybe vice versa.

Not Monty Williams. Hearn says, “Monty is just in it.”

“In 20 years of pro athlete ministry, no matter what team, he is legit,” Hearn says of the Suns head coach. “Monty is the most authentic, real, wise. He’s like a brother to me; he’s like a father to these players. He is with me in chapel every single game, never misses, with his Bible, with the players.”

That’s because Williams takes spiritual growth quite seriously. He’s been walking with the Lord close to 40 years now, but not for one minute does he think he’s “complete” as a follower of Christ. Yet, he’s so full of knowledge that Hearn says the 50-year-old coach is a “wisdom of walking one-liners.” The chaplain calls them “Monty-isms.”

Bil Gebhardt — a spiritual mentor to Williams and a pastor in Metairie, Louisiana — knows exactly what Hearn is talking about. When speaking to Sports Spectrum after Williams’ interview with us, Gebhardt guessed that his mentee recited one of those one-liners. “He probably even said in your interview his whole perspective is, ‘God hits home runs and lets me run the bases.’”

“I’m so grateful,” Williams said on the Sports Spectrum Podcast in October, prior to embarking on his third season leading the Suns. “I’ve often said about my life, ‘God has knocked the ball out of the park, and I get to run the bases.’ There’ve been some heartaches, a lot of bad decisions on my part, some trials, but God has been good through it all. His plans for us are good, to give us a future and to hope, and I’m an example of that.

Says Gebhardt, “That’s genuine in every aspect of his life. That’s not him putting on a Christian front to look a certain way. It’s just not who he is; he’s a very authentic individual.” 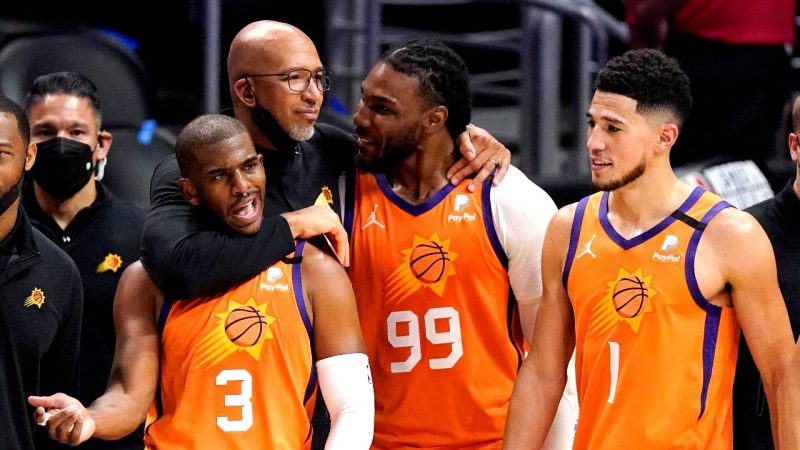 Devin Booker didn’t know much about Williams when the Suns hired him in May 2019, following Booker’s fourth year in the league. The Suns hadn’t won more than 24 games in a season since Booker joined them, and they clawed to just 19 victories in 2018-19, the worst mark in the Western Conference. So Booker asked friends and contacts around the league about this coach coming in with a .439 winning percentage (173-221), which he’d earned as the head coach for five seasons in New Orleans.

The star guard quickly found his future coach was very much respected all around the league. The win-loss record wasn’t gleaming, but anyone who worked with Williams in Portland (where he was an assistant coach from 2005-2010), New Orleans (head coach, 2010-2015), Oklahoma City (associate head coach, 2015-2016), San Antonio (vice president of basketball operations, 2016-2018) or Philadelphia (assistant coach, 2018-2019) spoke quite highly of him.

Much of the respect came in the aftermath of Williams’ powerful eulogy at the funeral of his wife, Ingrid, in February 2016. She was killed in a car accident at the age of 44. He repeatedly cited Scripture as he spoke, and found comfort in knowing his wife was with her Savior in Heaven. He also called for forgiveness of the woman whose car killed his wife, as that family was also grieving the death of their loved one.

Once Williams arrived in Phoenix, Booker immediately sensed something was different.

“The culture around, you can feel it. You can feel it in the air. It started with Monty,” Booker told The Undefeated in November 2019.

The Suns jumped out to a 5-2 record to start that season, but struggled as the games wore on. When the COVID-19 pandemic interrupted everything, the Suns sat at 26-39. Yet, they were among the last of the 22 teams invited into the NBA “bubble” in Orlando to finish out the season. And that’s where things began to turn.

They won each of their eight remaining regular-season games, the only team to go undefeated in the bubble. They still missed the playoffs by a game, but a revival was born.

The Suns in 2020-21 again won five of their first seven games, but this time never trailed off. They finished with the second-best record in the league at 51-21, earning a playoff berth for the first time in 11 years. Then they won the West and reached the NBA Finals, before ultimately losing to the Milwaukee Bucks in six games. It marked just the third Finals trip in Suns history and the most wins in any of Williams’ seven seasons as a head coach.

A great run, but still a season that ended with a loss.

“I think it took me probably about a week or two to kind of get over myself, and realize that I didn’t deserve to win,” Williams said, adding, “I’m grateful that I had a chance to be in that environment and compete for a championship, and it didn’t go our way, but there was a lot of good stuff that happened along the way. … God has done a lot since we’ve been here in Phoenix.”

“No matter what’s going on, a big win or tough loss, I know that I’m there to do God’s will. I don’t do it well, and I fail daily. But that’s my reference point. That’s my lighthouse.” — Monty Williams 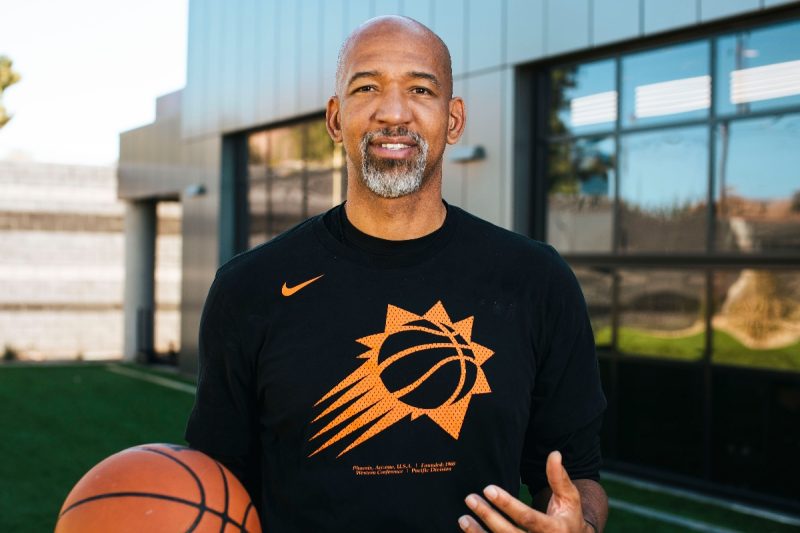 In Game 2 of last season’s Western Conference Finals, Phoenix trailed the L.A. Clippers 103-102 with 0.7 of a second left on the clock. Suns forward Jae Crowder inbounded a pass from the baseline in the corner opposite of the Suns’ bench, lobbing the ball to center Deandre Ayton, who came around a Booker screen and rumbled toward the basket. The ball sailed right over the rim, and Ayton outstretched the Clippers defender to jam home an alley-oop. The Suns took a 2-0 series lead and went on to win the series in six.

That play immediately became known as the “Valley Oop” in Phoenix, giving credit to the city’s nickname, “Valley of the Sun.” The players executed it, sure, but it was drawn up by Williams, and subsequently widely praised.

“What an incredible job by Monty Williams designing that play to perfection,” ESPN announcer Mark Jackson remarked on the game’s broadcast.

The X’s and O’s of coaching aren’t often talked about when discussing Williams, but “he’s very smart; I mean incredibly intelligent,” Hearn says. “And, not just as a man of God, but as a man, as a coach, as a basketball mind.”

Adds Gebhardt, “Knowing him as well as I do now, he’s technically way, way better than he’ll let on that he is. He is very, very good at the X’s and O’s of basketball.”

In typical self-effacing fashion, Williams says, “On a really good day, I’m pretty average at coaching. I know that. I’ve been around the great ones, and I kind of know I’m not that, and so I rely on the Lord to do what He’s gonna do through me. The only thing I know that I can do every day is serve others, and that’s basically the foundation of my coaching.”

Why is his coaching based on serving? “It’s what Jesus mandated. That’s our example,” he says. He points to two specific Bible verses as coaching aides.

“One of my anchor verses is Colossians 3:23, doing my work as ‘unto the Lord and not unto man.’ Another anchor verse for me is Matthew 6:33: ‘Seek ye first the kingdom of God, and his righteousness, and all these things will be added unto you.’

“Those two verses help me in my coaching, because no matter what’s going on, a big win or tough loss, I know that I’m there to do God’s will. I don’t do it well, and I fail daily. But that’s my reference point. That’s my lighthouse. In doing that, my goal is to serve and to elevate people as best I can.”

In living out a servant-leader’s approach, Williams excels at relationship building. He’s far from a demonstrative coach; he’s more low key and a leader by example. And he makes concerted efforts to build a rapport with his players.

“His real strength, especially in the modern NBA, is he’s so relational,” Gebhardt says. “He has a very personal relationship with every guy on his team, and a very honest and open relationship. … And when they have personal issues, he takes real personal interest in them. I think that’s a real strength.”

The relationship he built with point guard Chris Paul in 2010-11 — Williams’ first season as a head coach and Paul’s last of seven seasons in New Orleans — was a big factor in Phoenix trading for the then-10-time All-Star in November 2020. Paul’s acquisition was a key ingredient in transforming the Suns from perennial also-rans to Western Conference contenders.

But Paul also saw the Suns’ run in the Orlando bubble. They were a young team on the rise with a highly-respected coach at the helm. Williams needed some veteran leadership on the court, and Paul got the chance to reunite with a coach whose creative play-calling he loved. 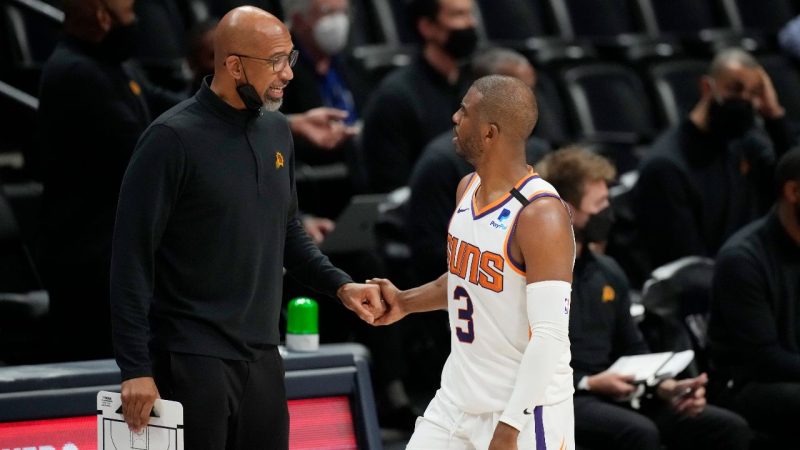 Of course Williams and the Suns have their sights set on returning to the NBA Finals in 2022. Winning a championship is the goal of every player and coach in the NBA. More winning, however, brings more attention to Williams — more media requests, more speaking engagements — of which he’s not especially fond.

Enter one of the most important relationships in Williams’ life. In his attempts to handle the spotlight, he often turns to Gebhardt.

“He’s my spiritual mentor; he’s like my dad. I talk to him on a daily basis about life…

This story appears in the Winter 2021 issue of Sports Spectrum Magazine. To read the rest of it, and for more in-depth feature stories like it, subscribe to our quarterly magazine for only $18.