This story appears in the Summer 2021 issue of Sports Spectrum Magazine. To read the rest of it, and for more in-depth feature stories like it, subscribe to our quarterly magazine for only $18. 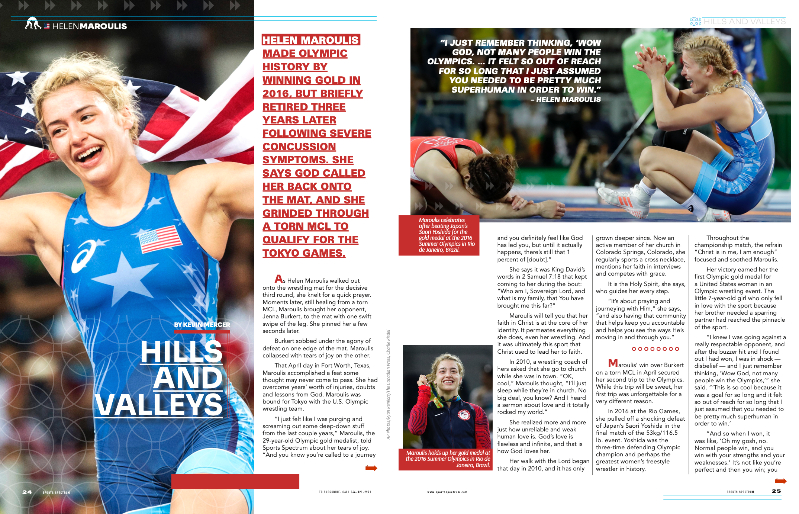 Helen Maroulis made Olympic history by winning gold in 2016, but briefly retired three years later following severe concussion symptoms. She says God called her back onto the mat, and she grinded through a torn MCL to qualify for the Tokyo Games.

As Helen Maroulis walked out onto the wrestling mat for the decisive third round, she knelt for a quick prayer. Moments later, still healing from a torn MCL, Maroulis brought her opponent, Jenna Burkert, to the mat with one swift swipe of the leg. She pinned her a few seconds later.

Burkert sobbed under the agony of defeat on one edge of the mat. Maroulis collapsed with tears of joy on the other.

That April day in Fort Worth, Texas, Maroulis accomplished a feat some thought may never come to pass. She had overcome years’ worth of injuries, doubts and lessons from God. Maroulis was bound for Tokyo with the U.S. Olympic wrestling team.

“I just felt like I was purging and screaming out some deep-down stuff from the last couple years,” Maroulis, the 29-year-old Olympic gold medalist, told Sports Spectrum about her tears of joy. “And you know you’re called to a journey and you definitely feel like God has led you, but until it actually happens, there’s still that 1 percent of [doubt].”

She says it was King David’s words in 2 Samuel 7:18 that kept coming to her during the bout: “Who am I, Sovereign Lord, and what is my family, that you have brought me this far?”

Maroulis will tell you that her faith in Christ is at the core of her identity. It permeates everything she does, even her wrestling. And it was ultimately this sport that Christ used to lead her to faith.

In 2010, a wrestling coach of hers asked that she go to church while she was in town. “OK, cool,” Maroulis thought, “I’ll just sleep while they’re in church. No big deal, you know? And I heard a sermon about love and it totally rocked my world.”

She realized more and more just how unreliable and weak human love is. God’s love is flawless and infinite, and that is how God loves her.

Her walk with the Lord began that day in 2010, and it has only grown deeper since. Now an active member of her church in Colorado Springs, Colorado, she regularly sports a cross necklace, mentions her faith in interviews and competes with grace.

It is the Holy Spirit, she says, who guides her every step.

“It’s about praying and journeying with Him,” she says, “and also having that community that helps keep you accountable and helps you see the ways He’s moving in and through you.”

Maroulis’ win over Burkert on a torn MCL in April secured her second trip to the Olympics. While this trip will be sweet, her first trip was unforgettable for a very different reason.

In 2016 at the Rio Games, she pulled off a shocking defeat of Japan’s Saori Yoshida in the final match of the 53kg/116.5 lb. event. Yoshida was the three-time defending Olympic champion and perhaps the greatest women’s freestyle wrestler in history.

Throughout the championship match, the refrain “Christ is in me, I am enough” focused and soothed Maroulis.

Her victory earned her the first Olympic gold medal for a United States woman in an Olympic wrestling event. The little 7-year-old girl who only fell in love with the sport because her brother needed a sparring partner had reached the pinnacle of the sport.

“I knew I was going against a really respectable opponent, and after the buzzer hit and I found out I had won, I was in shock — disbelief — and I just remember thinking, ‘Wow God, not many people win the Olympics,’” she said. “‘This is so cool because it was a goal for so long and it felt so out of reach for so long that I just assumed that you needed to be pretty much superhuman in order to win.’

“And so when I won, it was like, ‘Oh my gosh, no. Normal people win, and you win with your strengths and your weaknesses.’ It’s not like you’re perfect and then you win; you just win with what you have and who you are.”

The gold medal catapulted Maroulis into Olympic stardom just as the sun was rising on the peak years of her career. That she would be back in the Olympics with a chance to do it all again seemed inevitable.

“He revealed to me that if wrestling is where your pain and trauma happened and you run away from it for the rest of your life, you’re not ever going to heal from it.” — Helen Maroulis

She was well on her way — until a 2018 tournament in India, when she was hit between the eyes and suffered a serious concussion. And then, before she was fully healed, she endured another concussion in practice. It was her third since 2015.

The severe post-concussion aftereffects persisted, and they weren’t simply physical. Her personality changed, opponents targeted her head and, eventually, she was diagnosed with PTSD. For weeks on end, she says, she couldn’t even think about wrestling. The sport she’d loved for decades had become a place of fear and anxiety.

Maroulis’ battles — both internal and external — drove her to move back in with her parents in Maryland and briefly retire from wrestling in 2019. She was exhausted, bedridden and in need of a healer.

“I really just felt like I got completely broken down in order for God to rebuild me again,” Maroulis says. “So [retirement] was actually one of the worst but one of the most amazing things I’ve ever gone through.”

Maroulis was at peace in retirement. Out of the spotlight, she took up dance and now freely admits she didn’t want to come back. But God had other plans.

“I just kind of felt like He revealed to me that if wrestling is where your pain and trauma happened and you run away from it for the rest of your life, you’re not ever going to heal from it.”

It was God, she says, who called her back…

This story appears in the Summer 2021 issue of Sports Spectrum Magazine. To read the rest of it, and for more in-depth feature stories like it, subscribe to our quarterly magazine for only $18.