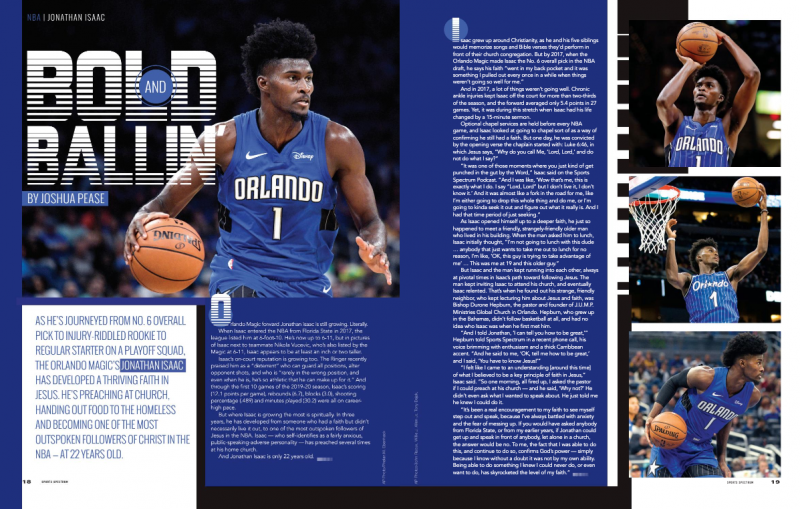 AS HE’S JOURNEYED FROM NO. 6 OVERALL PICK TO INJURY-RIDDLED ROOKIE TO REGULAR STARTER ON A PLAYOFF SQUAD, THE ORLANDO MAGIC’S JONATHAN ISAAC HAS DEVELOPED A THRIVING FAITH IN JESUS. HE’S PREACHING AT CHURCH, HANDING OUT FOOD TO THE HOMELESS AND BECOMING ONE OF THE MOST OUTSPOKEN FOLLOWERS OF CHRIST IN THE NBA — AT 22 YEARS OLD.

When Isaac entered the NBA from Florida State in 2017, the league listed him at 6-foot-10. He’s now up to 6-11, but in pictures of Isaac next to teammate Nikola Vucevic, who’s also listed by the Magic at 6-11, Isaac appears to be at least an inch or two taller.

Isaac’s on-court reputation is growing too. The Ringer recently praised him as a “deterrent” who can guard all positions, alter opponent shots, and who is “rarely in the wrong position, and even when he is, he’s so athletic that he can make up for it.” And through the first 10 games of the 2019-20 season, Isaac’s scoring (12.1 points per game), rebounds (6.7), blocks (3.0), shooting percentage (.489) and minutes played (30.2) were all on career-high pace.

But where Isaac is growing the most is spiritually. In three years, he has developed from someone who had a faith but didn’t necessarily live it out, to one of the most outspoken followers of Jesus in the NBA. Isaac — who self-identifies as a fairly anxious, public-speaking-adverse personality — has preached several times at his home church.

And Jonathan Isaac is only 22 years old.

“It was one of those moments where you just kind of get punched in the gut by the Word. And I was like, ‘Wow that’s me. I say “Lord, Lord” but I don’t live it, I don’t know it.'” — Jonathan Isaac 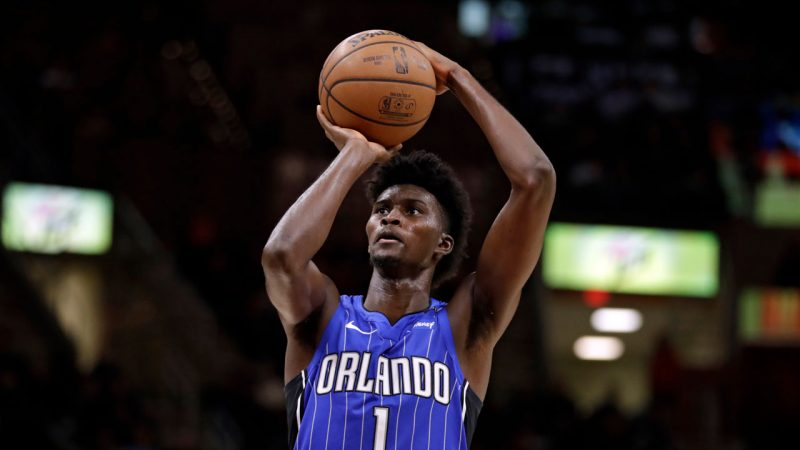 Isaac grew up around Christianity, as he and his five siblings would memorize songs and Bible verses they’d perform in front of their church congregation. But by 2017, when the Orlando Magic made Isaac the No. 6 overall pick in the NBA draft, he says his faith “went in my back pocket and it was something I pulled out every once in a while when things weren’t going so well for me.”

And in 2017, a lot of things weren’t going well. Chronic ankle injuries kept Isaac off the court for more than two-thirds of the season, and the forward averaged only 5.4 points in 27 games. Yet, it was during this stretch when Isaac had his life changed by a 15-minute sermon.

Optional chapel services are held before every NBA game, and Isaac looked at going to chapel sort of as a way of confirming he still had a faith. But one day, he was convicted by the opening verse the chaplain started with: Luke 6:46, in which Jesus says, “Why do you call Me, ‘Lord, Lord,’ and do not do what I say?”

“It was one of those moments where you just kind of get punched in the gut by the Word,” Isaac said on the Sports Spectrum Podcast. “And I was like, ‘Wow that’s me, this is exactly what I do. I say “Lord, Lord” but I don’t live it, I don’t know it.’ And it was almost like a fork in the road for me, like I’m either going to drop this whole thing and do me, or I’m going to kinda seek it out and figure out what it really is. And I had that time period of just seeking.”

As Isaac opened himself up to a deeper faith, he just so happened to meet a friendly, strangely-friendly older man who lived in his building. When the man asked him to lunch, Isaac initially thought, “I’m not going to lunch with this dude … anybody that just wants to take me out to lunch for no reason, I’m like, ‘OK, this guy is trying to take advantage of me’ … This was me at 19 and this older guy.”

But Isaac and the man kept running into each other, always at pivotal times in Isaac’s path toward following Jesus. The man kept inviting Isaac to attend his church, and eventually Isaac relented. That’s when he found out his strange, friendly neighbor, who kept lecturing him about Jesus and faith, was Bishop Durone Hepburn, the pastor and founder of J.U.M.P. Ministries Global Church in Orlando. Hepburn, who grew up in the Bahamas, didn’t follow basketball at all, and had no idea who Isaac was when he first met him.

“And I told Jonathan, ‘I can tell you how to be great,’” Hepburn told Sports Spectrum in a recent phone call, his voice brimming with enthusiasm and a thick Carribbean accent. “And he said to me, ‘OK, tell me how to be great,’ and I said, ‘You have to know Jesus!’”

“I felt like I came to an understanding [around this time] of what I believed to be a key principle of faith in Jesus,” Isaac said. “So one morning, all fired up, I asked the pastor if I could preach at his church — and he said, ‘Why not?’ He didn’t even ask what I wanted to speak about. He just told me he knew I could do it.

“It’s been a real encouragement to my faith to see myself step out and speak, because I’ve always battled with anxiety and the fear of messing up. If you would have asked anybody from Florida State, or from my earlier years, if Jonathan could get up and speak in front of anybody, let alone in a church, the answer would be no. To me, the fact that I was able to do this, and continue to do so, confirms God’s power — simply because I know without a doubt it was not by my own ability. Being able to do something I knew I could never do, or even want to do, has skyrocketed the level of my faith.”

Before long in his journey, Isaac came across Matthew 25:40, where Jesus says “whatever you did for one of the least of these brothers and sisters of Mine, you did for Me.” He had an idea: Buy a bunch of burgers from McDonald’s and distribute them to homeless people in the Orlando area. He mentioned the idea to Hepburn, who promptly told him, “If you’re going to do this, do it right.” Hepburn told Isaac to buy some food and he would set up the rest…