MAGAZINE: Building Up the Bears 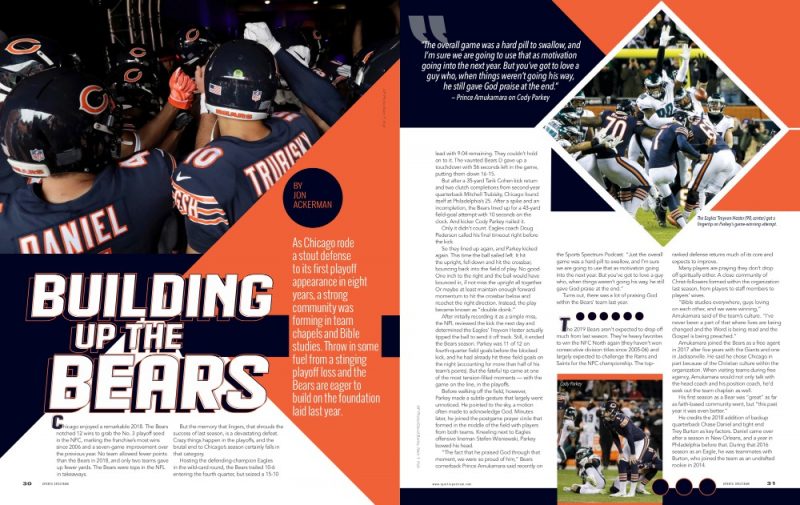 AS CHICAGO RODE A STOUT DEFENSE TO ITS FIRST PLAYOFF APPEARANCE IN EIGHT YEARS,
A STRONG COMMUNITY WAS FORMING IN TEAM CHAPELS AND BIBLE STUDIES.
THROW IN SOME FUEL FROM A STINGING PLAYOFF LOSS AND THE BEARS
ARE EAGER TO BUILD ON THE FOUNDATION LAID LAST YEAR.

Chicago enjoyed a remarkable 2018. The Bears notched 12 wins to grab the No. 3 playoff seed in the NFC, marking the franchise’s most wins since 2006 and a seven-game improvement over the previous year. No team allowed fewer points than the Bears in 2018, and only two teams gave up fewer yards. The Bears were tops in the NFL in takeaways.

But the memory that lingers, that shrouds the success of last season, is a devastating defeat. Crazy things happen in the playoffs, and the brutal end to Chicago’s season certainly falls in that category.

Hosting the defending-champion Eagles in the wild-card round, the Bears trailed 10-6 entering the fourth quarter, but seized a 15-10 lead with 9:04 remaining. They couldn’t hold on to it. The vaunted Bears D gave up a touchdown with 56 seconds left in the game, putting them down 16-15.

But after a 35-yard Tarik Cohen kick return and two clutch completions from second-year quarterback Mitchell Trubisky, Chicago found itself at Philadelphia’s 25. After a spike and an incompletion, the Bears lined up for a 43-yard field-goal attempt with 10 seconds on the clock. And kicker Cody Parkey nailed it.

Only it didn’t count. Eagles coach Doug Pederson called his final timeout right before the kick.

So they lined up again, and Parkey kicked again. This time the ball sailed left. It hit the upright, fell down and hit the crossbar, bouncing back into the field of play. No good. One inch to the right and the ball would have bounced in, if not miss the upright all together. Or maybe at least maintain enough forward momentum to hit the crossbar below and ricochet the right direction. Instead, the play became known as “double doink.”

After initially recording it as a simple miss, the NFL reviewed the kick the next day and determined the Eagles’ Treyvon Hester actually tipped the ball to send it off track. Still, it ended the Bears season. Parkey was 11 of 12 on fourth-quarter field goals before the blocked kick, and he had already hit three field goals on the night (accounting for more than half of his team’s points). But the fateful tip came at one of the most tension-filled moments — with the game on the line, in the playoffs.

Before walking off the field, however, Parkey made a subtle gesture that largely went unnoticed. He pointed to the sky, a motion often made to acknowledge God. Minutes later, he joined the postgame prayer circle that formed in the middle of the field with players from both teams. Kneeling next to Eagles offensive lineman Stefen Wisniewski, Parkey bowed his head.

“The fact that he praised God through that moment, we were so proud of him,” Bears cornerback Prince Amukamara said recently on the Sports Spectrum Podcast. “Just the overall game was a hard pill to swallow, and I’m sure we are going to use that as motivation going into the next year. But you’ve got to love a guy who, when things weren’t going his way, he still gave God praise at the end.”

Turns out, there was a lot of praising God within the Bears’ team last year.

“The overall game was a hard pill to swallow, and I’m sure we are going to use that as motivation going into the next year. But you’ve got to love a guy who, when things weren’t going his way, he still gave God praise at the end.” — Prince Amukamara on Cody Parkey 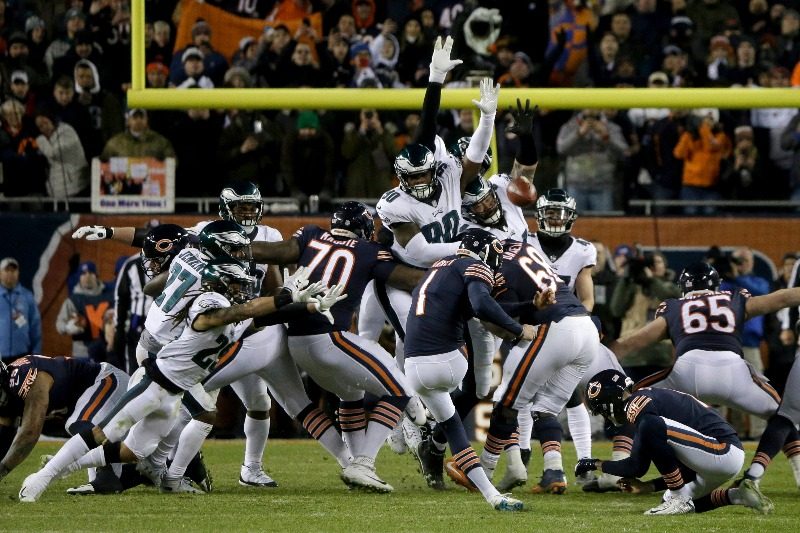 Chicago Bears kicker Cody Parkey (1) kicks and misses a field goal during the second half of the wild-card playoff game against the Philadelphia Eagles, Jan. 6, 2019, in Chicago. The Eagles won 16-15. (AP Photo/David Banks)

The 2019 Bears aren’t expected to drop off much from last season. They’re heavy favorites to win the NFC North again (they haven’t won consecutive division titles since 2005-06) and largely expected to challenge the Rams and Saints for the NFC championship. The top-ranked defense returns much of its core and expects to improve.

Many players are praying they don’t drop off spiritually either. A close community of Christ-followers formed within the organization last season, from players to staff members to players’ wives.

“Bible studies everywhere, guys loving on each other, and we were winning,” Amukamara said of the team’s culture. “I’ve never been a part of that where lives are being changed and the Word is being read and the Gospel is being preached.”

Amukamara joined the Bears as a free agent in 2017 after five years with the Giants and one in Jacksonville. He said he chose Chicago in part because of the Christian culture within the organization. When visiting teams during free agency, Amukamara would not only talk with the head coach and his position coach, he’d seek out the team chaplain as well.

His first season as a Bear was “great” as far as faith-based community went, but “this past year it was even better.”

He credits the 2018 addition of backup quarterback Chase Daniel and tight end Trey Burton as key factors. Daniel came over after a season in New Orleans, and a year in Philadelphia before that. During that 2016 season as an Eagle, he was teammates with Burton, who joined the team as an undrafted rookie in 2014.

“The year that I got there in 2016, the year that Carson [Wentz] got there was 2016, and they already had really strong Christians on their team — Jordan Matthews, Trey Burton, Chris Maragos, Zach Ertz,” Daniel said this summer. “All those guys were not starting their faith walk, they were at a different level — I’ve been in the league 11 years — of most guys I had seen.”

In 2017, with that core group of believers that also included backup-quarterback-turned-starter Nick Foles, the Eagles won the Super Bowl.

“Deep dives into Scripture at least two or three times a week,” Daniel recalled of his year in Philadelphia. “There was something [faith-related] on almost every single day, which I would say is absolutely not the norm in the NFL. It’s over and beyond anything I’ve ever seen.”

The 2018 Bears, Daniel says, were more the norm. A couples Bible study took place on Tuesday nights at the house of defensive lineman Nick Williams, and a player-led Bible study was held Thursday mornings…