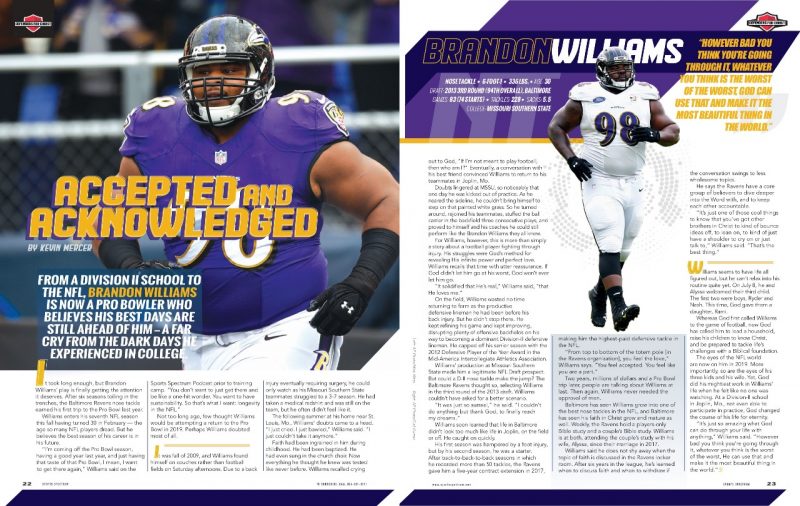 FROM A DIVISION II SCHOOL TO THE NFL, BRANDON WILLIAMS IS NOW A PRO BOWLER
WHO BELIEVES HIS BEST DAYS ARE STILL AHEAD OF HIM — A FAR CRY
FROM THE DARK DAYS HE EXPERIENCED IN COLLEGE.

It took long enough, but Brandon Williams’ play is finally getting the attention it deserves. After six seasons toiling in the trenches, the Baltimore Ravens nose tackle earned his first trip to the Pro Bowl last year.

Williams enters his seventh NFL season this fall having turned 30 in February — the age so many NFL players dread. But he believes the best season of his career is in his future.

“I’m coming off the Pro Bowl season, having a good year last year, and just having that taste of that Pro Bowl, I mean, I want to get there again,” Williams said on the Sports Spectrum Podcast prior to training camp. “You don’t want to just get there and be like a one-hit wonder. You want to have sustainability. So that’s what I want: longevity in the NFL.”

Not too long ago, few thought Williams would be attempting a return to the Pro Bowl in 2019. Perhaps Williams doubted most of all.

It was fall of 2009, and Williams found himself on couches rather than football fields on Saturday afternoons. Due to a back injury eventually requiring surgery, he could only watch as his Missouri Southern State teammates struggled to a 3-7 season. He had taken a medical redshirt and was still on the team, but he often didn’t feel like it.

The following summer at his home near St. Louis, Mo., Williams’ doubts came to a head. “I just cried. I just bawled,” Williams said. “I just couldn’t take it anymore.”

Faith had been ingrained in him during childhood. He had been baptized. He had even sung in the church choir. Now everything he thought he knew was tested like never before. Williams recalled crying out to God, “If I’m not meant to play football, then who am I?” Eventually, a conversation with his best friend convinced Williams to return to his teammates in Joplin, Mo.

Doubts lingered at MSSU, so noticeably that one day he was kicked out of practice. As he neared the sideline, he couldn’t bring himself to step on that painted white grass. So he turned around, rejoined his teammates, stuffed the ball carrier in the backfield three consecutive plays, and proved to himself and his coaches he could still perform like the Brandon Williams they all knew.

“It’s just so amazing what God can do through your life with anything. However bad you think you’re going through it, whatever you think is the worst of the worst, He can use that and make it the most beautiful thing in the world.” — Brandon Williams 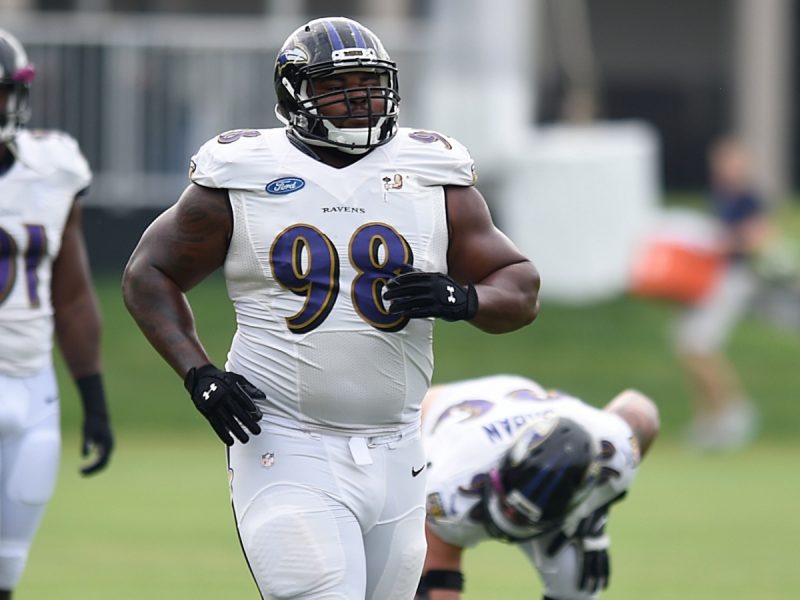 For Williams, however, this is more than simply a story about a football player fighting through injury. His struggles were God’s method for revealing His infinite power and perfect love. Williams recalls that time with utter reassurance. If God didn’t let him go at his worst, God won’t ever let him go.

“It solidified that He’s real,” Williams said, “that He loves me.”

On the field, Williams wasted no time returning to form as the productive defensive lineman he had been before his back injury. But he didn’t stop there. He kept refining his game and kept improving, disrupting plenty of offensive backfields on his way to becoming a dominant Division-II defensive lineman. He capped off his senior season with the 2012 Defensive Player of the Year Award in the Mid-America Intercollegiate Athletics Association.

Williams’ production at Missouri Southern State made him a legitimate NFL Draft prospect. But could a D-II nose tackle make the jump? The Baltimore Ravens thought so, selecting Williams in the third round of the 2013 draft. Williams couldn’t have asked for a better scenario.

“It was just so surreal,” he said. “I couldn’t do anything but thank God, to finally reach my dreams.”

Williams soon learned that life in Baltimore didn’t look too much like life in Joplin, on the field or off. He caught on quickly.

His first season was hampered by a foot injury, but by his second season, he was a starter. After back-to-back-to-back seasons in which he recorded more than 50 tackles, the Ravens gave him a five-year contract extension in 2017, making him the highest-paid defensive tackle in the NFL.

“From top to bottom of the totem pole [in the Ravens organization], you feel the love,” Williams says. “You feel accepted. You feel like you are a part.”

Two years, millions of dollars and a Pro Bowl trip later, people are talking about Williams at last. Then again, Williams never needed the approval of men.

Baltimore has seen Williams grow into one of the best nose tackles in the NFL, and Baltimore has seen his faith in Christ grow and mature as well. Weekly, the Ravens hold a players-only Bible study and a couple’s Bible study. Williams is at both, attending the couple’s study with his wife, Alyssa, since their marriage in 2017…