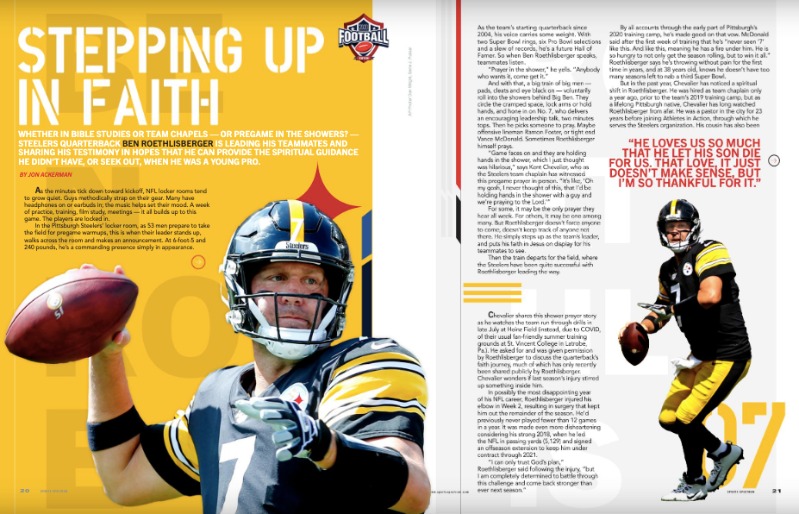 WHETHER IN BIBLE STUDIES OR TEAM CHAPELS — OR PREGAME IN THE SHOWERS? — STEELERS QUARTERBACK BEN ROETHLISBERGER IS LEADING HIS TEAMMATES AND SHARING HIS TESTIMONY IN HOPES THAT HE CAN PROVIDE THE SPIRITUAL GUIDANCE HE DIDN’T HAVE, OR SEEK OUT, WHEN HE WAS A YOUNG PRO.

As the minutes tick down toward kickoff, NFL locker rooms tend to grow quiet. Guys methodically strap on their gear. Many have headphones on or earbuds in; the music helps set their mood. A week of practice, training, film study, meetings — it all builds up to this game. The players are locked in.

In the Pittsburgh Steelers’ locker room, as 53 men prepare to take the field for pregame warmups, this is when their leader stands up, walks across the room and makes an announcement. At 6-foot-5 and 240 pounds, he’s a commanding presence simply in appearance. As the team’s starting quarterback since 2004, his voice carries some weight. With two Super Bowl rings, six Pro Bowl selections and a slew of records, he’s a future Hall of Famer. So when Ben Roethlisberger speaks, teammates listen.

“Prayer in the shower,” he yells. “Anybody who wants it, come get it.”

And with that, a big train of big men — pads, cleats and eye black on — voluntarily roll into the showers behind Big Ben. They circle the cramped space, lock arms or hold hands, and hone in on No. 7, who delivers an encouraging leadership talk, two minutes tops. Then he picks someone to pray. Maybe offensive lineman Ramon Foster, or tight end Vance McDonald. Sometimes Roethlisberger himself prays.

“Game faces on and they are holding hands in the shower, which I just thought was hilarious,” says Kent Chevalier, who as the Steelers team chaplain has witnessed this pregame prayer in person. “It’s like, ‘Oh my gosh, I never thought of this, that I’d be holding hands and we’re praying to the Lord.’”

For some, it may be the only prayer they hear all week. For others, it may be one among many. But Roethlisberger doesn’t force anyone to come, doesn’t keep track of anyone not there. He simply steps up as the team’s leader, and puts his faith in Jesus on display for his teammates to see.

Then the train departs for the field, where the Steelers have been quite successful with Roethlisberger leading the way. 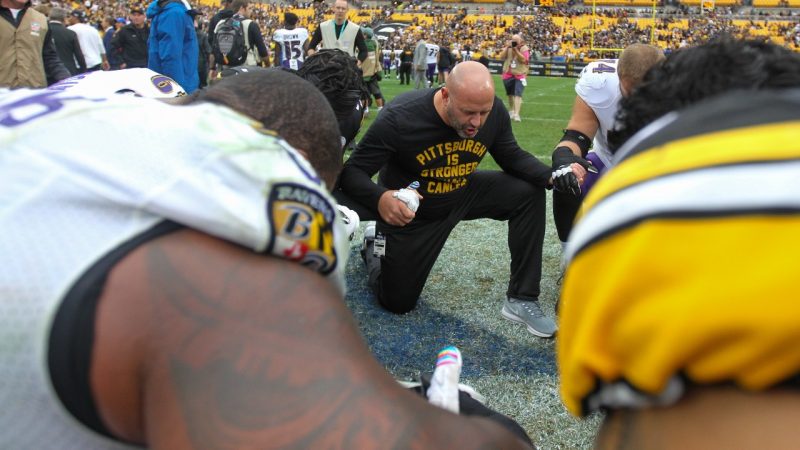 Chevalier shares this shower prayer story as he watches the team run through drills in late July at Heinz Field (instead, due to COVID, of their usual fan-friendly summer training grounds at St. Vincent College in Latrobe, Pa.). He asked for and was given permission by Roethlisberger to discuss the quarterback’s faith journey, much of which has only recently been shared publicly by Roethlisberger. Chevalier wonders if last season’s injury stirred up something inside him.

In possibly the most disappointing year of his NFL career, Roethlisberger injured his elbow in Week 2, resulting in surgery that kept him out the remainder of the season. He’d previously never played fewer than 12 games in a year. It was made even more disheartening considering his strong 2018, when he led the NFL in passing yards (5,129) and signed an offseason extension to keep him under contract through 2021.

“I can only trust God’s plan,” Roethlisberger said following the injury, “but I am completely determined to battle through this challenge and come back stronger than ever next season.”

By all accounts through the early part of Pittsburgh’s 2020 season, he’s made good on that vow. McDonald said after the first week of training that he’s “never seen ‘7’ like this. And like this, meaning he has a fire under him. He is so hungry to not only get the season rolling, but to win it all.” Roethlisberger says he’s throwing without pain for the first time in years, and at 38 years old, knows he doesn’t have too many seasons left to nab a third Super Bowl.

But in the past year, Chevalier has noticed a spiritual shift in Roethlisberger. He was hired as team chaplain only a year ago, prior to the team’s 2019 training camp, but as a lifelong Pittsburgh native, Chevalier has long watched Roethlisberger from afar. He was a pastor in the city for 23 years before joining Athletes in Action, through which he serves the Steelers organization. His cousin has also been a Pittsburgh pastor for 20-plus years. Members and active participants in the kids ministry at his cousin’s church for the past decade have been Ben and Ashley Roethlisberger.

Being the new guy among the Steelers’ fellowship gatherings — which include player Bible studies, team chapel services, as well as couples and wives studies, all of which receive much backing and support from head coach Mike Tomlin — Chevalier wanted to get to know the players better. So he asked a few to share their testimonies, one each week at chapel the night before games in the team hotel. All season, he asked Roethlisberger.

“He’s like, ‘Ah, I don’t know, I don’t know.’ And then right at the end, like in December, he came up to me and goes, ‘Hey, have you found your last chapel speaker yet?’ And I was like, ‘Yes, you,’” Chevalier recalls, laughing.

Roethlisberger agreed, and so the night before the Steelers faced the Ravens at Baltimore in Week 17, their leader shared his journey of faith. He talked about growing up in a Christian home, not pursuing his faith in college, the instant fame he found in the NFL, and how he now lives out his faith in Christ.

“When he spoke at chapel that last week, I invited everybody I could — like front office guys, staff,” Chevalier said. “It was the biggest chapel we had. We were above 50 people in that chapel, all face to face and Ben crushed it. Man, he did such a good job. I was so proud of him for going public with all of his teammates.”

Chevalier told Roethlisberger as much afterward, then encouraged him to keep sharing his story. It can not only connect with NFL players, he said, but kids and fans everywhere.

“I didn’t grow as a Christian in college, and I wish more than anything I would have. I wish I would have been on the path of growth and trying to get closer to Him all through college because I can only imagine where I’d be now.” — Ben Roethlisberger

In February, Ben and Ashley attended their first Pro Athletes Outreach conference, at which they met dozens of other Christ-following couples in the NFL. And then in June, Roethlisberger shared his testimony even more publicly. He was a featured guest for ManUp Pittsburgh, an annual conference Coach Tomlin helps lead with the Urban Impact ministry. Roethlisberger had been asked to speak for years, Chevalier says, but finally did this summer.

It’s usually an event for some 1,500 men in the Pittsburgh area, yet due to the coronavirus pandemic, the 2020 conference was a condensed online program free to anyone. Organizers were at first disappointed that the usual large crowd wouldn’t be able to hear Roethlisberger speak — but were soon blown away when the mainstream sports media picked up on the QB’s 15-minute interview.

But the widespread attention brought more viewers to the ManUp video than would have likely seen it otherwise. Thus, more people, many for the first time, learned about Roethlisberger’s faith journey. And during his 15 minutes, he shared about a moment that likely sparked the spiritual shift.

“Three years ago I got baptized,” Roethlisberger said. “I was baptized as a kid; my parents took me as a baby. But I didn’t make that decision. So three years ago now I made the decision to be baptized because I felt like I needed to do that. I wanted to have a closer walk, a better relationship with Jesus, with my wife, with my kids, with my family — become a better person.

“So I think the person that brought me to Him was Jesus. Jesus is the One who brought me back to Him, and I’m so thankful for it because I feel I’m a better Christian, a better husband and a better father today because of His forgiveness of me.”

In July, just a few weeks before reporting to training camp, Roethlisberger further shared his faith journey when he joined former MLB All-Star Matt Holliday and his wife, Leslee, on their “Table Forty” podcast, which is a part of the Sports Spectrum Podcast Network. For nearly 40 minutes, he was just as open and honest about his faith, his struggles, his marriage and his family.

Born and raised in Northern Ohio, Roethlisberger’s parents divorced when he was young. Still, he “can’t ever remember missing church. Sports? You better get back on Sundays for church,” he said…