MAGAZINE: L.A. Angels 3B Anthony Rendon is Underrated No More 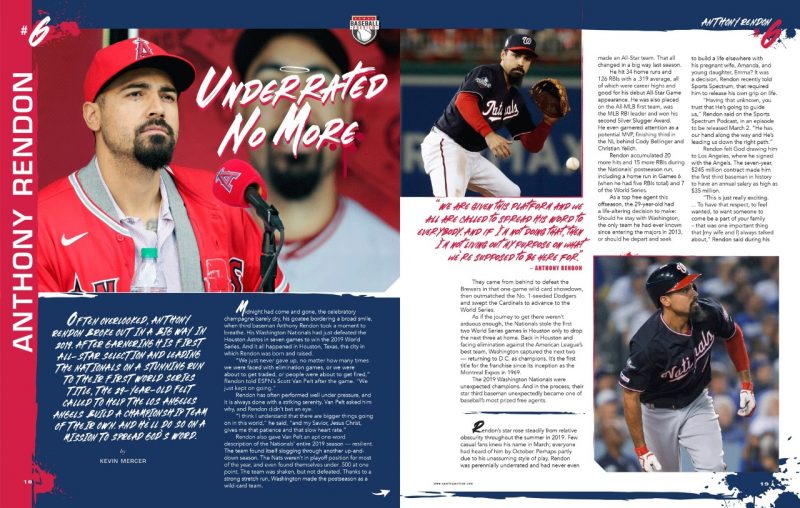 OFTEN OVERLOOKED, ANTHONY RENDON BROKE OUT IN A BIG WAY IN 2019.
AFTER GARNERING HIS FIRST ALL-STAR SELECTION AND LEADING THE NATIONALS ON A STUNNING RUN TO THEIR FIRST WORLD SERIES TITLE, THE 29-YEAR-OLD FELT CALLED TO HELP THE LOS ANGELES ANGELS BUILD A CHAMPIONSHIP TEAM OF THEIR OWN.
AND HE’LL DO SO ON A MISSION TO SPREAD GOD’S WORD.

Midnight had come and gone, the celebratory champagne barely dry, his goatee bordering a broad smile, when third baseman Anthony Rendon took a moment to breathe. His Washington Nationals had just defeated the Houston Astros in seven games to win the 2019 World Series. And it all happened in Houston, Texas, the city in which Rendon was born and raised.

“We just never gave up, no matter how many times we were faced with elimination games, or we were about to get traded, or people were about to get fired,” Rendon told ESPN’s Scott Van Pelt after the game. “We just kept on going.”

Rendon has often performed well under pressure, and it is always done with a striking serenity. Van Pelt asked him why, and Rendon didn’t bat an eye.

“I think I understand that there are bigger things going on in this world,” he said, “and my Savior, Jesus Christ, gives me that patience and that slow heart rate.”

Rendon also gave Van Pelt an apt one-word description of the Nationals’ entire 2019 season — resilient. The team found itself slogging through another up-and-down season. The Nats weren’t in playoff position for most of the year, and even found themselves under .500 at one point. The team was shaken, but not defeated. Thanks to a strong stretch run, Washington made the postseason as a wild-card team.

They came from behind to defeat the Brewers in that one-game wild-card showdown, then outmatched the No. 1-seeded Dodgers and swept the Cardinals to advance to the World Series.

As if the journey to get there weren’t arduous enough, the Nationals stole the first two World Series games in Houston only to drop the next three at home. Back in Houston and facing elimination against the American League’s best team, Washington captured the next two — returning to D.C. as champions. It’s the first title for the franchise since its inception as the Montreal Expos in 1969.

The 2019 Washington Nationals were unexpected champions. And in the process, their star third baseman unexpectedly became one of baseball’s most prized free agents.

“We are given this platform and we all are called to spread His Word to everybody. And if I’m not doing that, then I’m not living out my purpose on what we’re supposed to be here for.” — Anthony Rendon

Rendon’s star rose steadily from relative obscurity throughout the summer in 2019. Few casual fans knew his name in March; everyone had heard of him by October. Perhaps partly due to his unassuming style of play, Rendon was perennially underrated and had never even made an All-Star team. That all changed in a big way last season.

He hit 34 home runs and 126 RBIs with a .319 average, all of which were career highs and good for his debut All-Star Game appearance. He was also placed on the All-MLB first team, was the MLB RBI leader and won his second Silver Slugger Award. He even garnered attention as a potential MVP, finishing third in the NL behind Cody Bellinger and Christian Yelich.

Rendon accumulated 20 more hits and 15 more RBIs during the Nationals’ postseason run, including a home run in Games 6 (when he had five RBIs total) and 7 of the World Series.

As a top free agent this offseason, the 29-year-old had a life-altering decision to make: Should he stay with Washington, the only team he had ever known since entering the majors in 2013, or should he depart and seek to build a life elsewhere with his pregnant wife, Amanda, and young daughter, Emma? It was a decision, Rendon recently told Sports Spectrum, that required him to release his own grip on life.

“Having that unknown, you trust that He’s going to guide us,” Rendon said on the Sports Spectrum Podcast. “He has our hand along the way and He’s leading us down the right path.”

Rendon felt God drawing him to Los Angeles, where he signed with the Angels. The seven-year, $245 million contract made him the first third baseman in history to have an annual salary as high as $35 million.

“This is just really exciting. … To have that respect, to feel wanted, to want someone to come be a part of your family — that was one important thing that [my wife and I] always talked about,” Rendon said during his introductory press conference with the Angels. 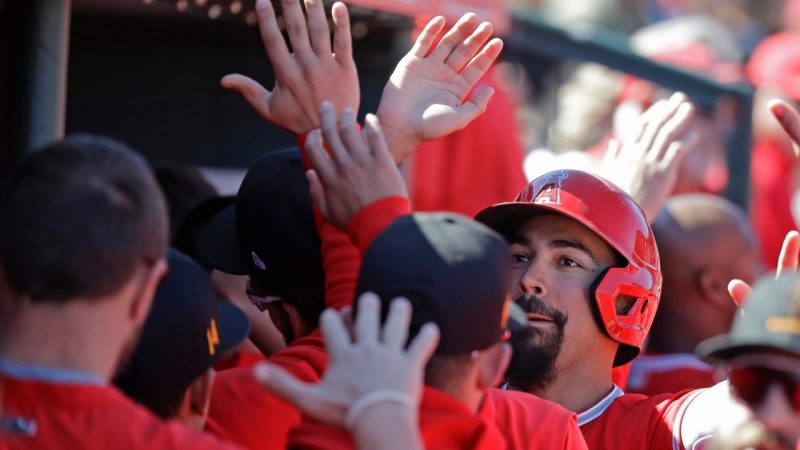 In L.A., he’ll join a number of other superstars like Mike Trout, Albert Pujols and Shohei Ohtani, as the Angels seek to build a team that soon makes its own push for a World Series championship. And if the talented-but-young Angels don’t know what they’re adding to their clubhouse with the veteran Rendon, they need only hear what Rendon’s former Nationals teammates have to say.

“He’s one of the best dudes I’ve ever come in contact with,” said utility player Matt Adams on the Sports Spectrum Podcast in November. Adams was Rendon’s teammate with Washington in 2018 and 2019.

“Doesn’t get too high, doesn’t get too low, and he’s always the same person day in and day out” Adams said. “I think that comes to being in the right frame of mind with the Lord … Seeing guys like that who go in on a daily basis and just perform at a high level, and no matter if they succeed, no matter if they fail, they know that at the end of the day they have Jesus Christ by their side, that’s a pretty cool thing to see.”

Catcher Matt Wieters, Rendon’s teammate in 2017 and 2018, was also struck by Rendon’s faith.

“He has an unbelievable deep-rooted faith, and when you’re around him and you get to know him, once you’re able to get him to open up, he’s not afraid to share his faith,” Wieters said.

With his move to the Angels comes a transition for Rendon, from being one of baseball’s up-and-coming players to being an established star on the field and a leader in the clubhouse. He can impart his vast baseball knowledge to the young guys who are not too different than he was only a few years ago. Even more importantly, he can also act as a mentor to the young Christ-followers on the Angels’ roster.

When Rendon arrived in Washington as a wide-eyed 22-year-old in 2013, still figuring out life and faith as a pro baseball player, he was met with a solid core of believers who showed him what it meant to be a follower of Christ in Major League Baseball. He saw their vulnerability and their genuine concern for each other as people. He was intrigued.