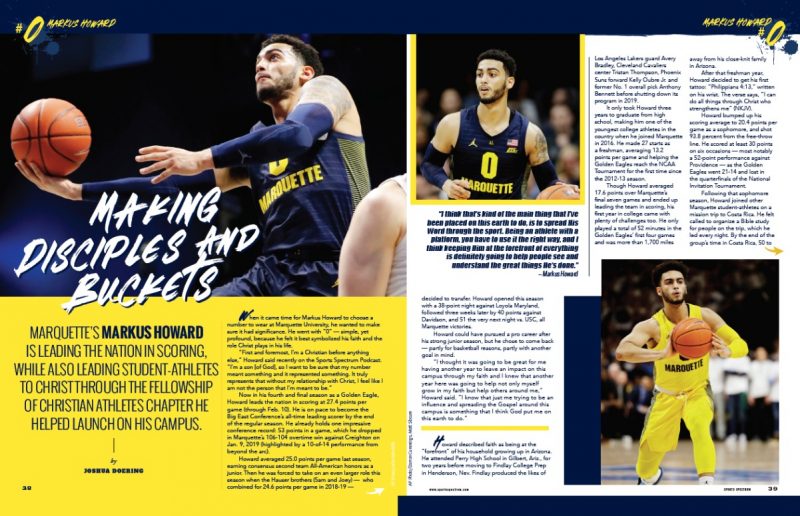 MARQUETTE’S MARKUS HOWARD IS LEADING THE NATION IN SCORING, WHILE ALSO LEADING STUDENT-ATHLETES TO CHRIST THROUGH THE FELLOWSHIP OF CHRISTIAN ATHLETES CHAPTER HE HELPED LAUNCH ON HIS CAMPUS.

When it came time for Markus Howard to choose a number to wear at Marquette University, he wanted to make sure it had significance. He went with “0” — simple, yet profound, because he felt it best symbolized his faith and the role Christ plays in his life.

“First and foremost, I’m a Christian before anything else,” Howard said recently on the Sports Spectrum Podcast. “I’m a son [of God], so I want to be sure that my number meant something and it represented something. It truly represents that without my relationship with Christ, I feel like I am not the person that I’m meant to be.”

Now in his fourth and final season as a Golden Eagle, Howard leads the nation in scoring at 27.4 points per game (through Feb. 10). He is on pace to become the Big East Conference’s all-time leading scorer by the end of the regular season. He already holds one impressive conference record: 53 points in a game, which he dropped in Marquette’s 106-104 overtime win against Creighton on Jan. 9, 2019 (highlighted by a 10-of-14 performance from beyond the arc).

Howard averaged 25.0 points per game last season, earning consensus second team All-American honors as a junior. Then he was forced to take on an even larger role this season when the Hauser brothers (Sam and Joey) — who combined for 24.6 points per game in 2018-19 — decided to transfer. Howard opened this season with a 38-point night against Loyola Maryland, followed three weeks later by 40 points against Davidson, and 51 the very next night vs. USC, all Marquette victories.

Howard could have pursued a pro career after his strong junior season, but he chose to come back — partly for basketball reasons, partly with another goal in mind.

“I thought it was going to be great for me having another year to leave an impact on this campus through my faith and I knew that another year here was going to help not only myself grow in my faith but help others around me,” Howard said. “I know that just me trying to be an influence and spreading the Gospel around this campus is something that I think God put me on this earth to do.”

“I think that’s kind of the main thing that I’ve been placed on this earth to do, is to spread His Word through the sport. Being an athlete with a platform, you have to use it the right way, and I think keeping Him at the forefront of everything is definitely going to help people see and understand the great things He’s done.” — Markus Howard 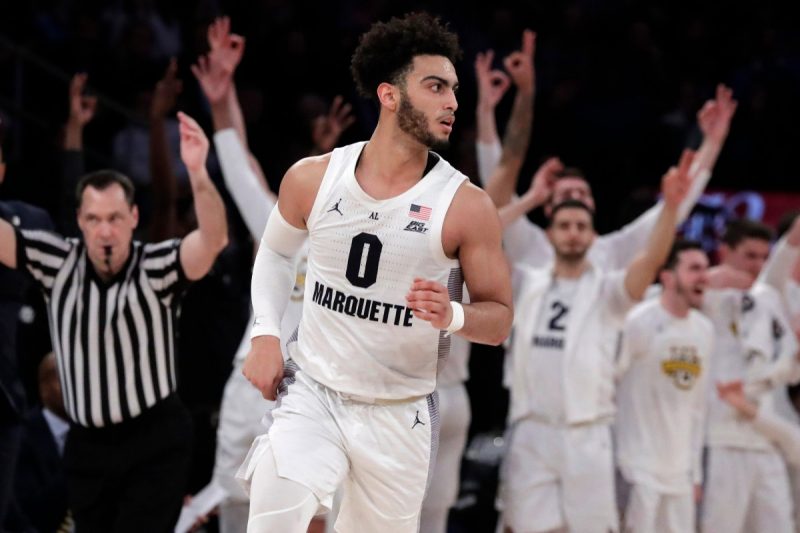 Howard described faith as being at the “forefront” of his household growing up in Arizona. He attended Perry High School in Gilbert, Ariz., for two years before moving to Findlay College Prep in Henderson, Nev. Findlay produced the likes of Los Angeles Lakers guard Avery Bradley, Cleveland Cavaliers center Tristan Thompson, Phoenix Suns forward Kelly Oubre Jr. and former No. 1 overall pick Anthony Bennett before shutting down its program in 2019.

It only took Howard three years to graduate from high school, making him one of the youngest college athletes in the country when he joined Marquette in 2016. He made 27 starts as a freshman, averaging 13.2 points per game and helping the Golden Eagles reach the NCAA Tournament for the first time since the 2012-13 season.

Though Howard averaged 17.6 points over Marquette’s final seven games and ended up leading the team in scoring, his first year in college came with plenty of challenges too. He only played a total of 52 minutes in the Golden Eagles’ first four games and was more than 1,700 miles away from his close-knit family in Arizona.

After that freshman year, Howard decided to get his first tattoo: “Philippians 4:13,” written on his wrist. The verse says, “I can do all things through Christ who strengthens me” (NKJV).

Howard bumped up his scoring average to 20.4 points per game as a sophomore, and shot 93.8 percent from the free-throw line. He scored at least 30 points on six occasions — most notably a 52-point performance against Providence — as the Golden Eagles went 21-14 and lost in the quarterfinals of the National Invitation Tournament.

Following that sophomore season, Howard joined other Marquette student-athletes on a mission trip to Costa Rica. He felt called to organize a Bible study for people on the trip, which he led every night. By the end of the group’s time in Costa Rica, 50 to 60 people were listening to Howard share the Gospel. 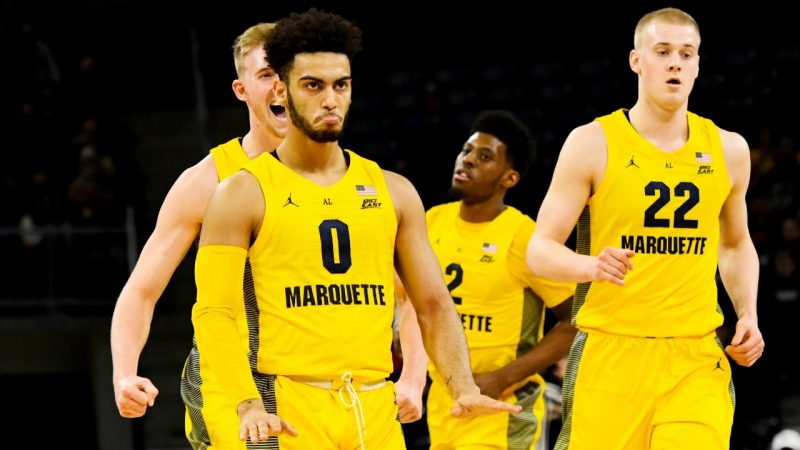 Howard wanted to bring that experience back to Marquette, so he started talking to the university’s support staff about the possibility of establishing a Fellowship of Christian Athletes chapter on campus. He got positive feedback, and went to work with men’s lacrosse player Nick Singleton to make their vision a reality. When Singleton graduated at the end of the 2018-19 school year, fellow men’s lacrosse player Jordan Schmid assumed his leadership role alongside Howard.

“[Howard’s] in the spotlight all the time, and I do feel bad for him because people only see him for basketball when I think he’s so much more,” Schmid told Sports Spectrum. “When I first met him, I saw someone who loved Jesus and cared for others more than anything else.”

Howard and Schmid now meet every week to plan the FCA meetings held on Sunday nights. They picked three themes to focus on during the fall semester, each for a month at a time: peace, love and faith. What Schmid described as a “consistent” seven to 10 people at FCA meetings last year has turned into 20 or 25 on a typical week this school year.

“We just want to try and make it an enjoyable experience for the student-athletes because it’s taking time out of a Sunday to talk about God and how He’s working in your life,” Howard said. “We want to be sure it’s comfortable for people, that they don’t feel any type of pressure, that they’re enjoying it, they’re having a good time, because that’s really what it’s all about.”

Even when Marquette lost to Wisconsin in Madison on a Sunday afternoon in November, Howard returned back to MU’s campus in Milwaukee and was at the FCA meeting that night. He told the group that’s where he wanted to be after a loss.

“To me, that shows so much because you just lost to our in-state rival; we talk about beating Wisconsin every single year,” Schmid said. “He came back and he was like, ‘I’m not gonna go sulk in my room and moan. I’m gonna go pour into others.’”

While FCA was growing off the court, Howard continued to thrive on it….