MAGAZINE: Golf Ministry 'In His Grip' Is Fueled By Gripping Vision

This story appears in the Winter 2019 issue of Sports Spectrum Magazine. For more in-depth feature stories like it, subscribe to our quarterly magazine for only $18. 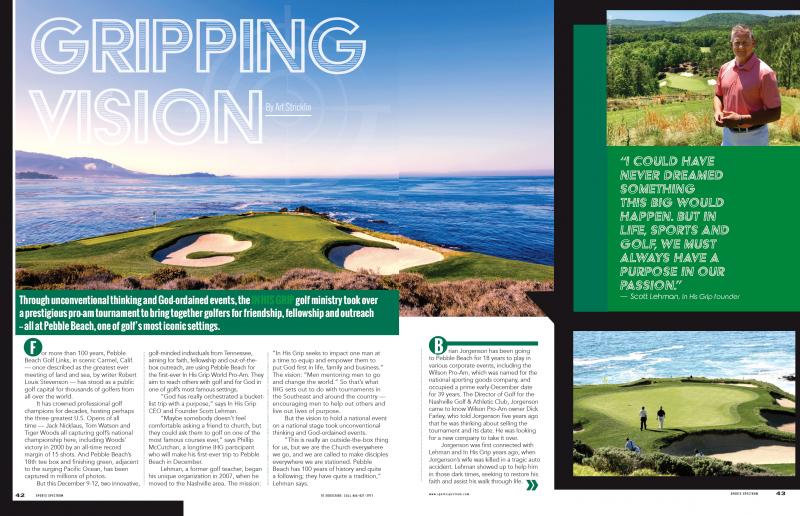 THROUGH UNCONVENTIONAL THINKING AND GOD-ORDAINED EVENTS,
THE IN HIS GRIP GOLF MINISTRY TOOK OVER A PRESTIGIOUS PRO-AM TOURNAMENT
TO BRING TOGETHER GOLFERS FOR FRIENDSHIP, FELLOWSHIP AND OUTREACH
— ALL AT PEBBLE BEACH, ONE OF GOLF’S MOST ICONIC SETTINGS.

For more than 100 years, Pebble Beach Golf Links, in scenic Carmel, Calif. — once described as the greatest ever meeting of land and sea, by writer Robert Louis Stevenson — has stood as a public golf capital for thousands of golfers from all over the world.

It has crowned professional golf champions for decades, hosting perhaps the three greatest U.S. Opens of all time — Jack Nicklaus, Tom Watson and Tiger Woods all capturing golf’s national championship here, including Woods’ victory in 2000 by an all-time record margin of 15 shots. And Pebble Beach’s 18th tee box and finishing green, adjacent to the surging Pacific Ocean, has been captured in millions of photos.

But this December 9-12, two innovative, golf-minded individuals from Tennessee, aiming for faith, fellowship and out-of-the-box outreach, are using Pebble Beach for the first-ever In His Grip World Pro-Am. They aim to reach others with golf and for God in one of golf’s most famous settings.

“God has really orchestrated a bucket-list trip with a purpose,” says In His Grip CEO and Founder Scott Lehman.

“Maybe somebody doesn’t feel comfortable asking a friend to church, but they could ask them to golf on one of the most famous courses ever,” says Phillip McCutchan, a longtime IHG participant who will make his first-ever trip to Pebble Beach in December.

Lehman, a former golf teacher, began his unique organization in 2007, when he moved to the Nashville area. The mission: “In His Grip seeks to impact one man at a time to equip and empower them to put God first in life, family and business.” The vision: “Men mentoring men to go and change the world.” So that’s what IHG sets out to do with tournaments in the Southeast and around the country — encouraging men to help out others and live out lives of purpose.

But the vision to hold a national event on a national stage took unconventional thinking and God-ordained events.

“This is really an outside-the-box thing for us, but we are the Church everywhere we go, and we are called to make disciples everywhere we are stationed. Pebble Beach has 100 years of history and quite a following; they have quite a tradition,” Lehman says.

“I could have never dreamed something this big would happen. But in life, sports and golf, we must always have a purpose in our passion.”
— Scott Lehman, In His Grip founder 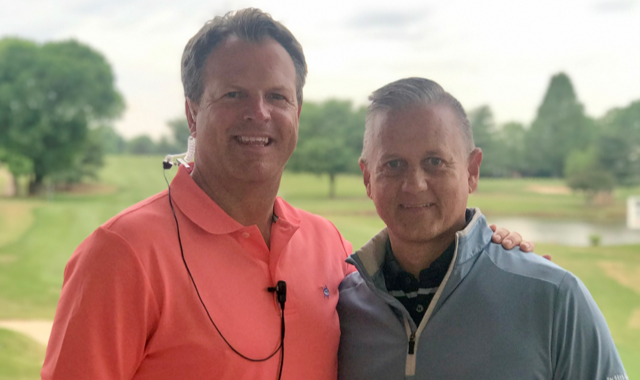 Brian Jorgenson has been going to Pebble Beach for 18 years to play in various corporate events, including the Wilson Pro-Am, which was named for the national sporting goods company, and occupied a prime early-December date for 39 years. The Director of Golf for the Nashville Golf & Athletic Club, Jorgenson came to know Wilson Pro-Am owner Dick Farley, who told Jorgenson five years ago that he was thinking about selling the tournament and its date. He was looking for a new company to take it over.

Jorgenson was first connected with Lehman and In His Grip years ago, when Jorgenson’s wife was killed in a tragic auto accident. Lehman showed up to help him in those dark times, seeking to restore his faith and assist his walk through life.

“God put Scott in my life to help me, like we all need help, and this golf tournament was about more than just golf, but how can we reach out to others,” Jorgenson says.

What if, Jorgenson wondered, we purchased the Wilson tournament, which was known nationally at a nationally-famous location, and turned it into an In His Grip world event to attract others for a mission?

“While we may not have had the highest bid, we had an eternal purpose and he (Farley) knew it would be in good hands,” Jorgenson says.

The first In His Grip World Pro-Am will draw 108 players, both professional and amateurs. It will be one of 13 pro-am tournaments Pebble Beach hosts each year. But it’s much more than just a tournament.

Before the sale was agreed to, Jorgenson and Lehman decided that a Sunday sunrise service, perhaps a first for the iconic resort, will take place near the 18th green. Lodging would be at the adjacent Lodge at Pebble Beach and Spanish Bay. And the four-day event would center on friendship, fellowship, ministry and outreach — all at a beautiful location.

“I never dreamed this big,” Lehman says. “Twelve years ago when I started In His Grip, I could have never dreamed something this big would happen. But in life, sports and golf, we must always have a purpose in our passion.”

That was a focus in founding In His Grip:

“My goal is to create an atmosphere of fellowship, and I envision this event affording men an opportunity to develop deeper personal relationships with each other through a common love of golf.”
— Brian Jorgenson, golf professional

While most professional sports leagues and teams have regular chapel and ministry programs — like the PGA Tour chapel program (as featured in Sports Spectrum’s Fall 2018 issue) — Lehman said what was missing was a way to reach amateur golfers and golf pros who are not part of a full-time organization. Or those who are just looking for like-minded fellowship with golfers and newcomers from a faith perspective.

“Golfers are a very unique bunch,” says Wayne Brantley, who works in the computer software profession. “You may enjoy playing golf with somebody, but you don’t want them to feel you’re just out there to invite them to church or to convert them. This is a great way to reach out and share your faith, doing what you already love to do.”

That’s what happened to Brantley, playing golf with a good friend in the Chattanooga, Tenn., area.

“I was playing golf one day and my friend had a small bag tag on his club which said, ‘In His Grip,’ and so I asked him about it. He didn’t say much, but by the time we got to the back nine, I asked him, ‘Now tell me, what does that tag really mean?’

“It’s a good, open-ended way to involve others, and going to Pebble Beach is a cool thing God worked out with a real special aura around it. It’s a great opportunity to get the name out,” Brantley says.

That’s what Jorgenson was looking to do when he decided to make In His Grip the beneficiary of the tournament at Pebble Beach.

“In Proverbs 27:17 it reads, ‘Iron sharpens iron and one man sharpens another,’” Jorgenson said. “My goal is to create an atmosphere of fellowship, and I envision this event affording men an opportunity to develop deeper personal relationships with each other through a common love of golf.”

He already hosts an IHG Bible study at Nashville Golf & Athletic Club, through which he has seen 30-50 golf pros and golf-loving amateurs come together to see how they can be better people, husbands, fathers and friends.

“When I first came out (in the golf industry) I didn’t know what it was like to live a life of purpose and let me honor God and my faith. Now we’re impacting golf pros that are not afraid to live out their lives of importance,” Jorgenson says.

While the biggest math in the IHG World Pro-Am may be the scores recorded on the scorecards at the majestic setting, McCutchan, the longtime IHG participant, said the organization started with simple math, which still works today.

“Our goal has always been to expose somebody to the Lord, then expose two, and then add two,” he says. “I think in golf or any sport, what people want to hear is that they’re not alone, you have somebody you can do work, life, church and golf [with]. Maybe the same approach doesn’t work with everybody, but what we want to do is plant the seed.”

With the initial showcase tournament at Pebble Beach this year, Lehman said he is already thinking about other public golf destinations, like possibly Pinehurst (N.C.) or Sea Island (Ga.), to continue the unique and iconic locations to reach others for an eternal purpose.

“As we look down the fairways for the next 40 years, we will be leaning into Proverbs 3:5-6: ‘Trust in the Lord with all your heart and lean not on your own understanding; in all your ways submit to Him and He will make your paths straight.’”

This story appears in the Winter 2019 issue of Sports Spectrum Magazine. For more in-depth feature stories like it, subscribe to our quarterly magazine for only $18.