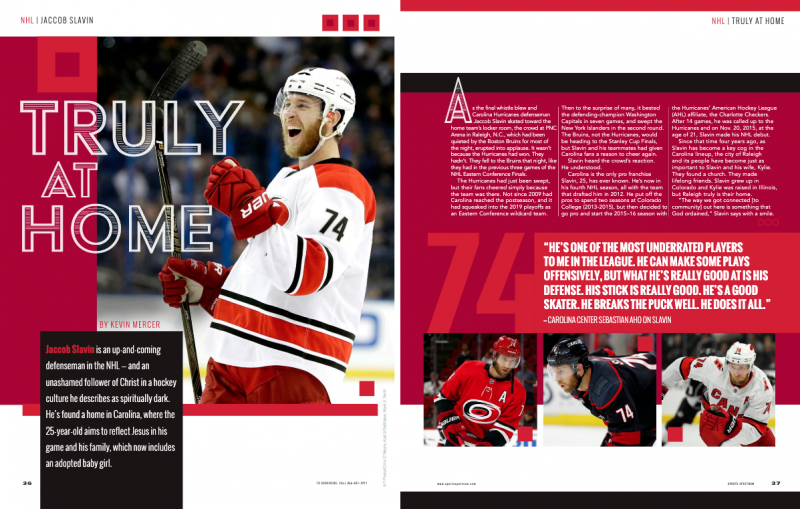 JACCOB SLAVIN IS AN UP-AND-COMING DEFENSEMAN IN THE NHL — AND AN UNASHAMED FOLLOWER OF CHRIST IN A HOCKEY CULTURE HE DESCRIBES AS SPIRITUALLY DARK. HE’S FOUND A HOME IN CAROLINA, WHERE THE 25-YEAR-OLD AIMS TO REFLECT JESUS IN HIS GAME AND HIS FAMILY, WHICH NOW INCLUDES AN ADOPTED BABY GIRL.

As the final whistle blew and Carolina Hurricanes defenseman Jaccob Slavin skated toward the home team’s locker room, the crowd at PNC Arena in Raleigh, N.C., which had been quieted by the Boston Bruins for most of the night, erupted into applause. It wasn’t because the Hurricanes had won. They hadn’t. They fell to the Bruins that night, like they had in the previous three games of the NHL Eastern Conference Finals.

The Hurricanes had just been swept, but their fans cheered simply because the team was there. Not since 2009 had Carolina reached the postseason, and it had squeaked into the 2019 playoffs as an Eastern Conference wildcard team. Then to the surprise of many, it bested the defending-champion Washington Capitals in seven games, and swept the New York Islanders in the second round. The Bruins, not the Hurricanes, would be heading to the Stanley Cup Finals, but Slavin and his teammates had given Carolina fans a reason to cheer again.

Carolina is the only pro franchise Slavin, 25, has ever known. He’s now in his fourth NHL season, all with the team that drafted him in 2012. He put off the pros to spend two seasons at Colorado College (2013-2015), but then decided to go pro and start the 2015–16 season with the Hurricanes’ American Hockey League (AHL) affiliate, the Charlotte Checkers. After 14 games, he was called up to the Hurricanes and on Nov. 20, 2015, at the age of 21, Slavin made his NHL debut.

Since that time four years ago, as Slavin has become a key cog in the Carolina lineup, the city of Raleigh and its people have become just as important to Slavin and his wife, Kylie. They found a church. They made lifelong friends. Slavin grew up in Colorado and Kylie was raised in Illinois, but Raleigh truly is their home.

“The way we got connected [to community] out here is something that God ordained,” Slavin says with a smile.

“As Christians, we’re called to reflect Jesus in our lives. Being able to do that is huge, and guys see something different about you in the way you live your life or what you put your priorities in.” — Jaccob Slavin 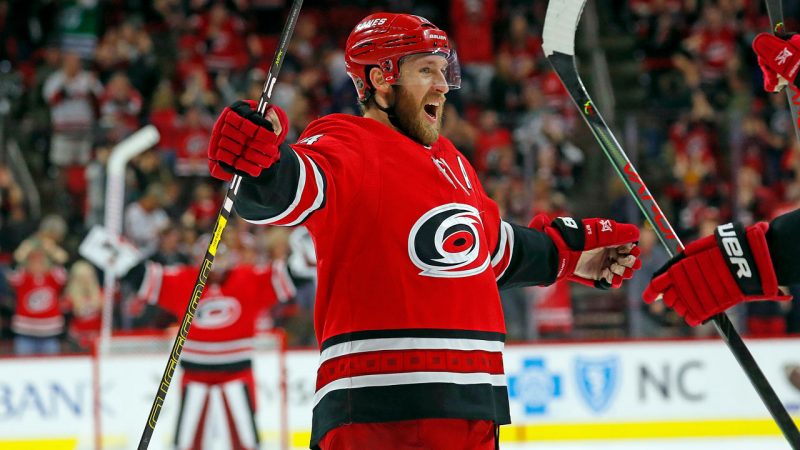 Like so many cheering Hurricanes fans in the stands that playoff night, Slavin’s mind was already shifting to 2019-20. He had tasted playoff hockey, and he wanted more.

“We wanted to build on what we ended with last year,” Slavin told Sports Spectrum after a recent practice. “I think last year was a very successful year for us getting back to the playoffs for the first time and obviously going as deep as we did, but it left everyone wanting a little bit more. Obviously, our goal is to get back there and go farther.”

The Hurricanes started the 2019-20 season just like they ended the last, going 8-3-1 in October. But an early November losing streak showed Carolina it still has work to do.

Slavin, meanwhile, continued his strong play. He amassed nine assists and two goals, and ranked second on the team in plus/minus rating (5) through Nov. 10. But his offense is a bonus. He is known for his defense, which has helped to stifle many teams’ best attackers.

“Watching him, he’s one of the most underrated players to me in the league,” Carolina center Sebastian Aho says of Slavin. “He can make some plays offensively, but what he’s really good at is his defense. His stick is really good. He’s a good skater. He breaks the puck well. He does it all.”

Slavin’s level of play this season has only served to validate his playoff performance last spring and the league-wide acclaim he garnered in the process. In 15 total playoff games last year, Slavin racked up 11 assists — a franchise record for a defenseman in a single postseason. Nine of those came in the series against the Capitals, one of the Stanley Cup favorites, including three on the road in Game 7 as the Hurricanes prevailed 4-3 in two overtimes.

For the nearly month-long playoff run, praise poured in from fans and experts alike. Finally, the hockey world had noticed what the Hurricanes had known for years.

In 2017, Carolina signed Slavin to a seven-year contract extension with an average annual salary of $5.3 million. Slavin didn’t stop impressing afterward. For this season, the coaching staff named him an alternate captain. His teammates rave about him as a defender and as a person.

Slavin easily could have let himself revel in his newfound fame. Instead, he pointed back to his Lord and Savior.

“You’re not going to be able to control what people say and so thankfully they were saying good things, but at the end of the day, it’s not about me in this game,” Slavin says. “It’s about the platform that God’s given me, so He was just giving me more opportunities to shed light on His glory during that time.”

Faith is always Slavin’s foundation in the midst of a hockey culture he himself describes as spiritually dark. The opportunities to speak out about his faith are scarce, with few believing teammates and a volunteer chaplain. (Teams in other leagues sometimes employ chaplains or at least compensate them for their time.) Slavin, however, seeks to let his light shine in all he says and does.

“As Christians, we’re called to reflect Jesus in our lives,” Slavin says…