MAGAZINE: Las Vegas' Kelsey Plum and A'ja Wilson are Aces in the Faith 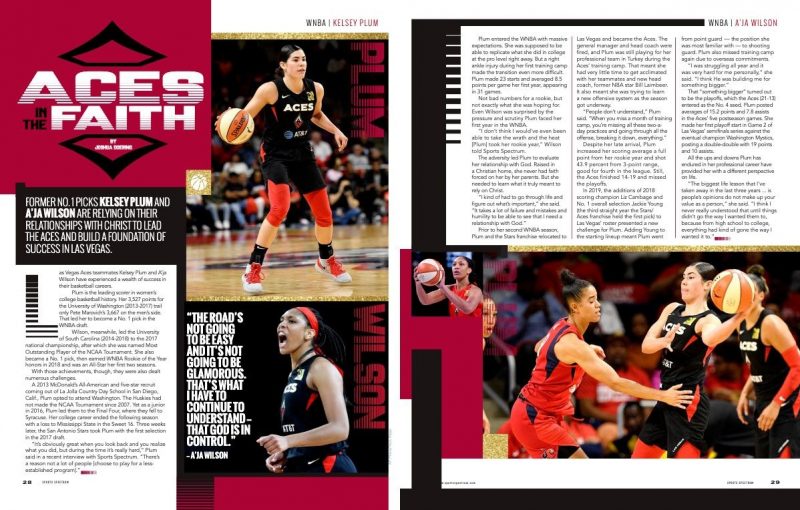 FORMER NO. 1 PICKS KELSEY PLUM AND A’JA WILSON ARE RELYING ON THEIR RELATIONSHIPS WITH CHRIST TO LEAD THE ACES AND BUILD A FOUNDATION OF SUCCESS IN LAS VEGAS.

Las Vegas Aces teammates Kelsey Plum and A’ja Wilson have experienced a wealth of success in their basketball careers.

Plum is the leading scorer in women’s college basketball history. Her 3,527 points for the University of Washington (2013-2017) trail only Pete Maravich’s 3,667 on the men’s side. That led her to become a No. 1 pick in the WNBA draft.

Wilson, meanwhile, led the University of South Carolina (2014-2018) to the 2017 national championship, after which she was named Most Outstanding Player of the NCAA Tournament. She also became a No. 1 pick, then earned WNBA Rookie of the Year honors in 2018 and was an All-Star her first two seasons.

With those achievements, though, they were also dealt numerous challenges.

A 2013 McDonald’s All-American and five-star recruit coming out of La Jolla Country Day School in San Diego, Calif., Plum opted to attend Washington. The Huskies had not made the NCAA Tournament since 2007. Yet as a junior in 2016, Plum led them to the Final Four, where they fell to Syracuse. Her college career ended the following season with a loss to Mississippi State in the Sweet 16. Three weeks later, the San Antonio Stars took Plum with the first selection in the 2017 draft.

“It’s obviously great when you look back and you realize what you did, but during the time it’s really hard,” Plum said in a recent interview with Sports Spectrum. “There’s a reason not a lot of people [choose to play for a less-established program].”

Plum entered the WNBA with massive expectations. She was supposed to be able to replicate what she did in college at the pro level right away. But a right ankle injury during her first training camp made the transition even more difficult. Plum made 23 starts and averaged 8.5 points per game her first year, appearing in 31 games.

Not bad numbers for a rookie, but not exactly what she was hoping for. Even Wilson was surprised by the pressure and scrutiny Plum faced her first year in the WNBA.

“I don’t think I would’ve even been able to take the wrath and the heat [Plum] took her rookie year,” Wilson told Sports Spectrum.

The adversity led Plum to evaluate her relationship with God. Raised in a Christian home, she never had faith forced on her by her parents. But she needed to learn what it truly meant to rely on Christ.

“I kind of had to go through life and figure out what’s important,” she said. “It takes a lot of failure and mistakes and humility to be able to see that I need a relationship with God.”

Prior to her second WNBA season, Plum and the Stars franchise relocated to Las Vegas and became the Aces. The general manager and head coach were fired, and Plum was still playing for her professional team in Turkey during the Aces’ training camp. That meant she had very little time to get acclimated with her teammates and new head coach, former NBA star Bill Laimbeer. It also meant she was trying to learn a new offensive system as the season got underway.

“People don’t understand,” Plum said. “When you miss a month of training camp, you’re missing all these two-a-day practices and going through all the offense, breaking it down, everything.”

Despite her late arrival, Plum increased her scoring average a full point from her rookie year and shot 43.9 percent from 3-point range, good for fourth in the league. Still, the Aces finished 14-19 and missed the playoffs.

In 2019, the additions of 2018 scoring champion Liz Cambage and No. 1 overall selection Jackie Young (the third straight year the Stars/Aces franchise held the first pick) to Las Vegas’ roster presented a new challenge for Plum. Adding Young to the starting lineup meant Plum went from point guard  — the position she was most familiar with — to shooting guard. Plum also missed training camp again due to overseas commitments.

“I was struggling all year and it was very hard for me personally,” she said. “I think He was building me for something bigger.”

That “something bigger” turned out to be the playoffs, which the Aces (21-13) entered as the No. 4 seed. Plum posted averages of 15.2 points and 7.8 assists in the Aces’ five postseason games. She made her first playoff start in Game 2 of Las Vegas’ semifinals series against the eventual champion Washington Mystics, posting a double-double with 19 points and 10 assists.

All the ups and downs Plum has endured in her professional career have provided her with a different perspective on life.

“The biggest life lesson that I’ve taken away in the last three years … is people’s opinions do not make up your value as a person,” she said. “I think I never really understood that until things didn’t go the way I wanted them to, because from high school to college, everything had kind of gone the way I wanted it to.”

“I kind of had to go through life and figure out what’s important. It takes a lot of failure and mistakes and humility to be able to see that I need a relationship with God.” — Kelsey Plum 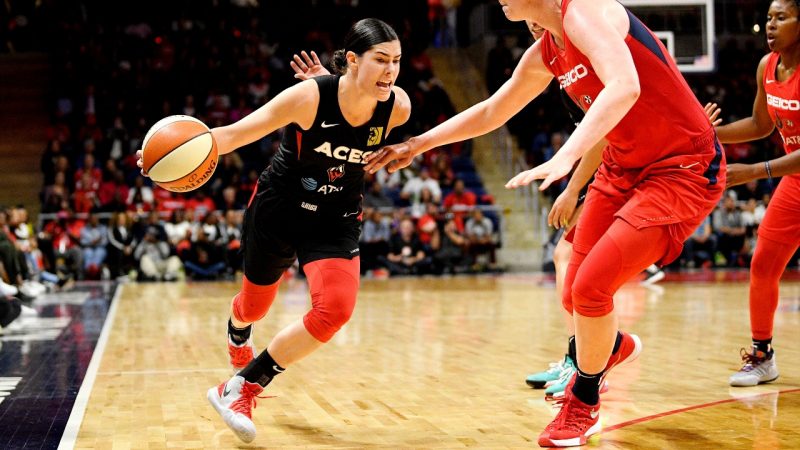 As Plum made the move from San Antonio to Las Vegas, one of her new teammates became Wilson, the 2018 consensus college player of the year whom the Aces took with the first overall pick in the 2018 draft.

A native of South Carolina, Wilson says she was “dang near” raised in the church. Her grandfather was a minister and Wilson’s family was heavily involved in the church he pastored.

“I don’t have that hardcore story where I had a tough life, had a tough childhood,” she said. “I was just kind of normal. I knew, and my parents really kind of made sure I understood, that this is a gift from God and I can’t take that for granted. Everything that I did, I looked at it not just as luck but as blessings.”

When it came time to choose a college, Wilson decided to stay near home and play for coach Dawn Staley and the South Carolina Gamecocks. She made an immediate impact as a freshman, contributing 13.1 points on a team that reached
the Final Four.

The Gamecocks returned to the national semifinals her junior season, and Wilson recorded double-doubles in both Final Four games. She put up 23 points and 10 rebounds in the national championship game, which South Carolina won 67-55 over Mississippi State for its first national title in program history.

Two days before her college career came to a close the next season with a loss to UConn in the Elite Eight, Wilson wrote a piece for the Players’ Tribune. In it, she discussed being diagnosed with dyslexia as a sophomore in high school and the role her learning disability played in shaping her as a person.

“It was tough because I didn’t want people to think I had a weakness and I was a failure and things like that,” Wilson said. “At the end of the day, I really grew up when I released [the Players’ Tribune story] and I wouldn’t trade it for the world.”

When Wilson got to South Carolina, she started saying grace before team meals. That soon turned into reading Scripture out loud to the team in the locker room before games, which helped her become more confident reading and speaking in public.

“It really helped me get closer to my teammates and at the same time, it helped me just kind of become that leader, and then that’s when it turned into our chaplain giving me scriptures to read before pregame,” she said. 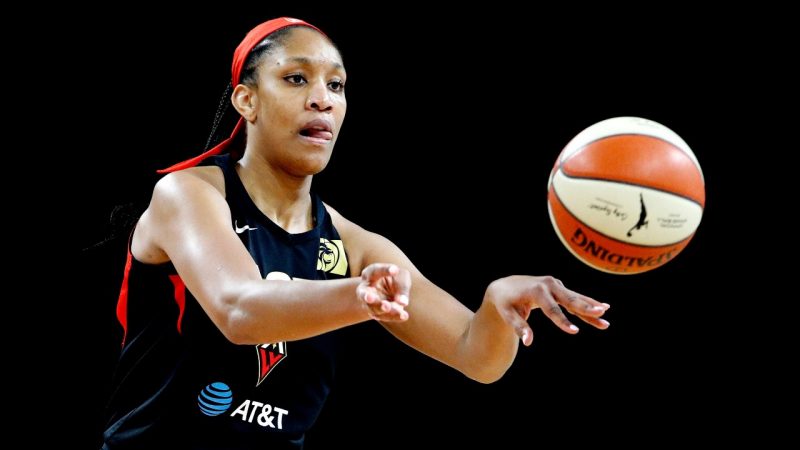 Wilson started all 33 games for the Aces as a rookie and finished sixth in the WNBA in scoring at 20.7 points per game en route to winning Rookie of the Year. She followed that up with another All-Star selection and an average of 16.5 points per contest in 2019.

Wilson says prayer has played a crucial role throughout her life…