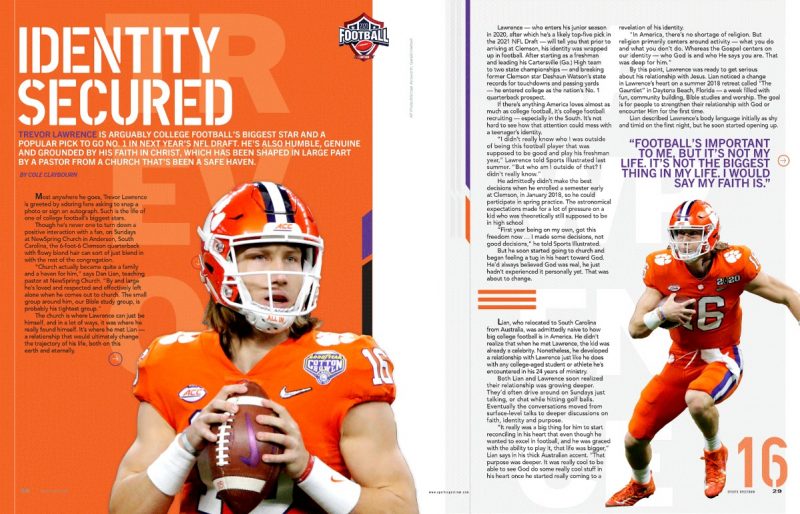 TREVOR LAWRENCE IS COLLEGE FOOTBALL’S BIGGEST STAR AND A POPULAR PICK TO GO NO. 1 IN NEXT YEAR’S DRAFT. HE’S ALSO HUMBLE, GENUINE AND GROUNDED BY HIS FAITH IN CHRIST, WHICH HAS BEEN SHAPED BY A PASTOR AND A CHURCH THAT’S BEEN A SAFE HAVEN.

Most anywhere he goes, Trevor Lawrence is greeted by adoring fans asking to snap a photo or sign an autograph. Such is the life of one of college football’s biggest stars.

Though he’s never one to turn down a positive interaction with a fan, on Sundays at NewSpring Church in Anderson, South Carolina, the 6-foot-6 Clemson quarterback with flowy blond hair can sort of just blend in with the rest of the congregation.

“Church actually became quite a family and a haven for him,” says Dan Lian, teaching pastor at NewSpring Church. “By and large he’s loved and respected and effectively left alone when he comes out to church. The small group around him, our Bible study group, is probably his tightest group.”

The church is where Lawrence can just be himself, and in a lot of ways, it was where he really found himself. It’s where he met Lian — a relationship that would ultimately change the trajectory of his life, both on this earth and eternally.

Lawrence — who’s in is junior season in 2020, after which he’s a likely top-five pick in the 2021 NFL Draft — will tell you that prior to arriving at Clemson, his identity was wrapped up in football. After starting as a freshman and leading his Cartersville (Ga.) High team to two state championships — and breaking former Clemson star Deshaun Watson’s state records for touchdowns and passing yards — he entered college as the nation’s No. 1 quarterback prospect.

If there’s anything America loves almost as much as college football, it’s college football recruiting — especially in the South. It’s not hard to see how that attention could mess with a teenager’s identity.

He admittedly didn’t make the best decisions when he enrolled a semester early at Clemson, in January 2018, so he could participate in spring practice. The astronomical expectations made for a lot of pressure on a kid who was theoretically still supposed to be in high school

“First year being on my own, got this freedom now … I made some decisions, not good decisions,” he told Sports Illustrated.

But he soon started going to church and began feeling a tug in his heart toward God. He’d always believed God was real, he just hadn’t experienced it personally yet. That was about to change.

“Football’s important to me, but it’s not my life. It’s not the biggest thing in my life. I would say my faith is.”
— Trevor Lawrence

Lian, who relocated to South Carolina from Australia, was admittedly naive to how big college football is in America. He didn’t realize that when he met Lawrence, the kid was already a celebrity. Nonetheless, he developed a relationship with Lawrence just like he does with any college-aged student or athlete he’s encountered in his 24 years of ministry.

Both Lian and Lawrence soon realized their relationship was growing deeper. They’d often drive around on Sundays just talking, or chat while hitting golf balls. Eventually the conversations moved from surface-level talks to deeper discussions on faith, identity and purpose.

“It really was a big thing for him to start reconciling in his heart that even though he wanted to excel in football, and he was graced with the ability to play it, that life was bigger,” Lian says in his thick Australian accent. “That purpose was deeper. It was really cool to be able to see God do some really cool stuff in his heart once he started really coming to a revelation of his identity.

“In America, there’s no shortage of religion. But religion primarily centers around activity — what you do and what you don’t do. Whereas the Gospel centers on our identity — who God is and who He says you are. That was deep for him.”

By this point, Lawrence was ready to get serious about his relationship with Jesus. Lian noticed a change in Lawrence’s heart on a summer 2018 retreat called “The Gauntlet” in Daytona Beach, Florida — a week filled with fun, community building, Bible studies and worship. The goal is for people to strengthen their relationship with God or encounter Him for the first time.

Lian described Lawrence’s body language initially as shy and timid on the first night, but he soon started opening up.

Lawrence returned to Clemson for his freshman season with something “real,” Lian says.

It was another major step in the spiritual and emotional maturation of Lawrence, who found himself in a QB battle once fall camp started. Four games into the season, Lawrence officially beat out Kelly Bryant for the starting quarterback job, and he eventually became the first true freshman quarterback in more than 30 years to lead a team to the national championship.

He had his Tigers team right back in the title game for the 2019 season, but fell to Heisman Trophy winner and No. 1 draft pick Joe Burrow and the LSU Tigers.

Despite the immense pressure Lawrence has dealt with since he set foot on campus, he’s earned praise for his calm demeanor and character, both of which stem from his faith in Christ.

“That’s just always my personality,” he said during a September 2018 press conference. “Football’s important to me, but it’s not my life. It’s not the biggest thing in my life. I would say my faith is. That just comes from knowing who I am outside of that. No matter how the big the situation is, it’s not going to define me.”

His identity is no longer marked by his football accomplishments, he says. It’s now in Christ.

“It really does not matter what people think of me or how good they think I play,” he said in the press conference. “That does not really matter. That has been a big thing for me, in my situation, just knowing that and having confidence in that.”

Clemson head coach Dabo Swinney, a man vocal about his own faith, has often praised Lawrence for his character and how he lets his faith guide who he is as a player and a person.

“He’s got a great family,” Swinney told ESPN last season. “He’s got a great faith and very strong foundation to his life that serves him well in all these aspects, but also leans on the people that are in his circle if he ever gets overwhelmed with anything.” 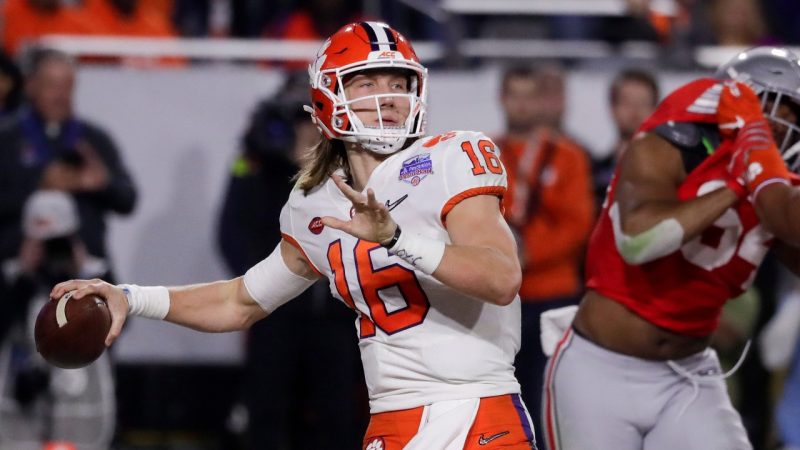 Lawrence has blossomed into arguably the game’s biggest star — the face of college football. It’s propelled him to lead not just on the field and in the locker room, but also on campus and, more recently, on a national stage.

In June, when racial unrest began to take center stage across the nation, Lawrence joined Swinney in addressing students during a campus-wide peaceful protest against racial injustice. Lawrence spoke eloquently, imploring the crowd to be willing to get “uncomfortable” and challenge presuppositions about race.

“Recently, I realized that the America that I experience is different from the America that my brothers and sisters experience,” he told the crowd. “I’m on the journey now of discovering how I can use my voice, platform and influence to lift others up and stand for those who shouldn’t have to stand alone.”

He also cited 1 Peter 4:8 (ESV), which says, “Above all, keep loving one another earnestly, since love covers a multitude of sins.”

“So let’s continue to listen, learn and love even when it is uncomfortable — especially when it’s uncomfortable — because this is when change happens and the world, for generations to come, will be different,” he concluded. “It’ll be better…”