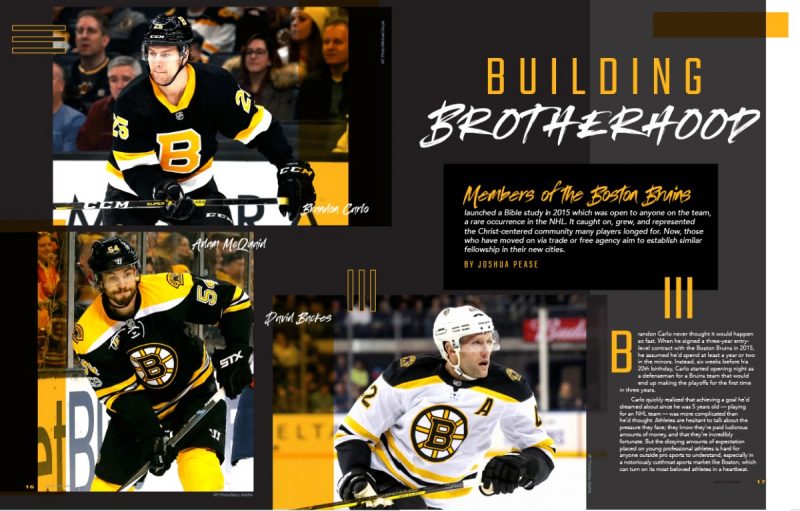 Members of the Boston Bruins launched a Bible study in 2015 which was open to anyone on the team, a rare occurrence in the NHL. It caught on, grew, and represented the Christ-centered community many players longed for. Now, those who have moved on via trade or free agency aim to establish similar fellowship in their new cities.

Brandon Carlo never thought it would happen so fast. When he signed a three-year entry-level contract with the Boston Bruins in 2015, he assumed he’d spend at least a year or two in the minors. Instead, six weeks before his 20th birthday, Carlo started opening night as a defenseman for a Bruins team that would end up making the playoffs for the first time in three years.

Carlo quickly realized that achieving a goal he’d dreamed about since he was 5 years old — playing for an NHL team — was more complicated than he’d thought. Athletes are hesitant to talk about the pressure they face; they know they’re paid ludicrous amounts of money, and that they’re incredibly fortunate. But the dizzying amounts of expectation placed on young professional athletes is hard for anyone outside pro sports to understand, especially in a notoriously cutthroat sports market like Boston, which can turn on its most beloved athletes in a heartbeat.

“[Making an NHL team] is something that you think would be the most fulfilling thing that you could possibly achieve,” Carlo recently told Sports Spectrum. “And then when you get there, it is fantastic, and it’s such a blessing, but it’s not as fulfilling as you thought it would be. There’s a lot of days where you’re grinding and you’re having a tough time, and things aren’t going your way. And it’s like, ‘What do you have to lean on?’”

Moments like this are crucial turning points for many young, successful athletes. Some crumble under the pressure, while others let their ascendant fame go to their heads. Carlo, however, just so happened to play on one of the only NHL teams with a thriving Bible study. Outspoken Christian faith is still rare in NHL team cultures, and yet the Boston Bruins have quietly had Bible studies where 10-12 players regularly attend. And when members of this Bible study are traded to other teams, they bring with them a passion not just for hockey, but to replicate this fellowship in their new city.

In a 2015 article in the Boston Globe, Adam McQuaid, a Bruins defenseman at the time, opened up about his journey of being more public with his Christian faith, and how stand-offish or directly hostile the hockey world can be to religion. The article caught the attention of leaders at Hockey Ministries International (HMI), who told McQuaid they’d long wanted to start a chapel with the Bruins, but never had a good point of contact.

“We had a chapel [when I was playing] in the minor league in Providence and that was the first time I’d even heard of having a chapel in sports,” McQuaid recalls. “There were quite a few guys that went, and it just was something that I missed when I moved up to play in the NHL. So when HMI reached out to me I jumped on board.”

McQuaid contacted the pastor of his church, David Ripper, and together the two of them waded into unfamiliar waters: McQuaid actively reaching out to his teammates, and Ripper going behind the scenes of a professional sports environment for the first time.

“I remember the first time I did chapel,” says Ripper, lead pastor of Crossway Christian Church in New Hampshire. “The Bruins used to be at this really rinky-dink, old practice facility … and it’s like, I have to knock on this back door. And this big and burly security guard kinda looks at me like, ‘Who the heck are you?’ And I said, ‘I’m here to be with McQuaid,’ and he says ‘Yeah, you’re on the list.’

“I walk in and it’s all these big dudes skating around, and I’m just like, ‘What in the world am I doing here?’ And I felt God just telling me, ‘Dave, just so you know, it’s not gonna be about you.’”

“There’s a lot of loneliness and isolation [among professional athletes], and I really hope that these players will be able to take what God has done here with them, if they go elsewhere, to be able to bring this to their next teams.” — Pastor Dave Ripper

The first year of the chapel consisted of just McQuaid and Ripper, and maybe one or two other players who would occasionally attend. Then, the following year, forward David Backes signed as a free agent with Boston.

One of the first things Backes wanted to do when he moved to town was meet up with McQuaid. In Backes’ previous three years with the St. Louis Blues, he’d tried to get a chapel program up and running, but it was always sparsely attended. Now that he had signed a five-year deal with the Bruins, Backes dreamed of something better. Ripper said that Backes joining was the catalyst for the group’s growth, calling Backes “one of the best leaders I’ve ever been around.”

“It started with McQuaid and [Boston defenseman Kevan Miller], and myself,” Backes says. “And then all of a sudden it was like … next thing you know it’s eight to 10 guys at breakfast with a couple coming in and out based on whether they had treatment that morning; one of the trainers was getting involved. So it was just one of those things that I wanted to [pursue] … I was being intentional with trying to make an impact in the Kingdom while I had this new group of men to influence with Adam’s and Kevan’s assistance.”

Ripper focused on creating a safe environment where a bunch of high-achieving, competitive athletes could let down their guard and be honest about their struggles. Many meetings would happen over breakfast, where Ripper would cut past superficialities and routinely ask players, “How’s your soul?” Ripper is quick to say there was no magic formula to the Bible study’s success, certainly not any brilliance on his part. Rather, he feels like God placed him in the right place, at the right time.

“[These players] are no different than anyone else,” he says. “Some of them will make more money in one season than I’ll make in a lifetime, but they’re not any happier … and I think there was a solidarity that was found amidst that. There’s a human hunger that we all have for that type of connectivity, and I think I was fortunate enough to be blessed to be in the role to help facilitate how the Lord wanted to build a solidarity amongst the guys. And I think that’s why more players joined, because they saw this connection that some of the players share together that was something more profound than even the best connection you can have on the ice.”

McQuaid also notes there wasn’t a magic formula. While he is quick to compliment Ripper’s job, he also says there was an influx of players to the team who kept showing interest in the chapel. “It wasn’t anything any one of us was doing,” McQuaid says, “it just grew.”

“It’s the ability to just check in with each other, to know the intimate parts or struggles that are going on outside the ice.” — David Backes

And as it grew, the players noticed how it improved team chemistry on the ice. McQuaid says that every team he has played for wants players to have characteristics that mesh with what it means to be a follower of Jesus, and having a chapel program only helps facilitate that. Backes believes the trust and camaraderie a Bible study builds is absolutely integral to how a player performs on the ice, and with his teammates. He acknowledges it’s easy for locker rooms to become very competitive places, where players are always wondering if someone is out to get their job, or has an angle they’re playing in their interactions with other players. But the trust built in the Bible study created a safe space to both love and challenge each other, on and off the ice.

“It’s the ability to just check in with each other, to know the intimate parts or struggles that are going on outside the ice — personal family issues, an illness in the family, other things that are going on that without that setting, without that openness and that safe space, you don’t get to share those things,” Backes says. “To me, that’s such a great bond builder that does translate on the ice, but gives you some real familial relationships, especially when you’re in a town that’s 1,500 miles away from your blood family. So to me, that sort of impact on your day-to-day life and your professional life shows up, I think, in the success that that group has because they’re willing to be open.

“There are times maybe during the game where you see that a guy, I don’t wanna say ‘checked out,’ but maybe is not as focused on the game, but you know what’s going on in his life. And you go wrap your arm around him and be like, ‘Hey, I know you got that going on, if you can just focus for another half hour or one more period, let’s grab a drink after and we can talk about it…