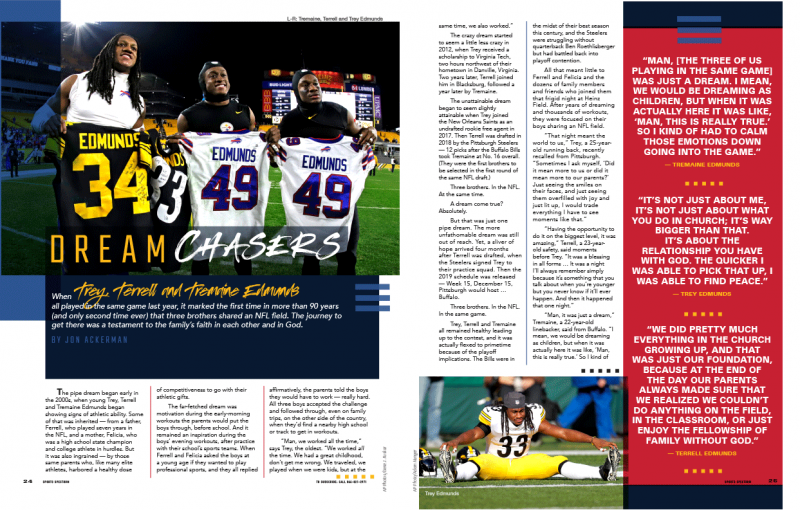 When Trey, Terrell and Tremaine Edmunds all played in the same game last year, it marked the first time in more than 90 years (and only second time ever) that three brothers shared an NFL field. The journey to get there was a testament to the family’s faith in each other and in God.

The pipe dream began early in the 2000s, when young Trey, Terrell and Tremaine Edmunds began showing signs of athletic ability. Some of that was inherited — from a father, Ferrell, who played seven years in the NFL, and a mother, Felicia, who was a high school state champion and college athlete in hurdles. But it was also ingrained — by those same parents who, like many elite athletes, harbored a healthy dose of competitiveness to go with their athletic gifts.

The far-fetched dream was motivation during the early-morning workouts the parents would put the boys through, before school. And it remained an inspiration during the boys’ evening workouts, after practice with their school’s sports teams. When Ferrell and Felicia asked the boys at a young age if they wanted to play professional sports, and they all replied affirmatively, the parents told the boys they would have to work — really hard. All three boys accepted the challenge and followed through, even on family trips, on the other side of the country, when they’d find a nearby high school or track to get in workouts.

The crazy dream started to seem a little less crazy in 2012, when Trey received a scholarship to Virginia Tech, two hours northwest from their hometown of Danville, Virginia. Two years later, Terrell joined him in Blacksburg, followed a year later by Tremaine.

The unattainable dream began to seem slightly attainable when Trey joined the New Orleans Saints as an undrafted rookie free agent in 2017. Then Terrell was drafted in 2018 by the Pittsburgh Steelers — 12 picks after the Buffalo Bills took Tremaine at No. 16 overall. (They were the first brothers to be selected in the first round of the same NFL draft.)

Three brothers. In the NFL. At the same time.

But that was just one pipe dream. The more unfathomable dream was still out of reach. Yet, a sliver of hope arrived four months after Terrell was drafted, when the Steelers signed Trey to their practice squad. Then the 2019 schedule was released — Week 15, December 15, Pittsburgh would host … Buffalo.

Three brothers. In the NFL. In the same game.

Trey, Terrell and Tremaine all remained healthy leading up to the contest, and it was actually flexed to primetime because of the playoff implications. The Bills were in the midst of their best season this century, and the Steelers were struggling without quarterback Ben Roethlisberger but had battled back into playoff contention.

All that meant little to Ferrell and Felicia and the dozens of family members and friends who joined them that frigid night at Heinz Field. After years of dreaming and thousands of workouts, they were focused on their boys sharing an NFL field.

“That night meant the world to us,” Trey, a 25-year-old running back, recently recalled from Pittsburgh. “Sometimes I ask myself, ‘Did it mean more to us or did it mean more to our parents?’ Just seeing the smiles on their faces, and just seeing them overfilled with joy and just lit up, I would trade everything I have to see moments like that.”

“Having the opportunity to do it on the biggest level, it was amazing,” Terrell, a 23-year-old safety, said moments before Trey. “It was a blessing in all forms … It was a night I’ll always remember simply because it’s something that you talk about when you’re younger but you never know if it’ll ever happen. And then it happened that one night.”

“Man, it was just a dream,” Tremaine, a 22-year-old linebacker, said from Buffalo. “I mean, we would be dreaming as children, but when it was actually here it was like, ‘Man, this is really true.’ So I kind of had to calm those emotions down going into the game.”

Buffalo won, 17-10, and went on to secure double-digit wins for the first time since 1999. The loss sparked a three-game losing streak that ended Pittsburgh’s season. But on that night, a pipe dream became reality. It marked just the second time in NFL history (the first was in 1927) that three brothers played in the same game.

“Man, [the three of us playing in the same game] was just a dream. I mean, we would be dreaming as children, but when it was actually here it was like, ‘Man, this is really true.'” — Bills LB Tremaine Edmunds

Even if the boys didn’t show athleticism as youths, it would have been tough for them to avoid sports. Ferrell was a third-round draft pick for the Dolphins out of Maryland in 1988, playing five seasons as a tight end in Miami, earning two Pro Bowl trips (1989, ‘90) before two final seasons in Seattle. He then got into coaching, eventually becoming the head coach at Dan River High, where he coached all three boys.

Felicia, meanwhile, was a star hurdler at Southern Illinois, winning three Missouri Valley Conference championships after a state title in high school. She eventually ventured into teaching, and is now a P.E. teacher at Johnson Elementary in Danville.

Yet, as involved with athletics as the Edmunds family was, they also served in the church. Along with cousins, aunts and uncles, they faithfully attended Right Touch Christian Church in Danville.

“We did pretty much everything in the church growing up, and that was just our foundation, because at the end of the day our parents always made sure that we realized we couldn’t do anything on the field, in the classroom, or just enjoy the fellowship of family without God,” Terrell says.

Faith in Christ was often talked about in the house, it remains a frequent topic on family text chains, and all three are participants in chapel services with their respective NFL teams. Faith was also a driving force in launching the 3 Eboyz Foundation. The brothers “believe that through Christ, all things are possible,” according to their website (which is currently undergoing a re-launch). “With a focus on Faith, Family, and Football, the brothers are active role models for young people in the world of sport and beyond by promoting positivity, faith, resilience and hard work.”

Those qualities were certainly tested on their journeys to the NFL. Though each brother was recruited by numerous Division I schools, and each chose to play for Virginia Tech, a perennially strong ACC program, none were surefire NFL prospects. Rivals, a leading recruiting service, ranked Trey as Virginia’s No. 9 prospect coming out of high school; Terrell was listed No. 30 when he came out, and Tremaine at No. 12.

But through growth as players and men at Virginia Tech, Terrell and Tremaine developed into first-round picks. Trey’s journey featured a few more obstacles, but was an inspiration to his little brothers.

“We did pretty much everything in the church growing up, and that was just our foundation, because at the end of the day our parents always made sure that we realized we couldn’t do anything on the field, in the classroom, or just enjoy the fellowship of family without God.” — Steelers S Terrell Edmunds

Trey starred at running back and linebacker for Dan River High, where he also scored more than 1,000 career points for the basketball team and won a 200-meter state title in track. After a redshirt season at Virginia Tech, he led the Hokies in 2013 with 830 yards all-purpose yards and 12 touchdowns in 13 games. But in the final week that season, he broke his left tibia. He battled more injuries the next two seasons, then transferred to Maryland, and again battled injuries.

But he never quit. In his toughest moments, he turned to God.

“Everything that I ever knew was basically stripped away from me,” Trey says. “I was basically helpless; I couldn’t do anything on my own. For so long it was me thinking that I was doing all of this and I had gotten myself to different situations and certain points in my life …

It was in college that Trey truly discovered — as did his brothers; as do many people — that he needed to make his own decision to follow Christ. He couldn’t rely on the faith of his parents. Trey was guided in that process by two different chaplains at Virginia Tech, as well as another one he spent time with after transferring to Maryland.

He now says his favorite verse is 1 Timothy 4:12: “Let no one despise your youth, but be an example to the believers in word, in conduct, in love, in spirit, in faith, in purity” (NKJV).

In battling injuries through college and fighting to keep a spot in the NFL, Trey has been an example to his brothers.

“A guy that’s determined to reach a certain point and that’s just a true testament to him, and his story just impacted me a lot,” Tremaine says of his oldest brother. “ Just seeing someone that’s focused like he is and has faith like he has, because he went through a lot. … Obviously he was frustrated (with the injuries), but at the same time he found a way. And that’s what it is at the end of the day, whether he’s dependent on his family, dependent on faith, dependent on a lot of things, he’s found a way to overcome those things, and I take my hat off to that.”