MAGAZINE: U.S. Softball Legend Cat Osterman is Back in the Game with Purpose 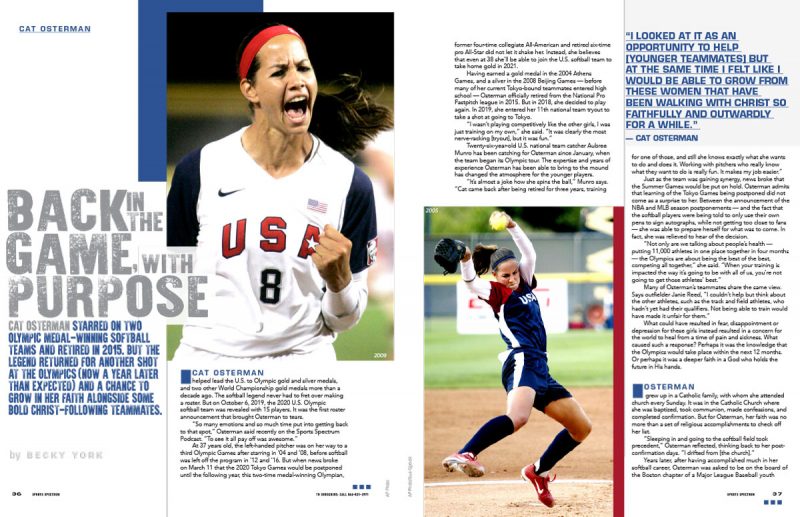 CAT OSTERMAN STARRED ON TWO OLYMPIC MEDAL-WINNING SOFTBALL TEAMS AND RETIRED IN 2015. BUT THE LEGEND RETURNED FOR ANOTHER SHOT AT THE OLYMPICS (NOW A YEAR LATER THAN EXPECTED) AND A CHANCE TO GROW IN HER FAITH ALONGSIDE SOME BOLD CHRIST-FOLLOWING TEAMMATES.

Cat Osterman helped lead the U.S. to Olympic gold and silver medals, and two other World Championship gold medals more than a decade ago. The softball legend never had to fret over making a roster. But on October 6, 2019, the 2020 U.S. Olympic softball team was revealed with 15 players. It was the first roster announcement that brought Osterman to tears.

“So many emotions and so much time put into getting back to that spot,” Osterman said recently on the Sports Spectrum Podcast. “To see it all pay off was awesome.”

At 37 years old, the left-handed pitcher was on her way to a third Olympic Games after starring in ‘04 and ‘08, before softball was left off the program in ‘12 and ‘16. But when news broke on March 11 that the 2020 Tokyo Games would be postponed until the following year, this two-time medal-winning Olympian, former four-time collegiate All-American and retired six-time pro All-Star did not let it shake her. Instead, she believes that even at 38 she’ll be able to join the U.S. softball team to take home gold in 2021.

Having earned a gold medal in the 2004 Athens Games, and a silver in the 2008 Beijing Games — before many of her current Tokyo-bound teammates entered high school — Osterman officially retired from the National Pro Fastpitch league in 2015. But in 2018, she decided to play again. In 2019, she entered her 11th national team tryout to take a shot at going to Tokyo.

“I wasn’t playing competitively like the other girls, I was just training on my own,” she said. “It was clearly the most nerve-racking [tryout], but it was fun.”

Twenty-six-year-old U.S. national team catcher Aubree Munro has been catching for Osterman since January, when the team began its Olympic tour. The expertise and years of experience Osterman has been able to bring to the mound has changed the atmosphere for the younger players.

“It’s almost a joke how she spins the ball,” Munro says. “Cat came back after being retired for three years, training for one of those, and still she knows exactly what she wants to do and does it. Working with pitchers who really know what they want to do is really fun. It makes my job easier.”

Just as the team was gaining synergy, news broke that the Summer Games would be put on hold. Osterman admits that learning of the Tokyo Games being postponed did not come as a surprise to her. Between the announcement of the NBA and MLB season postponements — and the fact that the softball players were being told to only use their own pens to sign autographs, while not getting too close to fans — she was able to prepare herself for what was to come. In fact, she was relieved to hear of the decision.

“Not only are we talking about people’s health — putting 11,000 athletes in one place together in four months — the Olympics are about being the best of the best, competing all together,” she said. “When your training is impacted the way it’s going to be with all of us, you’re not going to get those athletes’ best.”

Many of Osterman’s teammates share the same view. Says outfielder Janie Reed, “I couldn’t help but think about the other athletes, such as the track and field athletes, who hadn’t yet had their qualifiers. Not being able to train would have made it unfair for them.”

What could have resulted in fear, disappointment or depression for these girls instead resulted in a concern for the world to heal from a time of pain and sickness. What caused such a response? Perhaps it was the knowledge that the Olympics would take place within the next 12 months. Or perhaps it was a deeper faith in a God who holds the future in His hands.

“I looked at it as an opportunity to help [younger teammates] but at the same time I felt like I would be able to grow from these women that have been walking with Christ so faithfully and outwardly for a while.” — Cat Osterman

Osterman grew up in a Catholic family, with whom she attended church every Sunday. It was in the Catholic Church where she was baptized, took communion, made confessions and completed confirmation. But for Osterman, her faith was no more than a set of religious accomplishments to check off her list.

“Sleeping in and going to the softball field took precedent,” Osterman reflected, thinking back to her post-confirmation days. “I drifted from [the church].”

Years later, after having accomplished much in her softball career, Osterman was asked to be on the board of the Austin chapter of a Major League Baseball youth outreach program called Reviving Baseball & Softball in Inner Cities (RBI).

“I was so excited about it,” she said. “Yeah! Let’s help underprivileged girls play this sport.”

Each RBI chapter has a specific focus to help support sports in their area. RBI Austin’s happened to be faith-based mentoring. When Osterman discovered this, she was faced with a dilemma.

“I was still gung-ho about doing this, but in my heart I asked, ‘How am I associated with this faith-based organization when I’m not in my own faith?’” she said.

Her fellow RBI Austin members invited her to go to church with them, but she admitted to putting it off. When a few friends, whom she’d known for years through her University of Texas connections, encouraged her to attend church all by herself, she decided to give it a try.

“I swallowed my pride and went,” she said. “I’m pretty sure I cried the entire service.”

“Slowly but surely, I got myself in a place where I wanted to explore my faith more,” she said. “I think I drifted from it in the first place because I didn’t latch onto how to have a relationship [with Jesus Christ]. I know the ‘Our Father’ and the ‘Hail Mary,’ but I didn’t have a relationship.”

Not long after that, Osterman met her future husband and began attending church with him. Right away, the women’s pastor recognized Osterman and approached her.

“I’ve read the Bible through with her twice now,” Osterman said about her mentor. “We talk about it every day, and now I share that with other people.” 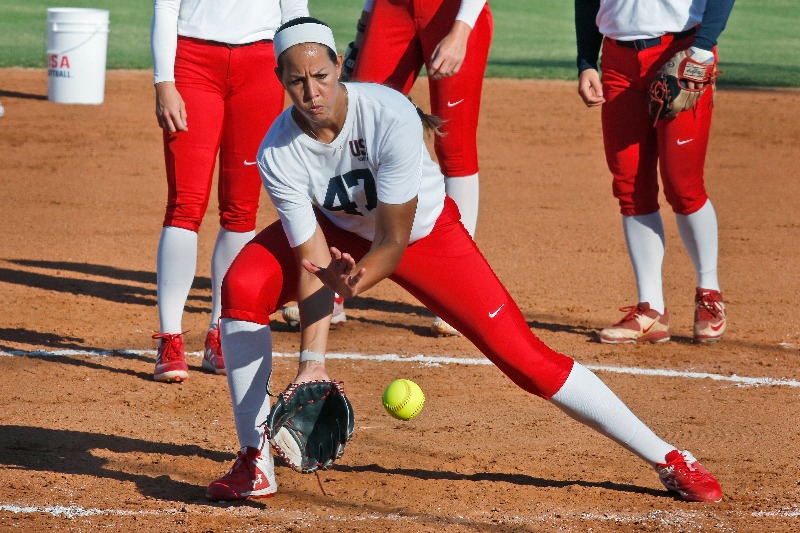 Osterman is not afraid to be vocal about her faith on social media or with fans, though there was a time she kept it to herself.

“I don’t know why at 37 I finally feel like I’m in a strong place in my faith,” she said. “I wish it had happened sooner, but at the same time, right now, there are so many parents that are like, ‘I love that you share Bible verses. I’m showing my daughter how to be a strong athlete, a good role model, and be Christiain.’ If that’s what it takes, that’s what it takes. … But there’s a small something missing from the beginning of my career … my relationship with the Lord.

“At 25 years old, I was just a softball player. I didn’t embrace the role model identity too much. I didn’t embrace a whole lot besides playing softball. Slowly over time, you add ‘coach’ in there when I started coaching. I get married and you can add ‘wife’ and ‘step mom.’ The most important thing now … I want to be known as a Christian.”

A few years ago when Osterman started to venture into a bold faith, sharing Bible verses on her social media platforms, she received a negative message from one of her followers.

“‘I love you and I love following you, but you’re just getting too faithy for me,’ he said. And I had only posted one or two religious things!” she remembered. “Then I realized, I don’t care who I’m offending. If my faith is offending you, obviously I’m not meant to be an influence in your life.”

Christian fellowship and a deeper relationship with the Lord was, in fact, one of the main reasons for Osterman’s decision to try out for the 2020 Olympic team…