By Jon Ackerman May 28, 2020
Micah Christenson (Photo courtesy of FIVB) 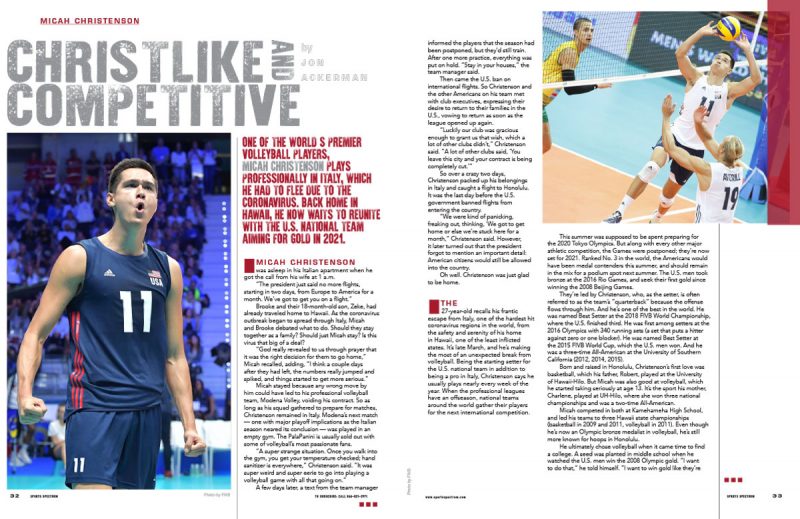 ONE OF THE WORLD’S PREMIER VOLLEYBALL PLAYERS, MICAH CHRISTENSON PLAYS PROFESSIONALLY IN ITALY, WHICH HE HAD TO FLEE DUE TO THE CORONAVIRUS. BACK HOME IN HAWAII, HE NOW WAITS TO REUNITE WITH THE U.S. NATIONAL TEAM AIMING FOR GOLD IN 2021.

Micah Christenson was asleep in his Italian apartment when he got the call from his wife at 1 a.m.

“The president just said no more flights, starting in two days, from Europe to America for a month. We’ve got to get you on a flight.”

Brooke and their 18-month-old son, Zeke, had already traveled home to Hawaii. As the coronavirus outbreak began to spread through Italy, Micah and Brooke debated what to do. Should they stay together as a family? Should just Micah stay? Is this virus that big of a deal?

“God really revealed to us through prayer that it was the right decision for them to go home,” Micah recalled, adding, “I think a couple days after they had left, the numbers really jumped and spiked, and things started to get more serious.”

Micah stayed because any wrong move by him could have led to his professional volleyball team, Modena Volley, voiding his contract. So as long as his squad gathered to prepare for matches, Christenson remained in Italy. Modena’s next match — one with major playoff implications as the Italian season neared its conclusion — was played in an empty gym. The PalaPanini is usually sold out with some of volleyball’s most passionate fans.

“A super strange situation. Once you walk into the gym, you get your temperature checked; hand sanitizer is everywhere,” Christenson said. “It was super weird and super eerie to go into playing a volleyball game with all that going on.”

A few days later, a text from the team manager informed the players that the season had been postponed, but they’d still train. After one more practice, everything was put on hold. “Stay in your houses,” the team manager said.

Then came the U.S. ban on international flights. So Christenson and the other Americans on his team met with club executives, expressing their desire to return to their families in the U.S., vowing to return as soon as the league opened up again.

So over a crazy two days, Christenson packed up his belongings in Italy and caught a flight to Honolulu. It was the last day before the U.S. government banned flights from entering the country.

“We were kind of panicking, freaking out, thinking, ‘We got to get home or else we’re stuck here for a month,” Christenson said. However, it later turned out that the president forgot to mention an important detail: American citizens would still be allowed into the country.

Oh well. Christenson was just glad to be home.

“It’s easy to be with God when you’re doing things well, but to go through the mud with God a little bit was a great experience for me to have. … It’s like, ‘OK God, this is still hard, I haven’t conquered this mountain yet, but I trust You.'” — Micah Christenson

The 27-year-old recalls his frantic escape from Italy, one of the hardest hit coronavirus regions in the world, from the safety and serenity of his home in Hawaii, one of the least inflicted states. It’s late March, and he’s making the most of an unexpected break from volleyball. Being the starting setter for the U.S. national team in addition to being a pro in Italy, Christenson says he usually plays nearly every week of the year. When the professional leagues have an offseason, national teams around the world gather their players for the next international competition.

This summer was supposed to be spent preparing for the 2020 Tokyo Olympics. But along with every other major athletic competition, the Games were postponed; they’re now set for 2021. Ranked No. 3 in the world, the Americans would have been medal contenders this summer, and should remain in the mix for a podium spot next summer. The U.S. men took bronze at the 2016 Rio Games, and seek their first gold since winning the 2008 Beijing Games.

Born and raised in Honolulu, Christenson’s first love was basketball, which his father, Robert, played at the University of Hawaii-Hilo. But Micah was also good at volleyball, which he started taking seriously at age 13. It’s the sport his mother, Charlene, played at UH-Hilo, where she won three national championships and was a two-time All-American.

Micah competed in both at Kamehameha High School, and led his teams to three Hawaii state championships (basketball in 2009 and 2011, volleyball in 2011). Even though he’s now an Olympic bronze medalist in volleyball, he’s still more known for hoops in Honolulu.

He ultimately chose volleyball when it came time to find a college. A seed was planted in middle school when he watched the U.S. men win the 2008 Olympic gold. “I want to do that,” he told himself. “I want to win gold like they’re doing.” After being highly recruited for both sports, it came down to going to a “pretty good” college for basketball, or essentially any school he wanted for volleyball. He chose USC.

It was in college that Christenson really grew in his faith. He was raised in a Christian household by parents who gave him the middle name of Makanamaikjalani, which means “Gift from Heaven.” They had trouble conceiving, and then Charlene needed an abdominal surgery while in her third trimester with Micah in the womb. He was very exposed during the operation.

“I was basically trying to get out of her stomach way too early,” he said. “So I had a high possibility of dying, and so for me to continue to be alive, basically, and be born, was their little gift from Heaven.”

Robert and Charlene have demonstrated the love, compassion and forgiveness of Christ as long as Micah can remember, and they regularly brought Micah and his sister, Joanna, to church and Sunday school. Robert also worked with the sports ministry Athletes in Action and served as the basketball chaplain at the University of Hawaii.

But at USC, Micah was on his own to decide whether he’d attend church or campus ministry events.

When he felt a pull to go to Athletes in Action meetings and attend church, it confirmed a desire for a personal relationship with the Lord.

“That was a super liberating thing for me and really strengthened and affirmed my relationship with God, because it was my decision,” he says. “It was completely and wholeheartedly my decision, and that was a really cool thing for me.” 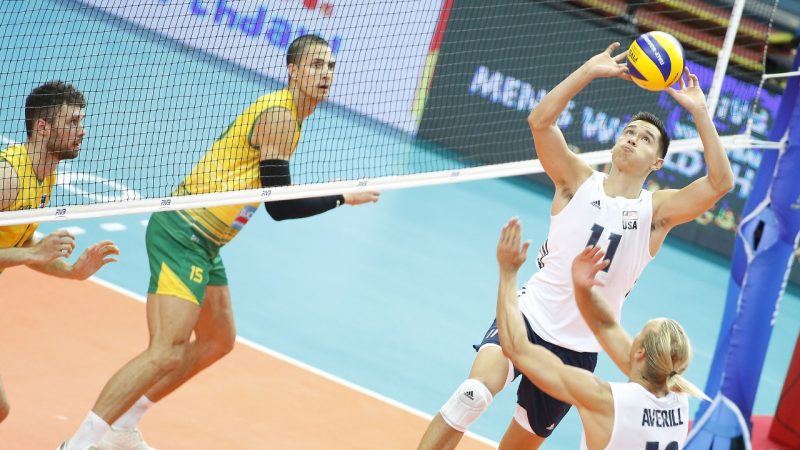 While excelling at USC, Christenson also competed with the national team, starring in major international tournaments before even graduating. Just months after receiving his diploma, he helped the team qualify for the 2016 Olympics by winning the 2015 FIVB World Cup.

But Christenson soon learned the reality of life as a professional volleyball player when he signed with Modena Volley and moved to Italy. He didn’t know the language, or the town, or anyone on the team, but was expected to be a leader as the setter. And he quickly learned how important it is to win, as you could soon be out of a job if the team didn’t.

“I spent a lot of time sitting at home reading the Bible,” he says of that first pro season.

He FaceTimed often with his parents and Brooke, his fiancée at the time, whom he met through volleyball and AIA at USC (they married in 2016, after the Olympics and before his second season in Italy). Being away from them was tough.

“But I think that year really helped me learn about who I am as well … and that helped forge a lot of my relationship with God, in terms of going through the mud with God,” he says, adding, “It’s easy to be with God when you’re doing things well, but to go through the mud with God a little bit was a great experience for me to have. … It’s like, ‘OK God, this is still hard, I haven’t conquered this mountain yet, but I trust You. And I’m still here with You.’”

Toward the end of that first season, in an attempt to strengthen its roster for the playoffs, Modena signed Reid Priddy, a longtime veteran of the U.S. national team. Priddy was coming off an ACL tear and sought out Modena for the chance to play with Christenson, because synching up with his national team’s setter could only help his chances of making the 2016 Olympic team roster.

Christenson obviously welcomed the acquisition because it brought him a friend. In hanging out with Priddy and his family the last few months of Modena’s season, Christenson learned more about how to be a pro…