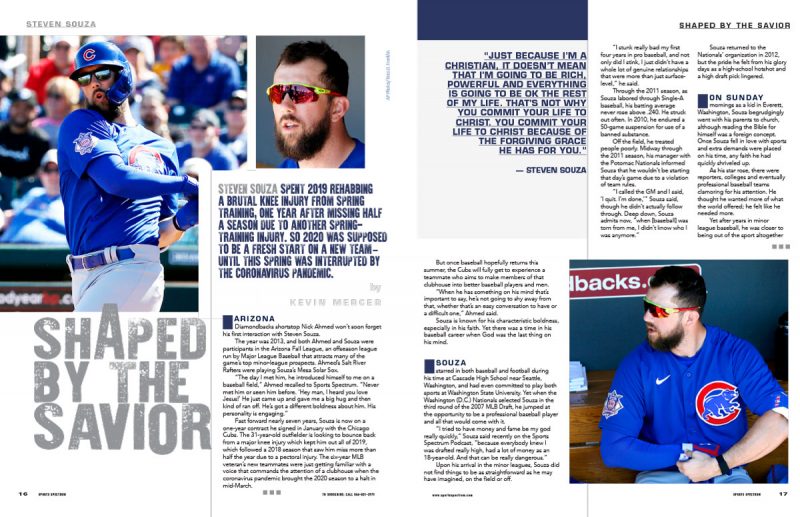 STEVEN SOUZA SPENT 2019 REHABBING A BRUTAL KNEE INJURY FROM SPRING TRAINING, ONE YEAR AFTER MISSING HALF A SEASON DUE TO ANOTHER SPRING-TRAINING INJURY. SO 2020 WAS SUPPOSED TO BE A FRESH START ON A NEW TEAM — UNTIL THIS SPRING WAS INTERRUPTED BY THE CORONAVIRUS PANDEMIC.

The year was 2013, and both Ahmed and Souza were participants in the Arizona Fall League, an offseason league run by Major League Baseball that attracts many of the game’s top minor-league prospects. Ahmed’s Salt River Rafters were playing Souza’s Mesa Solar Sox.

“The day I met him, he introduced himself to me on a baseball field,” Ahmed recalled to Sports Spectrum. “Never met him or seen him before. ‘Hey man, I heard you love Jesus!’ He just came up and gave me a big hug and then kind of ran off. He’s got a different boldness about him. His personality is engaging.”

Fast forward nearly seven years, Souza is now on a one-year contract he signed in January with the Chicago Cubs. The 31-year-old outfielder is looking to bounce back from a major knee injury which kept him out all of 2019, which followed a 2018 season that saw him miss more than half the year due to a pectoral injury. The six-year MLB veteran’s new teammates were just getting familiar with a voice that commands the attention of a clubhouse when the coronavirus pandemic brought the 2020 season to a halt in mid-March.

But once baseball hopefully returns this summer, the Cubs will fully get to experience a teammate who aims to make members of that clubhouse into better baseball players and men.

“When he has something on his mind that’s important to say, he’s not going to shy away from that, whether that’s an easy conversation to have or a difficult one,” Ahmed said.

Souza is known for his characteristic boldness, especially in his faith. Yet there was a time in his baseball career when God was the last thing on his mind.

Souza starred in both baseball and football during his time at Cascade High School near Seattle, Washington, and had even committed to play both sports at Washington State University. Yet when the Washington (D.C.) Nationals selected Souza in the third round of the 2007 MLB Draft, he jumped at the opportunity to be a professional baseball player and all that would come with it.

“I tried to have money and fame be my god really quickly,” Souza said recently on the Sports Spectrum Podcast, “because everybody knew I was drafted really high, had a lot of money as an 18-year-old. And that can be really dangerous.”

Upon his arrival in the minor leagues, Souza did not find things to be as straightforward as he may have imagined, on the field or off.

“I stunk really bad my first four years in pro baseball, and not only did I stink, I just didn’t have a whole lot of genuine relationships that were more than just surface-level,” he said.

Through the 2011 season, as Souza labored through Single-A baseball, his batting average never rose above .240. He struck out often. In 2010, he endured a 50-game suspension for use of a banned substance.

Off the field, he treated people poorly. Midway through the 2011 season, his manager with the Potomac Nationals informed Souza that he wouldn’t be starting that day’s game due to a violation of team rules.

“I called the GM and I said, ‘I quit. I’m done,’” Souza said, though he didn’t actually follow through. Deep down, Souza admits now, “when [baseball] was torn from me, I didn’t know who I was anymore.”

Souza returned to the Nationals’ organization in 2012, but the pride he felt from his glory days as a high-school hotshot and a high draft pick lingered.

On Sunday mornings as a kid in Everett, Washington, Souza begrudgingly went with his parents to church, although reading the Bible for himself was a foreign concept. Once Souza fell in love with sports and extra demands were placed on his time, any faith he had quickly shriveled up.

As his star rose, there were reporters, colleges and eventually professional baseball teams clamoring for his attention. He thought he wanted more of what the world offered; he felt like he needed more.

Yet after years in minor league baseball, he was closer to being out of the sport altogether than he was to reaching the majors. The life he thought he was supposed to be living — the one he was sure would give him fulfillment — had done little to satisfy.

It was through a conversation at the wedding of one of his friends that God began to reveal to Souza that true and lasting satisfaction only comes through a relationship with Christ. With his interest piqued, Souza turned to the Bible for the first time to learn more about Jesus. The words he saw there, he said, spoke to his heart. He found himself encountering God on each page and in each prayer, and by God’s grace he came to believe and get baptized.

“I knew [my baptism] was something that I could proclaim that I’m headed in a different direction,” Souza said. “Like, I’m moving away from the world and I’m moving towards Jesus and I want everybody to know so they can hold me accountable. I did that and my life was just radically changed.”

Souza was a new man in Christ. As the lure of his past lifestyle melted away, he resolved to build a baseball career that didn’t end in the minor leagues. 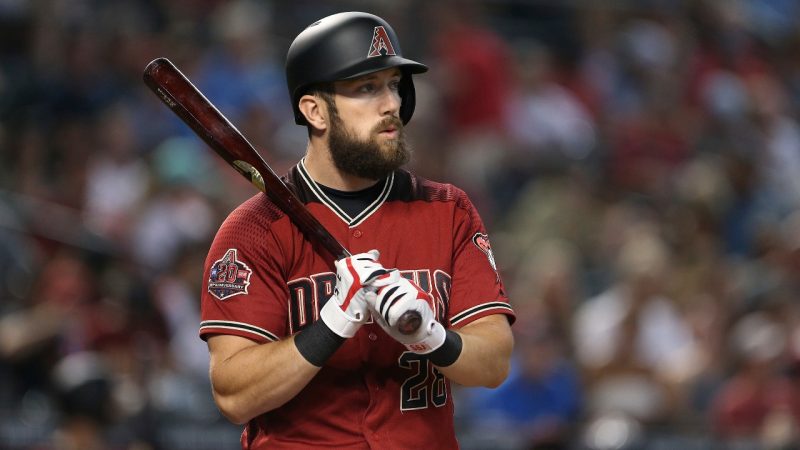 Steven Souza with the Arizona Diamondbacks in 2018. (AP Photo/Ralph Freso)

Souza’s renewed focus and determination on the field resulted in a few consecutive good seasons and he climbed the minor-league ladder. Finally, in April 2014, Souza made his long-awaited major-league debut with the Washington Nationals. He played 21 MLB games that year and recorded three hits (two of which were home runs).

Souza landed with the Tampa Bay Rays after a three-team trade in December 2014, and it was there that Souza would establish himself as an everyday MLB right fielder. The Tampa teams he was on never made the playoffs, but Souza was able to showcase his hitting prowess; he belted 63 home runs during his three years there. His best statistical season in the majors was 2017, when he collected 125 hits, 30 home runs and 78 RBIs.

Souza was traded to the Arizona Diamondbacks in February 2018, reuniting him with an old friend from the Arizona Fall League — Nick Ahmed. Souza was hopeful to bring his burgeoning game to his new team, but spring training did not go as hoped.

He strained his right pectoral muscle that March, causing him to miss the first 30 games of the season. He re-aggravated it in late May, and the injury lingered throughout the season as Souza appeared in only 72 games. His batting average dipped to .220 and he managed only 53 hits and five home runs.

Injury struck again the following spring, this time when Souza stepped and slipped on home plate in the second-to-last exhibition game, just three days before the regular season was to begin.

“What felt like an eternity sliding across home plate with my leg happened in just seconds and it changed the trajectory of my career,” he said. “It was hard. It was really hard at first. I think probably those first two weeks after were really difficult for me.”

Souza had torn a number of ligaments in his left knee, including his ACL. His 2019 season was over before it began…