This story appears in the Spring 2021 issue of Sports Spectrum Magazine. To read the rest of it, and for more in-depth feature stories like it, subscribe to our quarterly magazine for only $18. 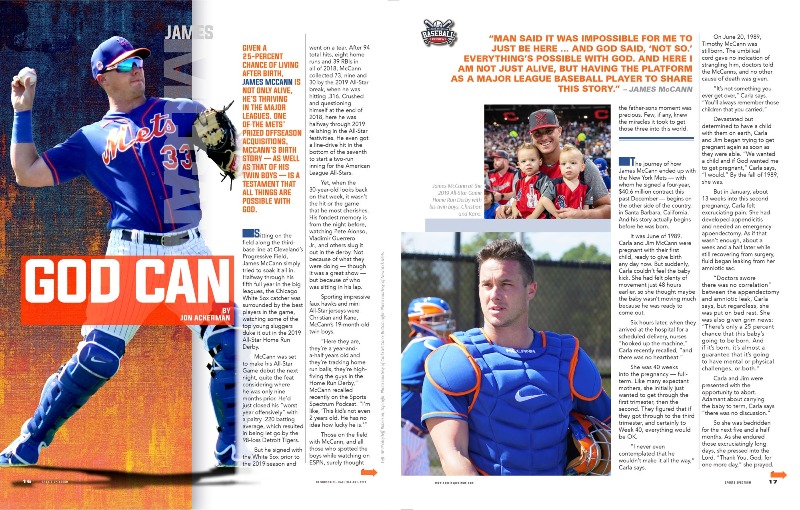 Given a 25-percent chance of living after birth, James McCann is not only alive, he’s thriving in the major leagues. One of the Mets’ prized offseason acquisitions, McCann’s birth story — as well as that of his twin boys — is a testament that all things are possible with God.

Sitting on the field along the third-base line at Cleveland’s Progressive Field, James McCann simply tried to soak it all in. Halfway through his fifth full year in the big leagues, the Chicago White Sox catcher was surrounded by the best players in the game, watching some of the top young sluggers duke it out in the 2019 All-Star Home Run Derby.

McCann was set to make his All-Star Game debut the next night, quite the feat considering where he was only nine months prior. He’d just closed his “worst year offensively” with a paltry .220 batting average, which resulted in being let go by the 98-loss Detroit Tigers.

But he signed with the White Sox prior to the 2019 season and went on a tear. After 94 total hits, eight home runs and 39 RBIs in all of 2018, McCann collected 73, nine and 30 by the 2019 All-Star break, when he was hitting .316. Crushed and questioning himself at the end of 2018, here he was halfway through 2019 relishing in the All-Star festivities. He even got a line-drive hit in the bottom of the seventh to start a two-run inning for the American League All-Stars.

Yet, when the 30-year-old looks back on that week, it wasn’t the hit or the game that he most cherishes. His fondest memory is from the night before, watching Pete Alonso, Vladimir Guerrero Jr., and others slug it out in the derby. Not because of what they were doing — though it was a great show — but because of who was sitting in his lap.

“Here they are, they’re a year-and-a-half years old and they’re tracking home run balls, they’re high-fiving the guys in the Home Run Derby,” McCann recalled recently on the Sports Spectrum Podcast. “I’m like, ‘This kid’s not even 2 years old. He has no idea how lucky he is.’”

Those on the field with McCann, and all those who spotted the boys while watching on ESPN, surely thought the father-sons moment was precious. Few, if any, knew the miracles it took to get those three into this world. 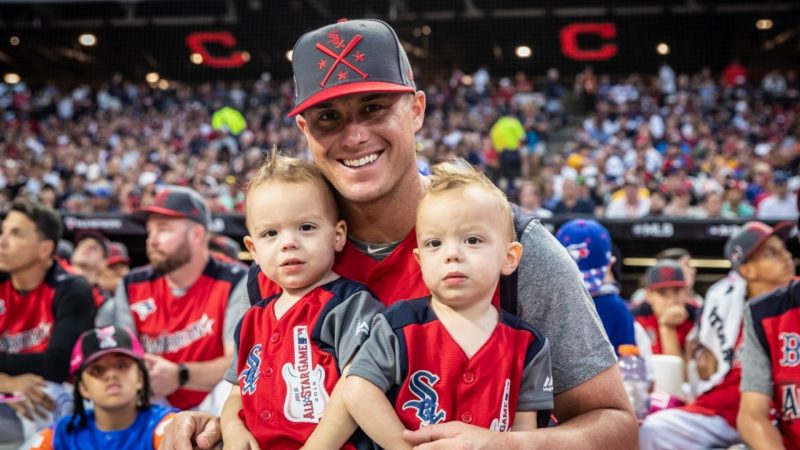 The journey of how James McCann ended up with the New York Mets — with whom he signed a four-year, $40.6 million contract this past December — begins on the other side of the country, in Santa Barbara, California. And his story actually begins before he was born.

It was June of 1989. Carla and Jim McCann were pregnant with their first child, ready to give birth any day now. But suddenly, Carla couldn’t feel the baby kick. She had felt plenty of movement just 48 hours earlier, so she thought maybe the baby wasn’t moving much because he was ready to come out.

Six hours later, when they arrived at the hospital for a scheduled delivery, nurses “hooked up the machine,” Carla recently recalled, “and there was no heartbeat.”

She was 40 weeks into the pregnancy — full-term. Like many expectant mothers, she initially just wanted to get through the first trimester, then the second. They figured that if they got through to the third trimester, and certainly to Week 40, everything would be OK.

“I never even contemplated that he wouldn’t make it all the way,” Carla says.

On June 20, 1989, Timothy McCann was stillborn. The umbilical cord gave no indication of strangling him, doctors told the McCanns, and no other cause of death was given.

“It’s not something you ever get over,” Carla says. “You’ll always remember those children that you carried.”

Devastated but determined to have a child with them on earth, Carla and Jim began trying to get pregnant again as soon as they were able. “We wanted a child and if God wanted me to get pregnant,” Carla says, “I would.” By the fall of 1989, she was.

But in January, about 13 weeks into this second pregnancy, Carla felt excruciating pain. She had developed appendicitis and needed an emergency appendectomy. As if that wasn’t enough, about a week and a half later while still recovering from surgery, fluid began leaking from her amniotic sac.

“Doctors swore there was no correlation” between the appendectomy and amniotic leak, Carla says, but regardless, she was put on bed rest. She was also given grim news: “There’s only a 25 percent chance that this baby’s going to be born. And if it’s born, it’s almost a guarantee that it’s going to have mental or physical challenges, or both.”

Carla and Jim were presented with the opportunity to abort. Adamant about carrying the baby to term, Carla says “there was no discussion.”

So she was bedridden for the next five and a half months. As she endured those excruciatingly long days, she pressed into the Lord. “Thank You, God, for one more day,” she prayed.

On June 13, 1990 — one week before his brother Timothy’s first birthday — James McCann was born. And not only was he alive, he was born without any mental or physical disabilities. Upon the doctor announcing, “It’s a beautiful, healthy baby boy,” Carla looked right at him and said, “Not bad for a one-in-four chance.”

“Man said it was impossible for me to just be here … and God said, ‘Not so.’ Everything’s possible with God. And here I am not just alive, but having the platform as a Major League Baseball player to share this story.” — James McCann

Carla and Jim like to joke that James was “born 40 years old.” He was their “teaser baby” in that he wasn’t a typical boy who climbs up and on everything in sight. Those wild acts were taken care of by Michael, the McCanns’ third son, who was born in March 1993 (without any complications).

“[James] was always the third parent for his younger brother,” Carla says. “He was very focused on what he wanted, and he recognized very early things that might distract him from his goals. He worked diligently in school, diligently in sports.”

He also grasped the magnitude of his birth story at an early age. Carla and Jim talked often about Timothy, as well as about Jesus and the role the Lord plays in their lives, so both James and Michael were well aware they had an older brother in Heaven. Knowing that and also understanding the odds against his own entrance into this world, James as a teenager connected with the concept of all people being on earth for a reason. That’s when he adopted Mark 10:27 as his life verse:

“Jesus looked at them and said, ‘With man this is impossible, but not with God; all things are possible with God.’”

“God has definitely been protecting me from Day 1,” says James, who now includes the scripture reference in all his autographs, “but that verse speaks to me so heavily because it says, ‘With man this is impossible.’ Well, man said it was impossible for me to just be here, and they definitely said it was impossible for me to be here without any physical or mental disabilities. And God said, ‘Not so.’ Everything’s possible with God. And here I am not just alive, but having the platform as a Major League Baseball player to share that story.”

When James and his wife, Jessica, became pregnant in 2017, little did they know that the story was about to add another trying chapter.

James and Jessica learned they were having twins that June. Shortly thereafter, they were told it would be a high-risk pregnancy. In Detroit at the time, Jessica began seeing doctors at University of Michigan Hospital, whom she grew comfortable with. But the McCanns sold their offseason house in Fayetteville, Arkansas (James’ college town), and bought a house in Nashville before Thanksgiving. So all her pre-natal care transferred to Vanderbilt Children’s Hospital. She went to an appointment on Dec. 5 — and was told she’d be having a caesarean delivery (C-section) the next day.

“We didn’t know who we were going to, what we were getting ourselves into,” James recalled about transferring to new doctors, “and then the next thing you know, the boys are born and we’re living in a hospital for seven weeks. As crazy as it was, we knew they were going to be born early; we didn’t know it was going to be 10 weeks early.”

Christian and Kane weighed about 3 pounds each, and thus were closely monitored in the neonatal intensive care unit as James and Jessica were mostly relegated to watching from behind the glass. At first, the parents could hold the babies once a day, later for an hour a day. Doctors made no promises of taking them home.

“When all the testing came back after they were born,” James says, “there’s a lot of stuff that was going on, but I want to say there’s 42, 43 known cases identical to ours. And of that number, over 25 of them resulted in at least one of the children not making it. So we’re really a statistic, and it’s crazy to think about.”

“Going back to my birth story and my testimony, my wife and I were at peace the whole time with it because we truly believed that it was God just adding to our story,” James says. “It was God adding another miracle to our story — two miracles. And here we are three years later and they’re healthy as can be and running around just like any crazy 3-year-old toddler boy should be.” 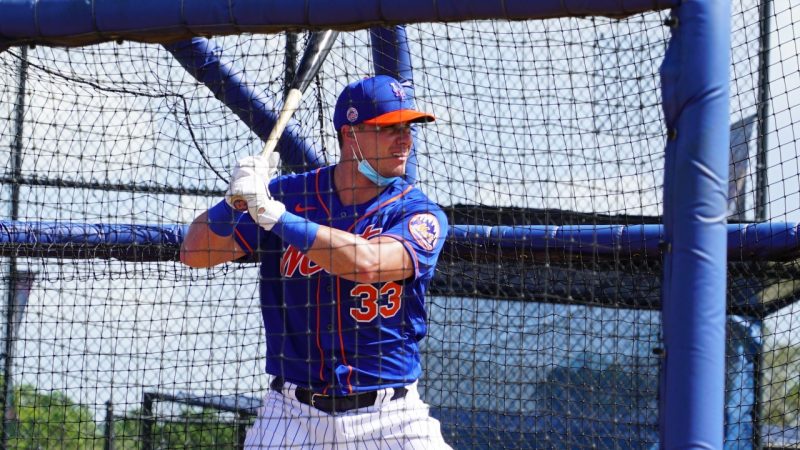 That whirlwind offseason may have contributed to James’ lackluster 2018 season — “my worst year offensively,” he says. It led to his release from the Tigers, who drafted him in the second round of the 2011 MLB Draft and groomed him for three years in the minors leading up to his MLB debut on Sept. 1, 2014. James admits to being hurt by the Tigers not offering him a contract after four full seasons in the majors, but he was soon able to see God’s provision…

This story appears in the Spring 2021 issue of Sports Spectrum Magazine. To read the rest of it, and for more in-depth feature stories like it, subscribe to our quarterly magazine for only $18.