This story appears in the Spring 2022 issue of Sports Spectrum Magazine. To read the rest of it, and for more in-depth feature stories like it, subscribe to our quarterly magazine for only $24. 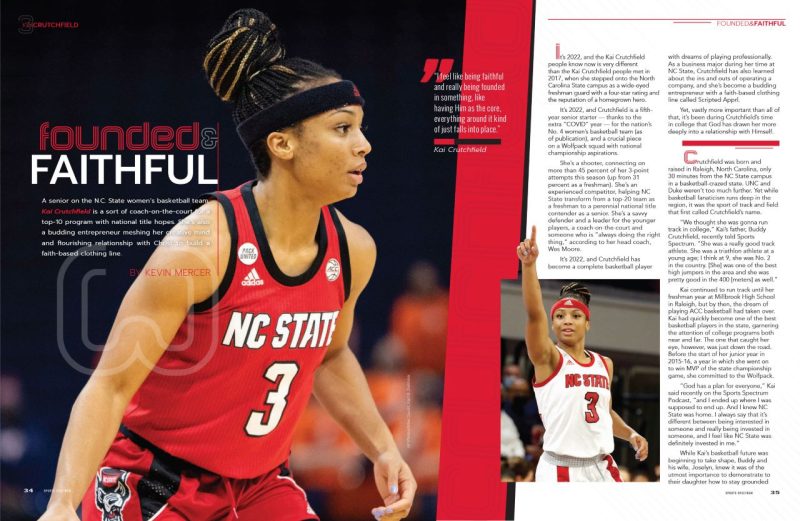 A senior on the NC State women’s basketball team, Kai Crutchfield is a sort of coach-on-the-court for a top-10 program with national title hopes. She’s also a budding entrepreneur meshing her creative mind and flourishing relationship with Christ to build a faith-based clothing line.

It’s 2022, and Crutchfield is a fifth-year senior starter — thanks to the extra “COVID” year — for the nation’s No. 4 women’s basketball team (as of publication), and a crucial piece on a Wolfpack squad with national championship aspirations.

She’s a shooter, connecting on more than 45 percent of her 3-point attempts this season (up from 31 percent as a freshman). She’s an experienced competitor, helping NC State transform from a top-20 team as a freshman to a perennial national title contender as a senior. She’s a savvy defender and a leader for the younger players, a coach-on-the-court and someone who is “always doing the right thing,” according to her head coach, Wes Moore.

It’s 2022, and Crutchfield has become a complete basketball player with dreams of playing professionally. As a business major during her time at NC State, Crutchfield has also learned about the ins and outs of operating a company, and she’s become a budding entrepreneur with a faith-based clothing line called Scripted Apprl.

Yet, vastly more important than all of that, it’s been during Crutchfield’s time in college that God has drawn her more deeply into a relationship with Himself.

Krutchfield was born and raised in Raleigh, North Carolina, only 30 minutes from the NC State campus in a basketball-crazed state. UNC and Duke weren’t too much further. Yet while basketball fanaticism runs deep in the region, it was the sport of track and field that first called Crutchfield’s name.

“We thought she was gonna run track in college,” Kai’s father, Buddy Crutchfield, recently told Sports Spectrum. “She was a really good track athlete. She was a triathlon athlete at a young age; I think at 9, she was No. 2 in the country. [She] was one of the best high jumpers in the area and she was pretty good in the 400 [meters] as well.”

Kai continued to run track until her freshman year at Millbrook High School in Raleigh, but by then, the dream of playing ACC basketball had taken over. Kai had quickly become one of the best basketball players in the state, garnering the attention of college programs both near and far. The one that caught her eye, however, was just down the road. Before the start of her junior year in 2015-16, a year in which she went on to win MVP of the state championship game, she committed to the Wolfpack.

While Kai’s basketball future was beginning to take shape, Buddy and his wife, Joselyn, knew it was of the utmost importance to demonstrate to their daughter how to stay grounded in the One who deserves all honor — Jesus Christ. Both Buddy and Joselyn are followers of Jesus, and they modeled prayer for Kai and her younger brother, Brandon. The couple constantly encouraged their children to pray on their own and often initiated family discussions about God and His grace. By her own admission, Kai “nibbled on [faith] a little bit” in high school, but when she arrived as a freshman at NC State in the fall of 2017, her relationship with Christ wasn’t fully her own.

Kai spent most of her freshman season mired on the Wolfpack bench, averaging two points and playing less than 10 minutes per game. In her sophomore season, suddenly she was plunged into the starting lineup for 20 games due to injuries. It was a period of immense uncertainty for Kai, but one in which she leaned on Christ like never before. She had to trust in Him to give her the strength to overcome the doubts and transform her into the player her teammates needed her to be.

“Being able to have that relationship with Him really got me through, just making sure I stay grounded,” Kai said. “Of course I was a little flustered, but you just ask God to cast away all your anxieties, and He makes a way.” 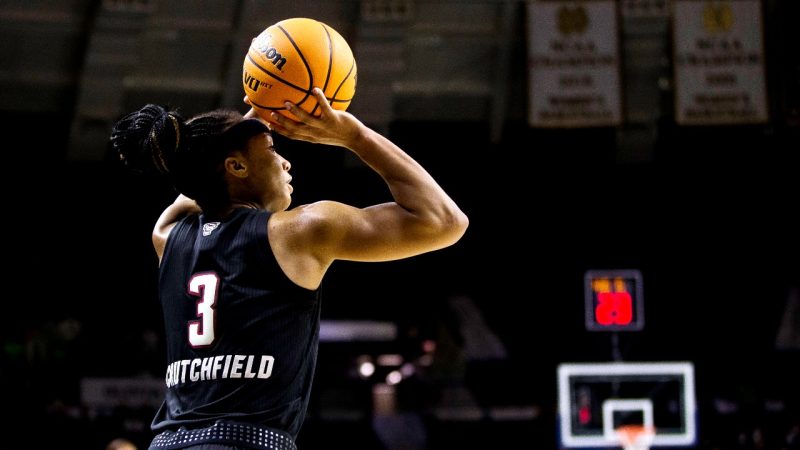 “Being able to have that relationship with Him really got me through, just making sure I stay grounded. Of course I was a little flustered, but you just ask God to cast away all your anxieties, and He makes a way.” — Kai Crutchfield

It was also around that time that her parents agreed to host a Wednesday night Bible study at their house. Kai — already a regular visitor back home — was eager to participate. The group soon ballooned to nearly 30 people.

“One of the things that I think that group, because of the diversity of it, that shook us was just the different walks of life, the different things that people are exposed to,” Joselyn told Sports Spectrum. “We had families that were from South Dakota and Washington state and then people from rural North Carolina. … It exposed Kai [to] what the world is like. And it also helps you to kind of center yourself and be more [grateful for] what you have.”

God was steadily at work in Kai’s heart, and Kai was studying God’s Word more deeply. She began to post more openly and boldly about her faith on social media. She regularly sought out sermons to listen to, and she joined the Fellowship of Christian Athletes at NC State. She even incorporated faith into her artistic creations.

In addition to her mandatory 20-minute nap before games, she also added to her pregame routine gospel music and a prayer for God to use her, and for the safety of all players, coaches and officials.

On the court, Kai was in the midst of her most productive year during the 2019-20 season. She was having a career-best year (28.6 minutes, 7.5 points and 3.6 rebounds per game), while her Wolfpack team was one of the best in the country. NC State seemed poised and ready for a title run.

Then the COVID-19 pandemic descended on the world and brought an abrupt end to the fairytale season.

Kai could have spent the quarantine wallowing at home, absorbed by the basketball glory that had eluded her. Instead, her creative mind meshed with her flourishing faith in Christ and, cultivated by her college business classes, resulted in what is now known as Scripted Apprl. Sitting at the kitchen table, watching a sermon with her parents and her brother, the pastor said, “Me plus God is greater than anything.” Almost immediately, Kai knew that phrase was the slogan she wanted to be at the heart of a faith-based apparel line.

Kai floated the idea of Scripted Apprl, and the whole family immediately jumped into action. Kai interviewed other local entrepreneurs while her family researched best practices for launching a business during a pandemic. Soon afterward came a website, scriptedapprl.com. Then Kai and Joselyn convinced Buddy to turn the family loft into Kai’s business workspace: “Scripted Headquarters” as they call it.

Scripted Apprl features multiple clothing options in all sorts of colors — everything from hoodies to T-shirts to wristbands — all with various faith-based messages. There are items for babies and kids, women and men.

“Having [Scripted Apprl] on, I feel like you can look down … and see it and it’s kind of just a reminder of, ‘He’s always with you,’” Kai said about her clothing options…

This story appears in the Spring 2022 issue of Sports Spectrum Magazine. To read the rest of it, and for more in-depth feature stories like it, subscribe to our quarterly magazine for only $24.