This story appears in the Fall 2022 issue of Sports Spectrum Magazine. To read the rest of it, and for more in-depth feature stories like it, subscribe to our quarterly magazine for only $24. 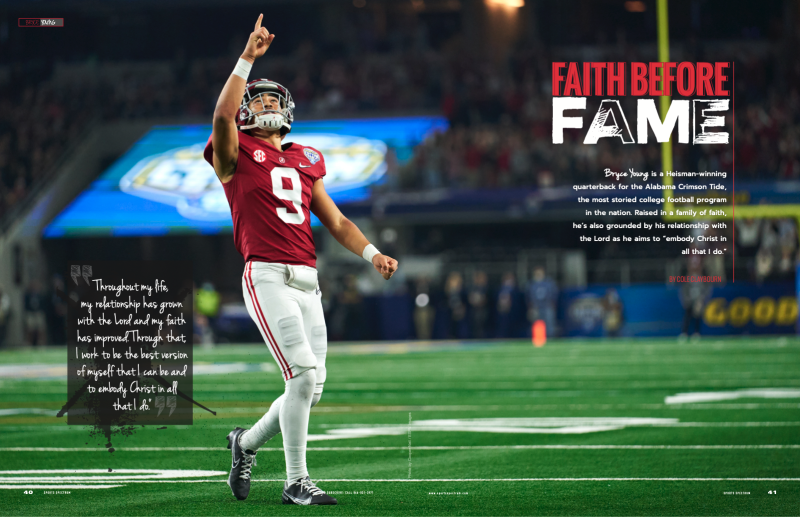 Bryce Young is a Heisman-winning quarterback for the Alabama Crimson Tide, the most storied college football program in the nation. Raised in a family of faith, he’s also grounded by his relationship with the Lord as he aims to “embody Christ in all that I do.”

It was a “massive game,” as Mater Dei head football coach Bruce Rollinson remembers it. A raucous crowd of nearly 10,000 people packed the stands at the Santa Ana, California, high school to see his No. 3-ranked Monarchs play host to the No. 1 team in the country, IMG Academy, a football powerhouse out of Bradenton, Florida. Plenty of Division I talent was on the field.

IMG kicked a field goal to take a 24-21 lead with 3:27 left to play, but Mater Dei was about to get the ball back. Undaunted, quarterback Bryce Young put on his helmet and made his way up the sideline.

“He jogged by, had a big smile on his face, and he goes, ‘We got this, Coach,’” Rollinson said. “It kind of calmed everybody down because this was his moment.”

Young, then a junior, went six-for-six on that drive, never fazed by the pressure. “All six plays, he’s keeping the ball alive,” Rollinson said. “Bryce just kept finding somebody open.”

Young capped off the drive with a game-winning 9-yard touchdown run on a read-option play. That drive is now cemented in Mater Dei football lore, shown ad nauseum in highlight videos and promotional material.

But Rollinson doesn’t tell that story to brag about the on-field exploits of Young, though there are plenty. There were of course a few chest bumps and high-fives with teammates, but the indelible moment after that score, Rollinson recalls, is Young stopping and pointing to Heaven.

“That’s him. He knows that confidence comes from his Savior,” Rollinson said. “That’s what he believes. I’ve talked to him about it and his faith is very deep. He doesn’t preach it, he permeates it. He exemplifies it.

“When I finally got to Bryce after he did that, I swear he looked at me and said, ‘I told you.’ I stopped and I said, ‘Wow, we’ve got somebody special.’”

It’s as if Young was built for these moments. He stepped into the starter’s role at Mater Dei after the departure of J.T. Daniels, the 2017 Gatorade National Player of the Year who went on to play at USC, Georgia and now West Virginia. The position was also once held by former USC star and Heisman Trophy winner Matt Leinart, as well as Matt Barkley, another former USC star QB who’s now in his seventh NFL season.

After that drive, though, Rollinson said it became the “Bryce Young Show” at Mater Dei.

It was a prequel to what hundreds of thousands more witnessed last fall when Young found himself in a similar situation, this time as the quarterback at Alabama. The stage was bigger, the stakes were higher.

The No. 3 Crimson Tide was facing in-state rival Auburn in a game that not only had Iron Bowl bragging rights on the line, but one ‘Bama needed to win to keep its College Football Playoff hopes alive. Auburn punted to Alabama and pinned it down at the 3-yard line with just 1:32 left to play and the Crimson Tide trailing, 10-3.

“I looked at my wife and I said, ‘He’s going to take them all the way down. Been there, done that,’” Rollinson said. “Sure enough, he did.”

Young completed a first-down pass on third and 10 from deep inside the Alabama end zone, then another one on fourth and 7 with 38 seconds left. The drive stalled before Young found Ja’Corey Brooks in the end zone on a third-and-10 pass with 24 seconds left to tie the game after the extra point. He did it all while one of his best receiving targets, eventual first-round pick Jameson Williams, was injured on the sideline.

Alabama went on to win, 24-22, in four overtimes, with Young delivering big play after big play when his team needed them, including the game-winning two-point conversion pass to eventual first-round pick John Metchie. It was Young’s Heisman moment.

As a sophomore last season, Young led Alabama to a 13-2 record, an SEC championship and a national runner-up finish. For his efforts, he was named the Heisman Trophy Award winner, given annually to college football’s top player.

That’s a lot of attention on a young man. There have been plenty others who, in Young’s shoes, might have basked in the fame and attention that comes with the cache of being the Heisman-winning quarterback at Alabama.

But Bryce Young is different, and he wants people to know why.

“Regardless of how someone else views me, whatever award, accolade, whatever someone may say — negative or positive — I appreciate and am grateful for the positive, and even for the negative,” Young said on the Sports Spectrum Podcast. “But at the end of the day, what motivates me and pushes me is to model myself after the Lord. I definitely have a lot of work to do. There’s a lot of things I want to improve on as a person, as a player, throughout all aspects of my life.” 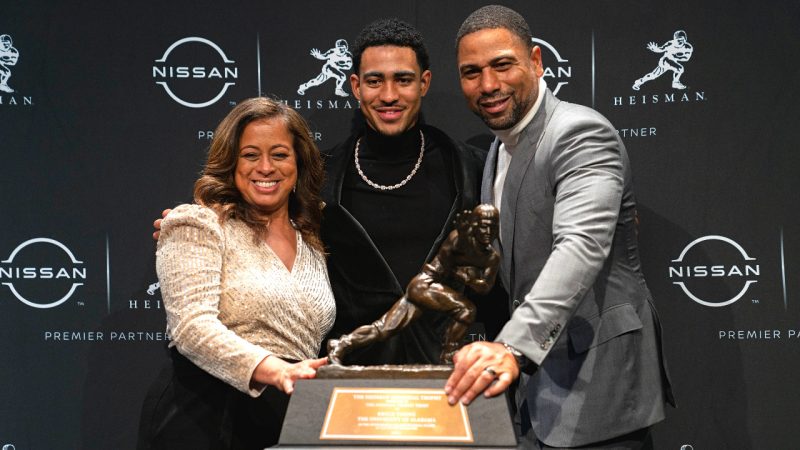 Craig Young, Bryce’s father, has been there for the countless big wins and award ceremonies. His proudest moment, though, came during the Heisman ceremony last year when Bryce thanked Jesus in front of a national television audience.

“This is amazing. First and foremost, I’d like to thank my Lord and Savior Jesus Christ,” Bryce said. “Without Him I couldn’t be here. And through Him all things are possible.”

“It was from him,” Craig recalled on Sports Spectrum’s “Transformed” podcast this summer. “It was a reflection of his own relationship with God.”

It might be cliche, but this is what Bryce Young is — a humble superstar.

He’s the kind of guy who refuses to drop his own name to get special treatment, and the kind of guy who never misses team chapel. In his apartment, his Bible and devotionals are clearly visible, not as a decoration but as a display of what his priorities are.

“Those things make me so proud because, at the end of the day, you can plant the seed and you can water it, but they have to make their own decision,” Craig said. “He’s made a decision [for] Christ. If we can do that as parents, it feels good.”

“I’m based in faith. I’m blessed to have the family that I do that introduced me [to faith] when I was young. Throughout my life, my relationship has grown with the Lord and my faith has improved. Through that, I work to be the best version of myself that I can be and to embody Christ in all that I do.” — Bryce Young

The life of a high-profile athlete can be glamorous at times, but it’s not without pressures and temptations. Even in high school, that can manifest itself in any number of ways. Being a leader in that environment is tough. Being someone who leads with their faith in God can often be even tougher.

It’s important to have a place to “avert your gaze,” Craig said, and instead point it toward Christ. That’s something Craig and his wife, Julie, taught Bryce at a young age, and it’s a lesson Bryce is grateful he learned.

“For me, it definitely goes to my roots. I’m based in faith,” he said. “I’m blessed to have the family that I do that introduced me [to faith] when I was young. Throughout my life, my relationship has grown with the Lord and my faith has improved. Through that, I work to be the best version of myself that I can be and to embody Christ in all that I do.”

That’s a lot easier to do during and after a win as opposed to a loss. But a lot can be gleaned from how an athlete deals with losses. Bryce does that as well as anyone, Rollinson said, and his teammates naturally gravitated toward him because of it. He had command of the huddle as soon as he took over, which was no easy task immediately following a QB like Daniels.

Bryce lost just two games at Mater Dei, both to St. John Bosco from Bellflower, California. Rollinson recalled what was an especially devastating 39-34 loss to No. 2 St. John Bosco in the state championship game, when his team was ranked No. 1 and undefeated that year — Young’s senior season. Mater Dei was up 28-12 at halftime and lost.

“In a time of crisis, he was there for his brothers,” Rollinson said.

That’s because his parents taught him that there’s growth in failure, and that his failures didn’t define him. His parents made sure he knew that God’s love, and theirs, was unconditional…

This story appears in the Fall 2022 issue of Sports Spectrum Magazine. To read the rest of it, and for more in-depth feature stories like it, subscribe to our quarterly magazine for only $24.