From the Archives: Jeremy VanSchoonhoven 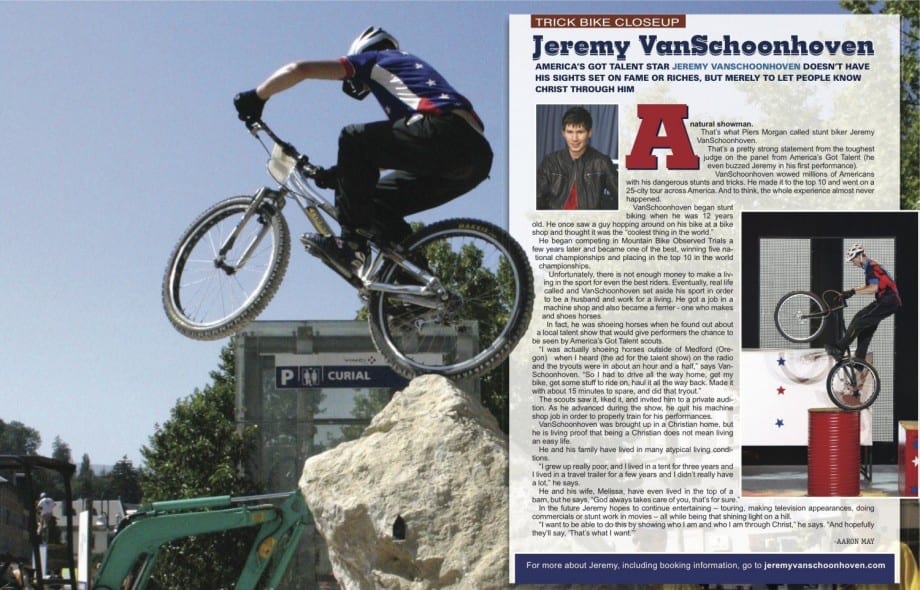 That’s a pretty strong statement from the toughest judge on the panel from America’s Got Talent (he even buzzed Jeremy in his first performance).

VanSchoonhoven wowed millions of Americans with his dangerous stunts and tricks. He made it to the top 10 and went on a 25-city tour across America. And to think, the whole experience almost never happened.

VanSchoonhoven began stunt biking when he was 12 years old. He once saw a guy hopping around on his bike at a bike shop and thought it was the “coolest thing in the world.”

He began competing in Mountain Bike Observed Trials a few years later and became one of the best, winning five national championships and placing in the top 10 in the world championships.

Unfortunately, there is not enough money to make a living in the sport for even the best riders. Eventually, real life called and VanSchoonhoven set aside his sport in order to be a husband and work for a living. He got a job in a machine shop and also became a ferrier – one who makes and shoes horses.

In fact, he was shoeing horses when he found out about a local talent show that would give performers the chance to be seen by America’s Got Talent scouts.

“I was actually shoeing horses outside of Medford (Oregon) when I heard (the ad for the talent show) on the radio and the tryouts were in about an hour and a half,” says VanSchoonhoven. “So I had to drive all the way home, get my bike, get some stuff to ride on, haul it all the way back. Made it with about 15 minutes to spare, and did that tryout.”

The scouts saw it, liked it, and invited him to a private audition. As he advanced during the show, he quit his machine shop job in order to properly train for his performances.
VanSchoonhoven was brought up in a Christian home, but he is living proof that being a Christian does not mean living an easy life.

He and his family have lived in many atypical living conditions.

He and his wife, Melissa, have even lived in the top of a barn, but he says, “God always takes care of you, that’s for sure.”

In the future Jeremy hopes to continue entertaining – touring, making television appearances, doing commercials or stunt work in movies – all while being that shining light on a hill.

“I want to be able to do this by showing who I am and who I am through Christ,” he says. “And hopefully they’ll say, ‘That’s what I want.’”