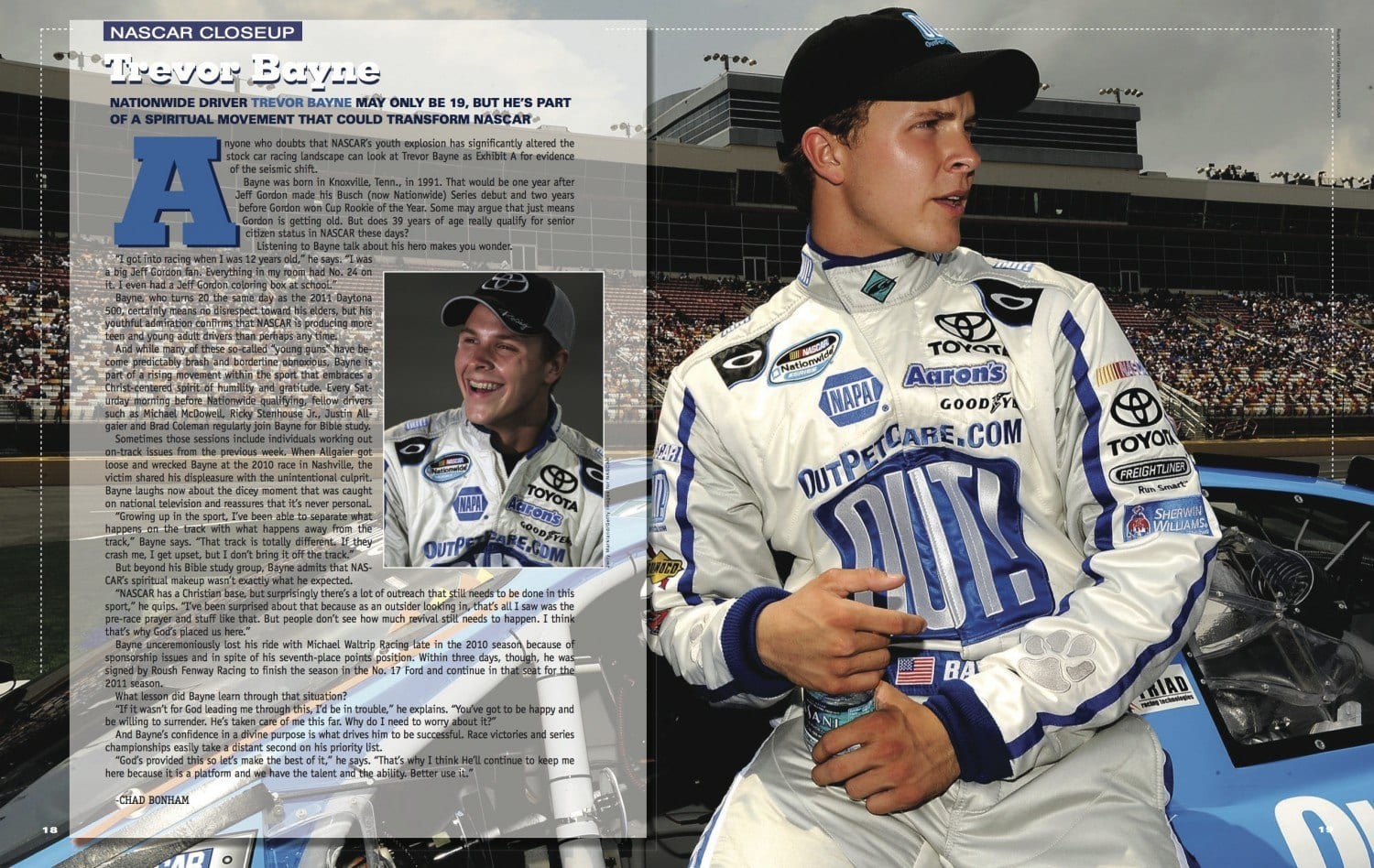 Trevor Bayne in the Daytona 500

Tonight, after rain delays and postponements, NASCAR will open it’s season with the Daytona 500 at 7 p.m. Trevor Bayne, last year’s out of nowhere rookie winner, will be looking to make it two straight. Despite the attention and fame that Bayne received from being the winner of America’s most famous stock car race, Bayne is still the same guy who loves the same God.

“You want to use those gifts and talents He’s given you for sure,” he said. “I talked to Tim Tebow a little bit and he said, ‘God’s given us that competitive drive and He wants us to have that drive. But just make sure you’re defined and get your identity through Him.'” (billiygraham.org)

Bayne, who was featured in Sports Spectrum beforehe won the Daytona 500 and became famous said, “NASCAR has a Christian base, but surprisingly there’s a lot of outreach that still needs to be done in this sport,” he quipped. “I’ve been surprised about that because as an outsider looking in, that’s all I saw was the pre-race prayer and stuff like that. But people don’t see how much revival still needs to happen. I think that’s why God’s placed us here.”

“God’s provided this so let’s make the best of it,” he said. “That’s why I think He’ll continue to keep me here because it is a platform and we have the talent and the ability. Better use it.”

Upon receiving the award, Durant said, “It’s just exciting to be named an All-Star, but to step it up another level and become MVP, it’s only something that as a kid you dream about. Coming from where I come from, I didn’t think I would be here. Everything has just been a blessing to me…I’m glad I’m taking this back to Oklahoma City.”

New Boston Red Sox manager Bobby Valentine has banned alcohol from the Red Sox clubhouse. This comes on the heels of a season where the Red Sox blew a 9 game lead in the Wild Card, have the only Red Sox manager to win a World Series in a century, Terry Francona, resign, have their long-time GM, Theo Epstein leave for the lovable loser Chicago Cubs, and have numerous reports from the Boston media about an undisciplined clubhouse that would see some of its pitchers drinking beer during games.

When asked about the reception it got amongst the team, Valentine said, “You mean like standing ovation or booing? I didn’t get either of those. It was probably somewhere in between a standing ‘O’ and standing boos.’’

ESPNBoston.com writes that first basemen Adrian Gonzalez, featured in the Fall 2011 issue of Sports Spectrum, will shoulder more of a leadership role with this year’s team.

“There were things that I saw and noticed [last season] that I’m not going to leave unaddressed if they need to be [addressed],” Gonzalez said. “With Bobby [Valentine] being our manager now, he’s going to set a lot of ground rules for that, too.” (ESPNBoston.com)

Wells Thompson: Scoring a Goal with the Gospel (JesusNSports.com)