Since 2009, Tampa Bay Buccaneers kicker Ryan Succop has been called “Mr. Irrelevant” after being the last overall pick in that year’s NFL Draft by the Kansas City Chiefs. Twelve years later and Succop can now be called a Super Bowl champion.

In Sunday’s Super Bowl LV, Succop’s Buccaneers stymied the team that drafted him in 2009, cruising to a 31-9 victory and the franchise’s second Super Bowl title. Succop, now 34, was perfect in his first appearance on the sport’s biggest stage. He made all four of his extra-point attempts and also drilled a 52-yard field goal late in the third quarter that proved to be the game’s final points.

“You guys won this game,” head coach Bruce Arians told his team during the trophy presentation. “You came together as a band of brothers and you made it happen. I’m so proud of all of you.”

This Super Bowl title, the crowning achievement of Succop’s NFL career so far, came in the Buccaneers’ home stadium, Raymond James Stadium. It was the first time in the history of the NFL that a team has played a Super Bowl in its home stadium.

Raymond James Stadium holds a special place in Succop’s heart for another reason as well.

This past August, Succop faced an uncertain NFL future following his release from the Tennessee Titans in March. Amid a pandemic, he was coming off of an injury-plagued and inconsistent 2019 season that stirred up self-doubt.

“I think that God sometimes puts adversity in our lives because He wants us to grow and wants to mold us,” Succop told WBTV in his hometown of Hickory, N.C., this week. “I think that is something I learned through that time last year. Just to know that God is good. He’s going to allow us to go through some difficult things, but when we keep our eyes on Him, things are going to work out.”

Succop eventually received a call from the Bucs to come down for a workout, and it was on that trip that he said he saw a sure sign from God that he should sign with Tampa.

“This is wild, but literally the night before that workout, I had been praying about this like, ‘Lord, if You want this for me and my family, I just trust You with it and I’ll just trust You to take care of it. And You’ll show me if You want us to be here or not,” he told Sports Spectrum recently.

As Succop walked out of his hotel that evening, he saw it.

“There’s a rainbow that goes directly over, and it looks like it goes directly into Raymond James Stadium. … It was unavoidable,” Succop said, “like I was like, ‘Oh my gosh, the Lord is showing me that He wants me to be here.’” 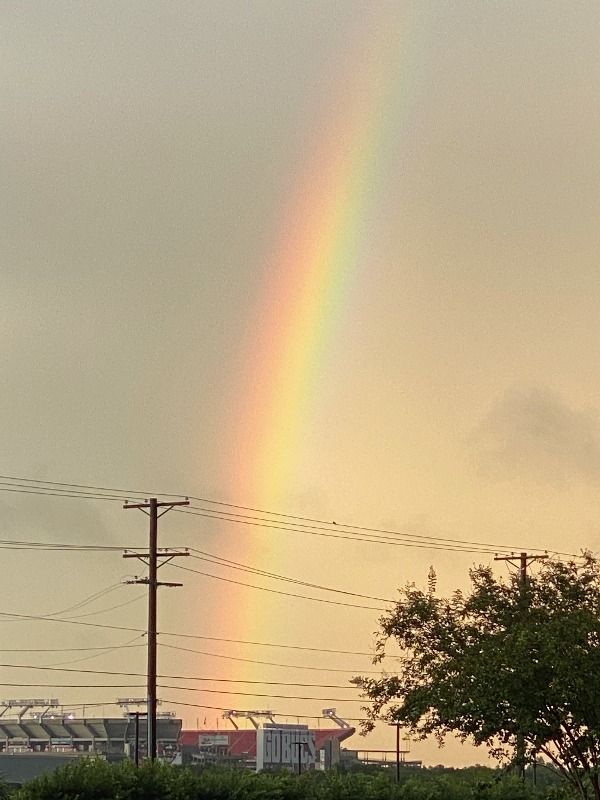 Succop soon signed a one-year deal, and his new surroundings re-energized him.

Throughout a socially distant season that saw the Bucs win 11 games for the first time since 2005, Succop found extra time to immerse himself in the Word, in prayer and in fellowship with other believers on the team. Before every game, Succop read Philippians 4:6-7.

On the field, he made 28 of this 31 field goal attempts (the second-best percentage of his career) and 52 of his 57 extra-point attempts. He finished the regular season ranked sixth in scoring with 136 points, and he was the NFL’s leading postseason scorer with 39 points.

His 46-yarder late in the fourth quarter of the NFC championship game — before which he said his usual prayer for peace — helped secure Tampa’s spot in Super Bowl LV:

Ryan Succop is GOOD from 46 yards out. @Buccaneers extend their lead, 31-23. #NFLPlayoffs

There to meet him in the big game was none other than the team that gave him his start in the NFL and made him “Mr. Irrelevant” in 2009, the Kansas City Chiefs. He spent his first five seasons in Kansas City, then joined the Titans in 2014, and it was there in January 2018 that Succop secured his first playoff win, a 22-21 comeback victory over the Chiefs.

Then on Sunday, in his first Super Bowl, playing in the stadium the Lord led him to, Succop won his first championship by defeating the Chiefs. Through the ups and the downs, God directed every step.

“When we trust Him, man, it’s amazing what He’ll do in our lives,” Succop told Sports Spectrum. ” … Sometimes I think God uses the challenging times to grow us and mold us. He’s the Master Potter and we’re the clay, and I think He uses these times to get the clay exactly how He wants it.”