Running the Race Set Before Him 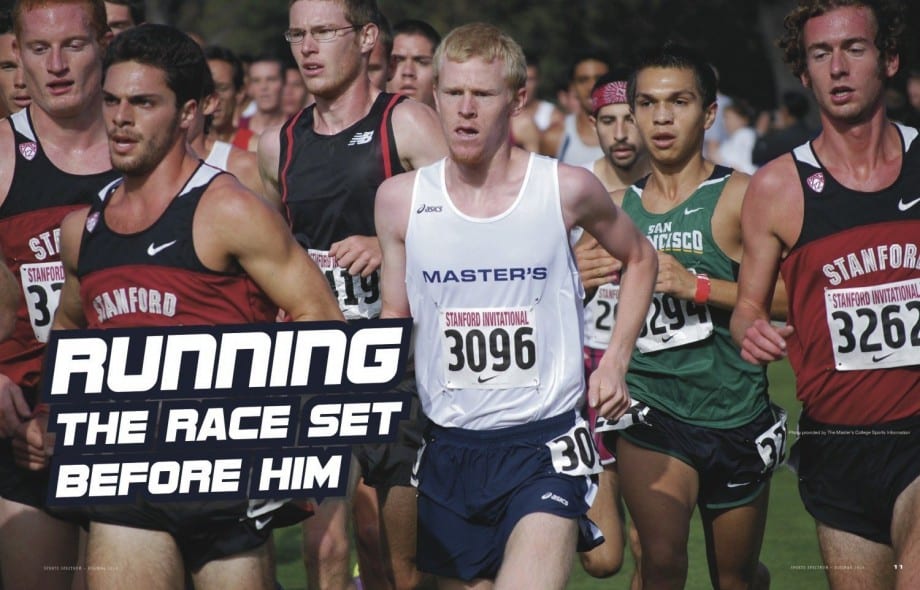 For the average college kid, a weekly schedule like the one listed above is a far cry from being considered “normal”.  But, for the above-average Mustang cross country and track athlete John Gilbertson, that is the life he lives, and the life he loves.

In fact, to him, that schedule is “normal.”

“John Gilbertson is the type of guy who practices excellence in every area of life,” said eighth-year Mustang track and field head coach Zach Schroeder. “To be an athlete that produces school record after school record, multiple NAIA All-American honors, an individual national championship title, and a world-leading time in the 10k, you have to be extremely disciplined.  I’ve never seen a collegiate athlete like John prepare to compete the way he does.”

But what makes him one of the top athletes The Master’s College has ever produced runs deeper than that.

“I only have one tradition on race day,” Gilbertson said. “The last song I play before each race is Hillsong’s ‘I Will Exalt You.’  That song focuses my attention, because that’s what I want to do. I want to exalt the Lord in my actions, and praise Him no matter the outcome. Every time I go to race, I go to win for the Lord.”

The classic movie, “Chariots of Fire” popularized the legendary Olympic sprinter and missionary Eric Liddell, and reminded the athletic world of I Samuel 2:30, in which God states, “For those who honor me, I will honor”.  Reminiscent of Liddell, the Lord has blessed Gilbertson, and it shows.

In the fall of 2012, Gilbertson won seven consecutive races that ultimately produced an undefeated personal season. Gilbertson capped off his season on Nov. 17 when he won the men’s 8K in 23 minutes and 56 seconds at the 2012 NAIA National Championship in Vancouver, Wash.

“It sounds selfish, but I kind of knew I was going to win it,” commented Gilbertson on the national championship race. “I knew I was ready, and I knew the Lord was with me.  I felt prepared and empowered.  I honestly wanted to win so that no other runner would take the glory for himself.  I wanted to give all the glory to the Lord and exalt Him.”

Gilbertson has a proven track record of applying that same attitude towards every other race he has competed in.

Schroeder can affirm that.

It’s accurate to say that Gilbertson’s testimony is what The Master’s College is looking for in its students, whether they are athletes or not.

As seen on the college’s website, “The mission of The Master’s College is to empower students for a life of enduring commitment to Christ, biblical fidelity, moral integrity, intellectual growth and lasting contribution to the Kingdom of God.”

One of the most important ways the college’s administration attempts to accomplish that in lives of TMC students is through the first point: “The Commitment to Christ through unreserved worship of God.”

Worship characterizes Gilbertson’s approach to his sport. In an interview dating back to his sophomore year, Gilbertston once said “I feel like each race day is a sacred day, and it shouldn’t be defiled by any kind of distractions. Race days are when I get to go out and worship God and exalt him, and that’s all I think about really when I’m racing and before the race also.”

It’s fair to say that John Gilbertson’s success can be linked to worship.  According to him, that’s all that running is.

Gilbertson embodies the approach to competing shared by all The Master’s College cross country and track athletes.

Under the leadership of coach Schroeder, TMC’s distance running program has carved a unique niche in the running world as the team boldly seeks first and foremost to use the gifts that God has endowed them with to glorify and worship His name.

Gilbertson, a captain for the Mustangs, further explained that “We view running as a gift from God, and fully want to invest in what He’s given us-not only running with excellence, but in all the little things that add up to it.  We ‘run in such a way that we may win’ (1 Cor. 9:24), not only in running, but also in life.  We strive to worship God through our running and in everything by being ‘All In.’”

And as Gilbertson graduates from The Master’s College in May with a bachelor’s degree in Biological Sciences, he’s already preparing for life that matches his daily schedule: disciplined and abnormal.

While most college kids are applying for jobs that will adequately pay off outstanding student loans, support themselves or a spouse, and launch them into the trajectory of a long-term career, Gilbertson has once again set his goals higher than the normal standard. Much higher.

“My post-collegiate plans are to compete in the 2016 Olympic Games.”

Knowing that this isn’t something one can decide to do on a whim, Gilbertson has begun the process of achieving his goal.

Already in communication with a number of professional coaches, Gilbertson hopes to earn a spot on an elite team.

And while his end-goal is to compete on the professional level, Gilbertson is still focusing just as much energy on his commitment to the Lord as he would be focusing on his training.

“It’s all about keeping your own life in an eternal perspective.  I want to be a testimony in the Santa Clarita Valley and throughout the world, and speak into other’s lives.  People see me and say that I’m fast and it is all done by my own athleticism. It’s not. I think of myself as someone being used by God. That’s who I am. A follower of Christ wanting to do his will.”

Hebrews 12:1-3 states: “Therefore, since we are surrounded by such a great cloud of witnesses, let us throw off everything that hinders and the sin that so easily entangles. And let us run with perseverance the race marked out for us, fixing our eyes on Jesus, the pioneer and perfecter of faith. For the joy set before him he endured the cross, scorning its shame, and sat down at the right hand of the throne of God. Consider him who endured such opposition from sinners, so that you will not grow weary and lose heart.”

John Gilbertson stands as a testament to the fact that the lives of a Bible-believing Christian and a long-distance runner have one thing in common: In order to achieve the goal, it takes discipline, faith, and perseverance…one step at a time.

Mike Crawford is the Sports Information Director at The Master’s College in Santa Clarita, Calif. This article originally ran in The Master’s Current.