Where are they now? closeup: David Robinson 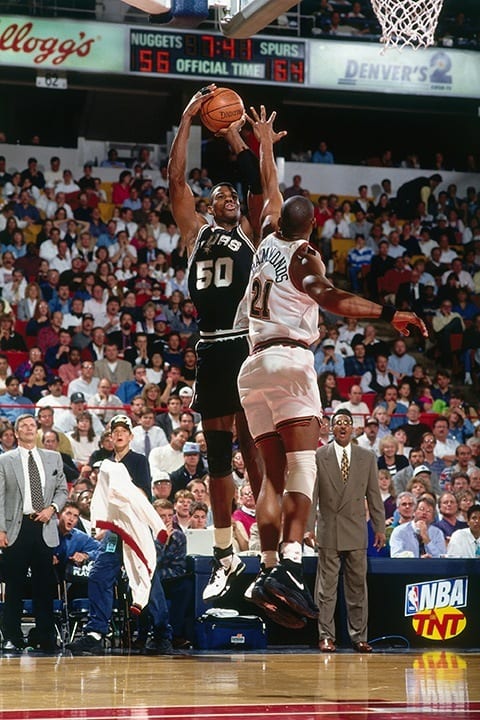 Former NBA star and Hall of Famer David Robinson earned the Distinguished Graduate Award from the U.S. Naval Academy’s Alumni Association on March 27 after demonstrating “commitment to a lifetime of service” and making “significant contributions to the U.S. Naval Academy, the Navy, the Marine Corps and the nation.”

“Our 2015 distinguished graduates join an elite group of leaders who are great role models for our Brigade of Midshipmen,” said Byron F. Marchant, president and CEO, U.S. Naval Academy Alumni Association and Foundation, who graduated from the academy in 1978. “They embody the Naval Academy mission and represent an extraordinary spectrum of achievement and service to the Naval Academy, their communities and our country.”

Robinson, who has appeared on the cover of Sports Spectrum the most of any athlete, received the award along with three others during the 17th annual ceremony.

After serving two years of active duty in the navy, he began playing with the NBA’s San Antonio Spurs. Impressively, during his first six years in the NBA, he served in the Naval Reserve, while also winning the 1990 NBA Rookie of the Year, the 1992 Defensive Player of the Year, the 1994 scoring title, and the 1995 MVP. He also played on three U.S. Olympic basketball teams (including the 1992 Dream Team), winning two gold medals and one bronze.

He’s not just resting on his past accomplishments, though. He has his hand in ventures outside of basketball now. He began the Admiral Capital Group and Admiral Capital Real Estate, and, along with this wife, Valerie, the IDEA Carver Academy, which was named after botanist and inventor George Washington Carver and provides more opportunities for inner-city children.

“I’d rather be out there moving for God because you can’t stand still,” said Robinson, who became a Christian in 1991, concerning his retirement. “You cannot. It’s a love, it’s a passion. God didn’t stand still and leave me out there, and it’s the same passion He’s given me for other people.”