Airing It Out: Mark Richt responds with grace, gratitude in adversity 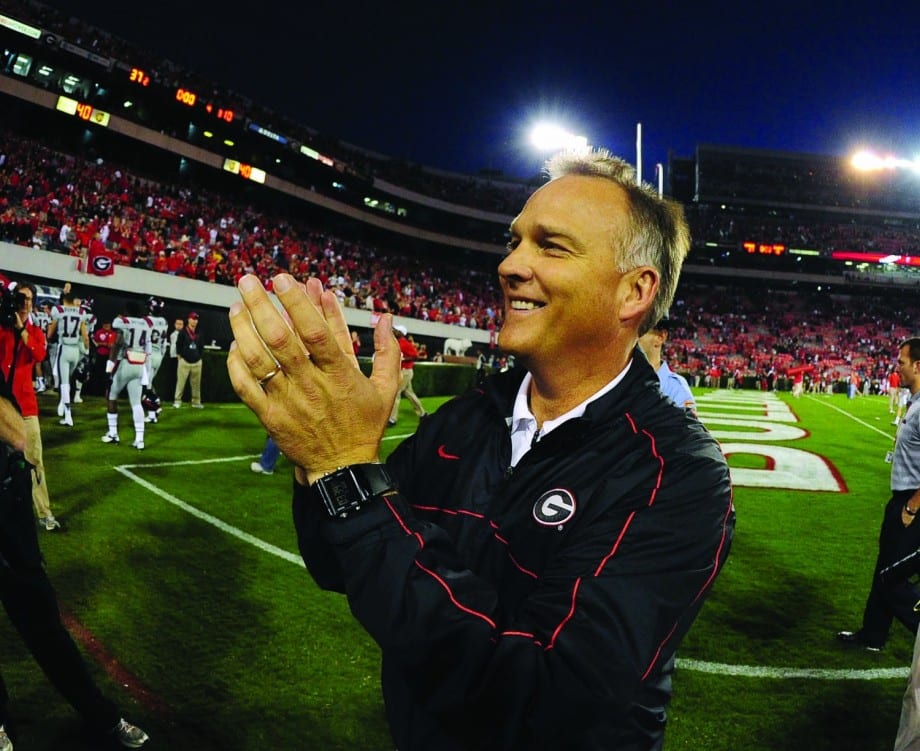 Most people would agree that it’s not, but that wins and losses are a huge determiner of coaches keeping their job.

Even if a coach wins, though, a salty coach who doesn’t get along with players, a coach who can’t control his players or even a coach who continually has NCAA violations while coaching won’t survive long before he’s fired.

Understanding that, one has to pause a minute (or two or maybe even a few days) to understand why the University of Georgia fired head football coach Mark Richt.

Richt put up wins (in 15 years, he was 145-51 overall, including 9-3 this season and 83-37 in the SEC, had nine 10-win seasons, and two SEC titles), was liked by his players (days after Richt’s firing he was cheered by Georgia players when he took the Miami of Florida job), and was liked and respected highly by administrators (so much so that not only was he continually praised for his character by Georgia Athletic Director Greg Garity during the press conference announcing his firing, but Richt was offered another job at Georgia because of his character).

So why was he fired?

Because he hadn’t won a national championship.

And, also, it didn’t matter that only two coaches (Oklahoma’s Bob Stoops and TCU’s Gary Patterson) had been coaching as long and won at the same or a better rate than Richt. Stoops has a .799 winning percentage in 17 years, and Patterson has a .751 percentage in 15 years (of the two, only Stoops has won a national title).

It was so shocking and disappointing that arguably the best coach in college football, Nick Saban, chimed in on the subject.

“I don’t know what the world’s coming to in our profession,” said Saban during a teleconference with reporters the day Richt’s firing was made public. “I hate to see people that have the character and quality and ability to affect young people in a positive way like Mark Richt not be a part of our profession.”

That Richt was hired days later by his alma-mater (Miami of Florida), didn’t make things right. It just proved the troubling state of college athletics; because if a top program hires someone days after another top program fired them after 15 seasons and a superb record, then something is wrong at the school where the coach was fired, not at the school that hired him.

To see Richt handle the firing like he did was a testament to his character.

“As I’ve said before, I really want God’s will for me,” Richt told reporters at the press conference. “I’m really at peace that it was part of His plan. I’m really just excited about what’s coming down the road, and I want to continue to try to be as obedient as I can be to the Lord, and I’ll see what He has in mind for Katharyn and I. We’re both at peace. We know we’ve both been blessed abundantly to be at the University of Georgia. Let’s face it. Fifteen years at a major institution, an SEC school, just to get the job to begin with is kind of a miracle. We’re thankful. We’re blessed.”

Again, though, it goes back to character.

Reminds me of Jesus’ attitude in the face of difficulty, when Peter cut off the right ear of Malchus (John 18:10), the high priest’s servant (Matthew 26:51) and Jesus immediately healed Malchus (Luke 22:51).

Despite what was happening (they had come to take Jesus to be crucified), and despite

Jesus knowing what was going to happen (abuse, torture, crucifixion), he was poised and was thinking about what was best for everyone—not just Himself.

It also reminds me of when Jesus was hanging on the cross and asked God to forgive the mockers and people who had a part in the crucifixion.

No, Richt was not abused, tortured or crucified, but he was unjustly wronged and remained focused on what God was doing or was going to do, and Richt was recounting the blessings God had given him.

How often do we, in the midst of trials, focus on what God has already done or what

He is preparing us for in the future?

Let’s make this attitude common in our lives as believers as we face trials, instead of it just being a nice Bible verse, story in the Bible or Christian philosophy that we read during our devotions or hear a preacher use during a service.

James 1:22 says, “Do not merely listen to the word, and so deceive yourselves. Do what it says.”

And what does God’s Word say about the example He wants us to follow?

“Let this mind be in you, which was also in Christ Jesus: Who, being in the form of God, thought it not robbery to be equal with God: But made himself of no reputation, and took upon him the form of a servant, and was made in the likeness of men: And being found in fashion as a man, he humbled himself, and became obedient unto death, even the death of the cross.”

Someone who was a humble, obedient servant.

That type of person can face something like Richt did and be excited, at peace, blessed abundantly and thankful.

And that type a person is worth hiring somewhere else any day.

This column was published in Sports Spectrum’s Winter 2016 print magazine. Log in HERE to view the issue. Subscribe HERE to receive eight issues of Sports Spectrum a year.