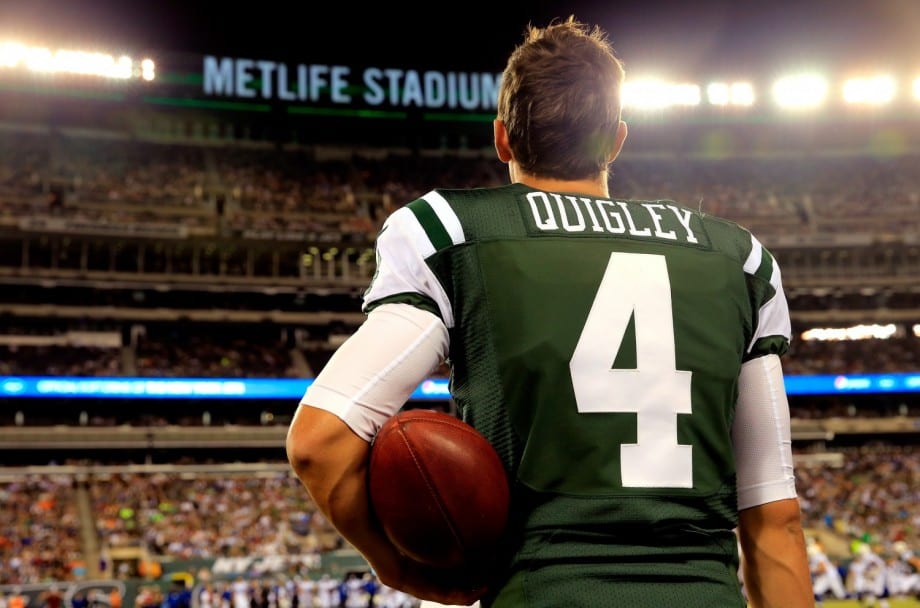 In this issue of Sports Spectrum, we featured New York Jets punter Ryan Quigley in our “Closeups” section. In case you have not yet read the story, I’ll give you a summary…

After being cut by the Chicago Bears in 2012, Quigley, through discipline and perseverance, climbed his way back into the NFL after a year-long absence from the league. Today, he just completed his third straight season as the Jets’ starting punter (that’s a terribly brief description, so you’ll have to read the story for a more romantic account of his journey).

Quigley’s story, and all it represents, means a great deal to me. That’s because I feel like I had a unique, front-row seat in watching Quigley pursue his dream of playing in the NFL. My best friend and I happened to room with Quigley in Charlotte, North Carolina, during the year when Quigley was out of the league—a pivotal year that would either make or break his dream.

To be honest, the experience of rooming with him still impacts me and inspires me to this day. I cannot say that is it mutual—that rooming with us inspires him—for my best friend and I are loud and messy, and we probably annoyed the living daylights out of him.

The first night of rooming with “Quigs,” we saw The Dark Knight Rises at the dollar theater and accidentally ran over a possum on the way home—we convinced Quigs that it was a cat. The gentle-hearted punter was crushed. Dark and twisted, I know, but we eventually told him it wasn’t a cat and was indeed a possum, which made everything better because, even though cats are horrible creatures, possums, by some unlucky draw of cards in the ecosystem, are worse.

“I thought they were psychos,” Quigley reflects. “I was like, ‘Oh my gosh, I’m rooming with these guys.’”

Another night, while Quigs was asleep, my roommate and I thought about tearing through the refrigerator and eating all twenty or thirty of Quigley’s yogurt cups (Quigs loved those yogurt cups). Mature, I know. We didn’t. But we laughed until our stomachs hurt, just thinking of the hypothetical scenario, and, like most nights, were obnoxiously loud in the living room while Quigs was probably tossing and turning in the room next door to the chaotic sounds of muffled cackling through the walls.

Through all that, and there were many more instances like these, Quigs still considers us friends…I think.

All goofiness aside, Quigs began rooming with us at a unique time in all of our lives. I was beginning to dabble with writing books; my best friend was launching his own company; and Quigs was trying to make it to the NFL.

We were just three guys in our 20s who were trying to figure things out. And this led to many deep conversations about faith and life, as we processed all of our questions and doubts with one another.

The thing that struck me about Quigs was that, whereas my roommate and I were making headway each day in the pursuit of our professional dreams, Quigley’s future seemed to be more uncertain than both of ours. That’s not to say that he wasn’t making progress, but I’m sure it felt that way at times for him; that’s because, after getting cut by the Bears, he went the duration of the year without receiving a call from another team.

Still, Quigs would wake up at around 6 a.m. each morning and go to Elon Park in South Charlotte for a punting workout. By the time he returned, somewhere between 9 a.m. and 10 a.m., I would usually be waking up for work, and we would sometimes have a cup of coffee together. I can still see him walking into our condo, morning after morning, in his athletic clothes, carrying his cleats and a football.

What struck me most profoundly about all of this was that his morning routine never changed, despite the lack of fruit from all his labor. His discipline and willingness to simply “show up,” each and every morning, despite the lack of calls he was receiving, is something that I think will be ingrained in me for a long time.

I think the reason this scene impacts me so much, on a personal level, is that, in some of the writing projects I am most passionate about, it is a mental and emotional battle just to simply show up at the computer each day. Sometimes, it means fighting off doubts and discouraging thoughts for an hour or two before I even type a word.

In a broader sense, I think all of us have something in our lives where God is calling us to simply show up and trust Him, not just with our futures, but in the process He is welcoming us into—a process that will inevitably mold us and shape us for the better, for our benefit.

“Charlotte was really where God kind of entered my life,” Quigley says. “Took away all the pressure, all the stress. Just gave me peace and security, living in the moment rather than thinking so far ahead into the future, knowing that He has a plan.”

As I enter 2016, I’m challenged to show up and remain disciplined, just as Quigley did, and joyfully enter the process of continually surrendering more and more. When we are becoming more like Christ, there’s no telling what might happen…or where we might go…or, perhaps most importantly, who we might become.

This column was published in Sports Spectrum’s Winter 2016 print magazine. Log in HERE to view the issue. Subscribe HERE to receive eight issues of Sports Spectrum a year.