Another Angle: Entering another level of learning

May this year be a marvelous exploration of that which we cannot understand, of stepping into another level of learning, of exploring a boundless sea yet always realizing that the horizon, though it looks like the edge of the earth, is only the beginning, only the very brink of our awareness of what is already true within, which, like the glistening waters beneath the sun, can reflect the flaming ball—hanging there in the blue, naked sky—in portions, yet cannot reflect all its light, and does not try to, for these waters know that they are not the sun and cannot be the sun (and do not even dare to “know”!), and therefore never cease to reflect sparkling slivers of its magnitude. Forgive us for believing we can see the edge. Forgive us for thinking that just because we see the ball in the distance we can therefore hold it in our palms. If I want to continue the voyage, if I wish to reflect the incomprehensible, then surely I cannot throw “You” at others as if I am flinging a baseball. You are not that simple and I am not that athletic. If no eye has seen and no ear has heard, then I am therefore blind and deaf—yet also free from dotting the i’s and crossing the t’s of mystery, for mystery has no alphabet, no words that can adequately describe the unfathomable, which is You…and You in me…and me in You. Won’t You forgive our ignorant simplicity? 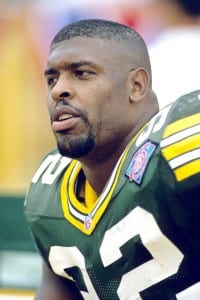 In our Winter 2016 print issue of Sports Spectrum, I wrote a story about Sara White, wife of late NFL Hall of Famer Reggie White, one of the most renowned outspoken Christians (nicknamed “The Minister of Defense”) to ever play in the NFL. In our interview, Sara transparently talked about some of the misconceptions that were floating around regarding Reggie’s faith before he died.

In Reggie’s final years, the Whites stopped celebrating holidays like Christmas and Easter, and they decided to no longer call themselves “Christians” (this, Sara says, put God in a box in our culture of labels) but called themselves “believers” instead. Because of all this, some concluded that Reggie had renounced his Christian faith; others believed he might have become a Jew; there was one Christian minister, Sara says, who called him a heretic.

My point in writing this column is not to rehash something that happened over a decade ago (Reggie died on December 26, 2004), but rather to explore a trend that still takes place within the church today.

Isn’t it interesting how some, specifically in the evangelical community, become irritated whenever someone comes along and begins to seemingly tamper with tradition, offer a different viewpoint, or peel back the wrapping paper of someone’s, or a denomination’s, perfectly packaged theological box?

Reggie White, for example, began to draw some of the conclusions that he did, not to gain attention—it would have actually been more convenient (and maybe even profitable) for him to stay in the box where Christian culture wanted him to remain—but rather because he was learning. He was delving into the Torah and the culture of the Old Testament, often studying the Hebrew language for eight hours a day. Ironically, it was Reggie’s diving into the Scriptures that led him to feeling ostracized by some of the church.

When I was in college, I remember bestselling author Rob Bell being publicly shunned in evangelical circles for his book Love Wins. Others that come to mind might be Michael Gungor, who came under fire in 2014 for statements that he and his wife Lisa made about creationism; or Donald Miller, who was criticized that same year for his blog about church. Truth is, all kinds of leaders in church history have held some unlikely views. Augustine, perhaps the most influential theologian to ever live, didn’t believe in a literal six-day creation story. Martin Luther, who spearheaded the Protestant reformation, was persecuted by the dominant church of his day. Oh yeah, there was that Jesus guy, too, ruffling the feathers of the pious Pharisees and Sadducees.

Now, I am not saying that ideas should not be batted back and forth or that people in leadership positions should not be asked to back up their theories, but I do think the evangelical church has, at times, made its theology into a god of its own, carrying the banner of absolute truth, therefore leaving little room for mystery—both in the divine and the scriptures. Donald Miller recently tweeted: “A map is not the same as the actual terrain. Our obsession with simplifying ideas is costing us a nuanced understanding of truth.”

There was a time, not too long ago, when I exhausted myself not only attempting to the dot the i’s and cross my t’s of my own theology but also trying to convince others that I was right and to believe what I believed—you know, in an effort to save their pitiful souls. I was a real jerk back then. And I was also a byproduct of our either-or, black-or-white culture and oversimplified Christianity. Yet the second we try to simplify the divine is the second we rob ourselves of mystery and cheapen the idea of God. The last couple of years, I have begun to discover wonder once more. This discovery never stops.

I hope that we, as believers, whatever that might mean to you, can continue exploring the boundless sea and continue reflecting something that no words can adequately explain. May we each move to a new level of learning in this phase of our lives, sit with disrupting ideas and explore our internal lives while swimming in the chaos. May we remember that we are far from the edge yet always close to His very essence—His “ruach,” His very Spirit—which is found within.