In the News: Matt Forte 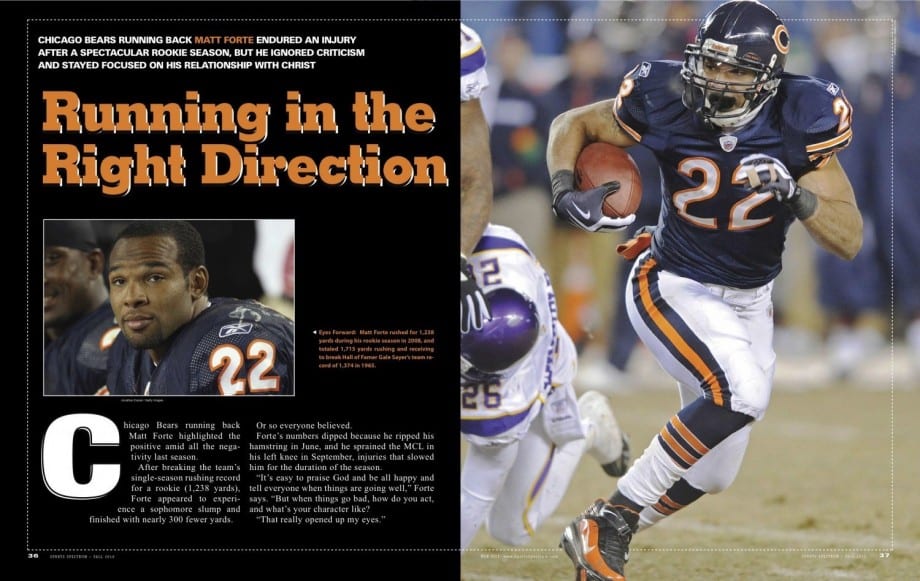 Tonight, two of the top running backs in the league in Philadelphia’s LeSean McCoy and Chicago’s Matt Forte will go up against one another. Forte is averaging 155.9 yards per game and is averaging 171.3 yards in his last four contests. He also has 38 receptions for 419 yards this season as the Bears’ primary receiver. Chicago Sun-Times columnist Sean Jensen wrote this story about Forte for Sports Spectrum’s Fall 2010 issue.

Running in the Right Direction

Chicago Bears running back Matt Forte highlighted the positive amid all the negativity last season.

After breaking the team’s single-season rushing record for a rookie (1,238 yards), Forte appeared to experience a sophomore slump and finished with nearly 300 fewer yards.

Or so everyone believed.

Forte’s numbers dipped because he ripped his hamstring in June, and he sprained the MCL in his left knee in September, injuries that slowed him for the duration of the season.

“It’s easy to praise God and be all happy and tell everyone when things are going well,” Forte says. “But when things go bad, how do you act, and what’s your character like?

“That really opened up my eyes.”

Forte may not have secured any Pro Bowl votes last season, but he earned the respect of his teammates and coaches for not using his injuries as an excuse.

“I’m sure he didn’t particularly like it,” Bears running backs coach Tim Spencer says of the criticism. “We knew he wasn’t a 100 percent. But he kept his mouth quiet, and he tried to work through the injuries.”

Forte, who had offseason surgery, is proud that he didn’t use his injuries as a crutch.

“It was difficult. It was really difficult, because I know what type of player I am,” Forte says. “But it builds character. When you can handle adversity like that, when other problems come along, you handle them even better.”

During the offseason, the Bears added Chester Taylor, who gained 1,216 rushing yards in 2006 for the Minnesota Vikings, and they endured endless questions about Forte’s future.

But Forte had a strong training camp, and he broke loose for an 89-yard touchdown run in the Aug. 21 preseason game against the Oakland Raiders.

“Oh man, I’m just so thankful. I thank God every night. It’s just amazing how you could be injured, and then recover, and God can take care of you that way,” Forte says. 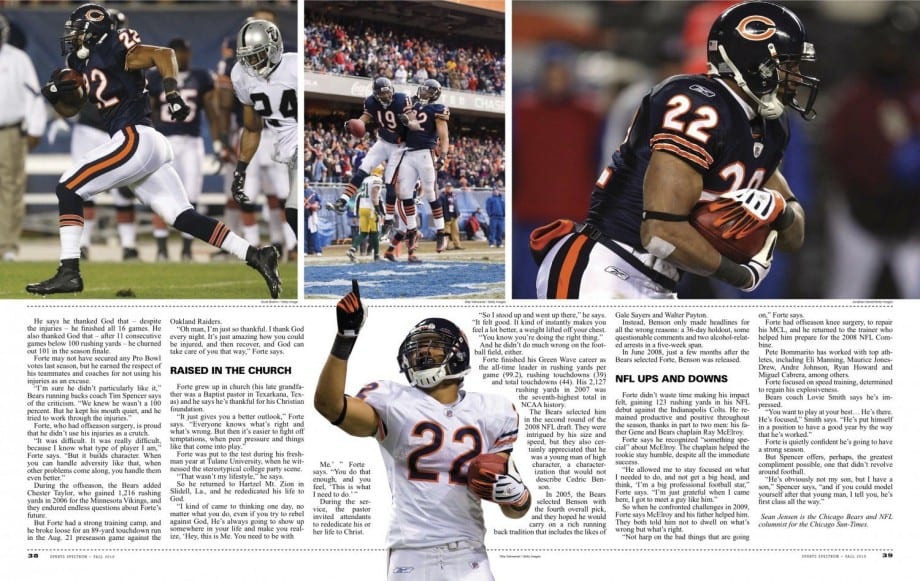 Raised in the Church

Forte grew up in church (his late grandfather was a Baptist pastor in Texarkana, Texas) and he says he’s thankful for his Christian foundation.

“It just gives you a better outlook,” Forte says. “Everyone knows what’s right and what’s wrong. But then it’s easier to fight off temptations, when peer pressure and things like that come into play.”

Forte was put to the test during his freshman year at Tulane University, when he witnessed the stereotypical college party scene.

“That wasn’t my lifestyle,” he says.

So he returned to Hartzel Mt. Zion in Slidell, La., and he rededicated his life to God.

“I kind of came to thinking one day, no matter what you do, even if you try to rebel against God, He’s always going to show up somewhere in your life and make you realize, ‘Hey, this is Me. You need to be with Me.’ ” Forte says. “You do that enough, and you feel, ‘This is what I need to do.’ ”

During the service, the pastor invited attendants to rededicate his or her life to Christ.

“So I stood up and went up there,” he says. “It felt good. It kind of instantly makes you feel a lot better, a weight lifted off your chest.

And he didn’t do much wrong on the football field, either.

Forte finished his Green Wave career as the all-time leader in rushing yards per game (99.2), rushing touchdowns (39) and total touchdowns (44). His 2,127 rushing yards in 2007 was the seventh-highest total in NCAA history.

The Bears selected him in the second round of the 2008 NFL draft. They were intrigued by his size and speed, but they also certainly appreciated that he was a young man of high character, a characterization that would not describe Cedric Benson.

In 2005, the Bears selected Benson with the fourth overall pick, and they hoped he would carry on a rich running back tradition that includes the likes of Gale Sayers and Walter Payton.

Instead, Benson only made headlines for all the wrong reasons: a 36-day holdout, some questionable comments and two alcohol-related arrests in a five-week span.

In June 2008, just a few months after the Bears selected Forte, Benson was released.

Forte didn’t waste time making his impact felt, gaining 123 rushing yards in his NFL debut against the Indianapolis Colts. He remained productive and positive throughout the season, thanks in part to two men: his father Gene and Bears chaplain Ray McElroy.

Forte says he recognized “something special” about McElroy. The chaplain helped the rookie stay humble, despite all the immediate success.

“He allowed me to stay focused on what I needed to do, and not get a big head, and think, ‘I’m a big professional football star,” Forte says. “I’m just grateful when I came here, I got to meet a guy like him.”

So when he confronted challenges in 2009, Forte says McElroy and his father helped him.

They both told him not to dwell on what’s wrong but what’s right.

“Not harp on the bad things that are going on,” Forte says.

Forte had offseason knee surgery, to repair his MCL, and he returned to the trainer who helped him prepare for the 2008 NFL Combine.

Forte focused on speed training, determined to regain his explosiveness.

“You want to play at your best… He’s there. He’s focused,” Smith says. “He’s put himself in a position to have a good year by the way that he’s worked.”

Forte is quietly confident he’s going to have a strong season.

But Spencer offers, perhaps, the greatest compliment possible, one that didn’t revolve around football.

“He’s obviously not my son, but I have a son,” Spencer says, “and if you could model yourself after that young man, I tell you, he’s first class all the way.”

Sean Jensen is the Chicago Bears and NFL Columnist for the Chicago Sun-Times. This story was published in the

Hall of Famer Tamika Catchings: 'Basketball chose me, but God had even bigger plans'