By Brett Honeycutt May 22, 2012
"I guarantee that no man of Tim Tebow’s stature could survive a season in New York without succumbing to the temptations of the city.” – Neal Biderman, CEO of an internet site. That statement by Neal Biderman alone would irk some people, but knowing the context would, likely, disgust everyone... 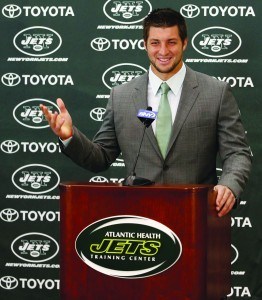 “I guarantee that no man of Tim Tebow’s stature could survive a season in New York without succumbing to the temptations of the city.” – Neal Biderman, CEO of an internet site.

That statement by Neal Biderman alone would irk some people, but knowing the context would, likely, disgust everyone.

The context is that Biderman said this in late April after offering $1 million to anyone proving that they slept with Tebow, who is a virgin and saving himself for marriage.

As biblical and God-honoring as Tebow’s commitment is concerning this, Biderman’s offer is equally dark and despicable.

Biderman also said: “Sports and sex (and of course, infidelity) go hand in hand. If Mr. Tebow is indeed abstaining from adult relationships, I would encourage him to find a nice lady or two and enjoy his youth and fame as much as possible.”

However, the issue isn’t necessarily Biderman’s $1 million offer or his provocative and disgusting ideas concerning relationships. It’s the fact that the idea, alone, is present in someone’s mind.

Even more troubling, though, is that Christians are surprised by Biderman’s ideas and behavior.

But they shouldn’t be, especially if they read their Bibles.

You’re probably puzzled if you’re a peripheral reader of Scripture because you recognize David as a man after God’s own heart (I Samuel 13:14 and Acts 13:22), but read on.

All of that is disheartening, disgusting, despicable and dark, and I’m not even telling you everything.

But I give you that look into David’s life to point out that the Bible talks about some hard subjects, which should make us aware that despicable sin (do I have to use that adjective to describe sin? I mean, any sin is really despicable) is present. It is present with God’s people, and it is certainly present in people who will never trust or believe in God.

In a nutshell, we shouldn’t be surprised by anything in the world today that runs contrary to God’s ways. It should disgust us, no doubt, but most importantly it should spur us, energize us and awaken us to the sin that is in this world and, most importantly, it should lead us to pray for Christians who have a target on their back. If you are living for Christ, and honoring God, that means you. You don’t have to be a famous athlete who honors God. All you have to be is a committed follower of Christ.

If you doubt that you will face trials, read James 1:2-4, “Consider it pure joy, my brothers and sisters, whenever you face trials of many kinds, because you know that the testing of your faith produces perseverance. Let perseverance finish its work so that you may be mature and complete, not lacking anything.”

As a side note, what would be ironic is if Tim Tebow married and then his wife asked Biderman for the $1 million. It would be ironic because Biderman, the CEO of a website that promotes infidelity, would have to pony up $1 million to someone who actually fulfilled his request, but did so in the context of a committed marriage.

And the evidence? An ultrasound.

Now, that would be something that not even the world would be expecting.

This column was published in the May 2012 Sports Spectrum DigiMag. Print and digital subscribers, log in and view the issue here. Brett Honeycutt is the managing editor of Sports Spectrum magazine. His column addresses topics from a biblical perspective. Follow him on Twitter-@Brett_Honeycutt.