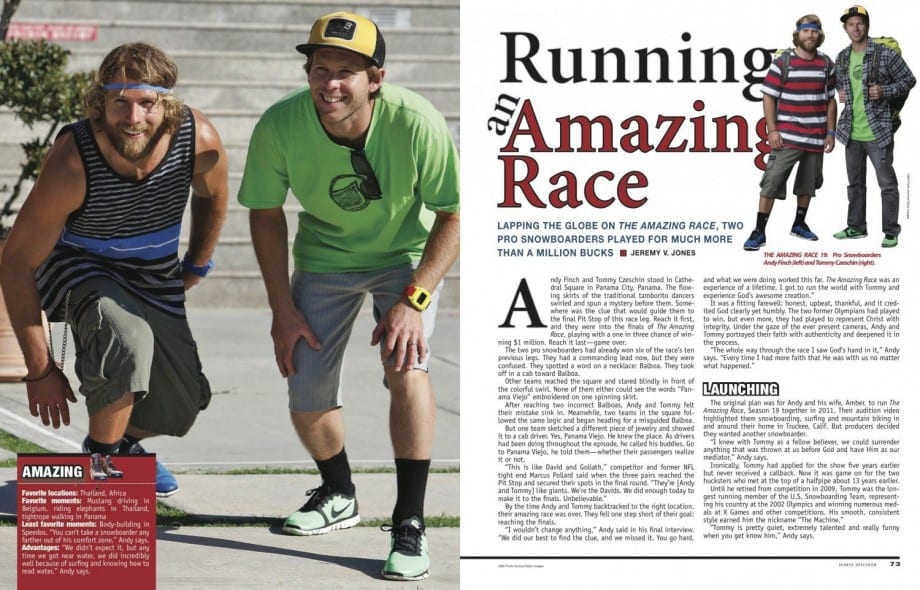 Andy Finch and Tommy Czeschin stood in Cathedral Square in Panama City, Panama. The flowing skirts of the traditional tamborito dancers swirled and spun a mystery before them. Somewhere was the clue that would guide them to the final Pit Stop of this race leg. Reach it first, and they were into the finals of The Amazing Race, playing with a one in three chance of winning $1 million. Reach it last—game over.

The two pro snowboarders had already won six of the race’s ten previous legs. They had a commanding lead now, but they were confused. They spotted a word on a necklace: Balboa. They took off in a cab toward Balboa.

Other teams reached the square and stared blindly in front of the colorful swirl. None of them either could see the words “Panama Viejo” embroidered on one spinning skirt.

After reaching two incorrect Balboas, Andy and Tommy felt their mistake sink in. Meanwhile, two teams in the square followed the same logic and began heading for a misguided Balboa.

But one team sketched a different piece of jewelry and showed it to a cab driver. Yes, Panama Viejo. He knew the place. As drivers had been doing throughout the episode, he called his buddies. Go to Panama Viejo, he told them—whether their passengers realize it or not.

“This is like David and Goliath,” competitor and former NFL tight end Marcus Pollard said when the three pairs reached the Pit Stop and secured their spots in the final round. “They’re [Andy and Tommy] like giants. We’re the Davids. We did enough today to make it to the finals. Unbelievable.”

By the time Andy and Tommy backtracked to the right location, their amazing race was over. They fell one step short of their goal: reaching the finals.

“I wouldn’t change anything,” Andy said in his final interview. “We did our best to find the clue, and we missed it. You go hard, and what we were doing worked this far. The Amazing Race was an experience of a lifetime. I got to run the world with Tommy and experience God’s awesome creation.”

It was a fitting farewell: honest, upbeat, thankful, and it credited God clearly yet humbly. The two former Olympians had played to win, but even more, they had played to represent Christ with integrity. Under the gaze of the ever present cameras, Andy and Tommy portrayed their faith with authenticity and deepened it in the process.

“The whole way through the race I saw God’s hand in it,” Andy says. “Every time I had more faith that He was with us no matter what happened.” 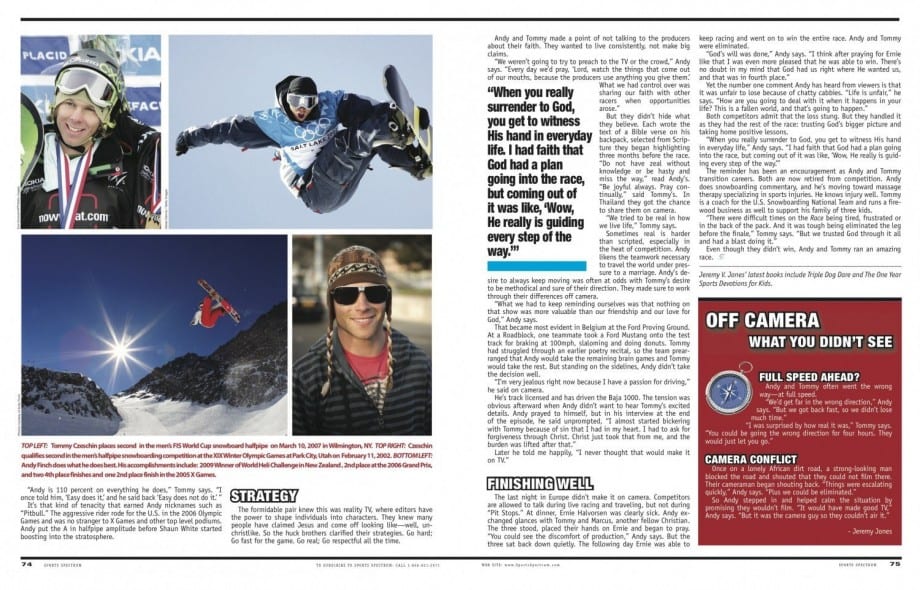 The original plan was for Andy and his wife, Amber, to run The Amazing Race, Season 19 together in 2011. Their audition video highlighted them snowboarding, surfing and mountain biking in and around their home in Truckee, Calif. But producers decided they wanted another snowboarder.

“I knew with Tommy as a fellow believer, we could surrender anything that was thrown at us before God and have Him as our mediator,” Andy says.

Ironically, Tommy had applied for the show five years earlier but never received a callback. Now it was game on for the two hucksters who met at the top of a halfpipe about 13 years earlier.

Until he retired from competition in 2009, Tommy was the longest running member of the U.S. Snowboarding Team, representing his country at the 2002 Olympics and winning numerous medals at X Games and other competitions. His smooth, consistent style earned him the nickname “The Machine.”

“Tommy is pretty quiet, extremely talented and really funny when you get know him,” Andy says.

It’s that kind of tenacity that earned Andy nicknames such as “Pitbull.” The aggressive rider rode for the U.S. in the 2006 Olympic Games and was no stranger to X Games and other top level podiums. Andy put the A in halfpipe amplitude before Shaun White started boosting into the stratosphere.

The formidable pair knew this was reality TV, where editors have the power to shape individuals into characters. They knew many people have claimed Jesus and come off looking like—well, unchristlike. So the huck brothers clarified their strategies. Go hard; Go fast for the game. Go real; Go respectful all the time.

Andy and Tommy made a point of not talking to the producers about their faith. They wanted to live consistently, not make big claims.

“We weren’t going to try to preach to the TV or the crowd,” Andy says. “Every day we’d pray, ‘Lord, watch the things that come out of our mouths, because the producers use anything you give them.’ What we had control over was sharing our faith with other racers when opportunities arose.”

But they didn’t hide what they believe. Each wrote the text of a Bible verse on his backpack, selected from Scripture they began highlighting three months before the race. “Do not have zeal without knowledge or be hasty and miss the way,” read Andy’s. “Be joyful always. Pray continually,” said Tommy’s. In Thailand they got the chance to share them on camera.

“We tried to be real in how we live life,” Tommy says.

Sometimes real is harder than scripted, especially in the heat of competition. Andy likens the teamwork necessary to travel the world under pressure to a marriage. Andy’s desire to always keep moving was often at odds with Tommy’s desire to be methodical and sure of their direction. They made sure to work through their differences off camera.

“What we had to keep reminding ourselves was that nothing on that show was more valuable than our friendship and our love for God,” Andy says.

That became most evident in Belgium at the Ford Proving Ground. At a Roadblock, one teammate took a Ford Mustang onto the test track for braking at 100mph, slaloming and doing donuts. Tommy had struggled through an earlier poetry recital, so the team prearranged that Andy would take the remaining brain games and Tommy would take the rest. But standing on the sidelines, Andy didn’t take the decision well.

“I’m very jealous right now because I have a passion for driving,” he said on camera.

He’s track licensed and has driven the Baja 1000. The tension was obvious afterward when Andy didn’t want to hear Tommy’s excited details. Andy prayed to himself, but in his interview at the end of the episode, he said unprompted, “I almost started bickering with Tommy because of sin that I had in my heart. I had to ask for forgiveness through Christ. Christ just took that from me, and the burden was lifted after that.”

Later he told me happily, “I never thought that would make it on TV.”

The last night in Europe didn’t make it on camera. Competitors are allowed to talk during live racing and traveling, but not during “Pit Stops.” At dinner, Ernie Halvorsen was clearly sick. Andy exchanged glances with Tommy and Marcus, another fellow Christian. The three stood, placed their hands on Ernie and began to pray. “You could see the discomfort of production,” Andy says. But the three sat back down quietly. The following day Ernie was able to keep racing and went on to win the entire race. Andy and Tommy were eliminated.

“God’s will was done,” Andy says. “I think after praying for Ernie like that I was even more pleased that he was able to win. There’s no doubt in my mind that God had us right where He wanted us, and that was in fourth place.”

Yet the number one comment Andy has heard from viewers is that it was unfair to lose because of chatty cabbies. “Life is unfair,” he says. “How are you going to deal with it when it happens in your life? This is a fallen world, and that’s going to happen.”

Both competitors admit that the loss stung. But they handled it as they had the rest of the race: trusting God’s bigger picture and taking home positive lessons.

“When you really surrender to God, you get to witness His hand in everyday life,” Andy says. “I had faith that God had a plan going into the race, but coming out of it was like, ‘Wow, He really is guiding every step of the way.’”

The reminder has been an encouragement as Andy and Tommy transition careers. Both are now retired from competition. Andy does snowboarding commentary, and he’s moving toward massage therapy specializing in sports injuries. He knows injury well. Tommy is a coach for the U.S. Snowboarding National Team and runs a firewood business as well to support his family of three kids.

“There were difficult times on the Race being tired, frustrated or in the back of the pack. And it was tough being eliminated the leg before the finale,” Tommy says. “But we trusted God through it all and had a blast doing it.”

Even though they didn’t win, Andy and Tommy ran an amazing race.