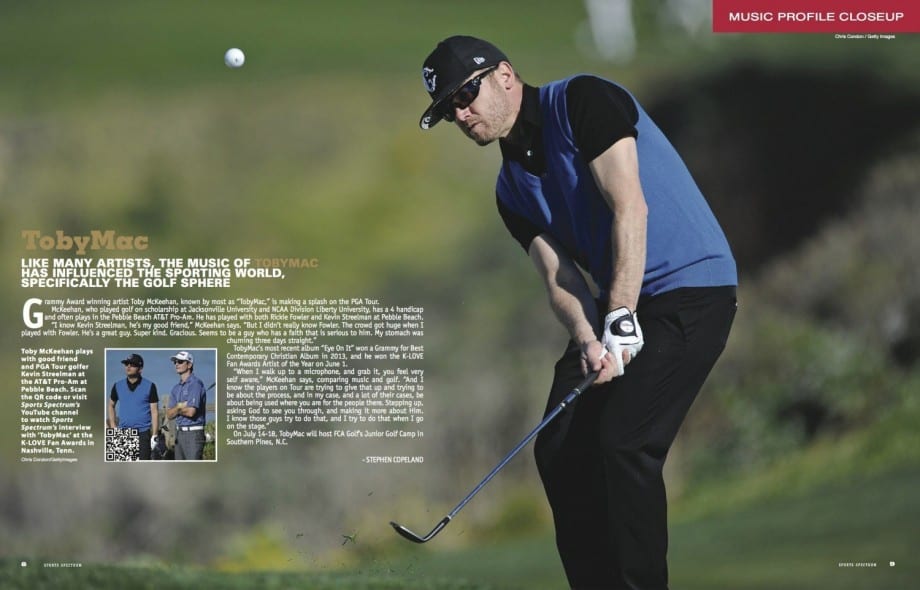 Grammy Award winning artist Toby McKeehan, known by most as “TobyMac,” is making a splash on the PGA Tour.

McKeehan, who played golf on scholarship at Jacksonville University and NCAA Division Liberty University, has a 4 handicap and often plays in the Pebble Beach AT&T Pro-Am. He has played with both Rickie Fowler and Kevin Streelman at Pebble Beach.

“I know Kevin Streelman, he’s my good friend,” McKeehan says. “But I didn’t really know Fowler. The crowd got huge when I played with Fowler. He’s a great guy. Super kind. Gracious. Seems to be a guy who has a faith that is serious to him. My stomach was churning three days straight.”

TobyMac’s most recent album “Eye On It” won a Grammy for Best Contemporary Christian Album in 2013, and he won the K-LOVE Fan Awards Artist of the Year on June 1.

“When I walk up to a microphone, and grab it, you feel very self aware,” McKeehan says, comparing music and golf. “And I know the players on Tour are trying to give that up and trying to be about the process, and in my case, and a lot of their cases, be about being used where you are for the people there. Stepping up, asking God to see you through, and making it more about Him. I know those guys try to do that, and I try to do that when I go on the stage.”