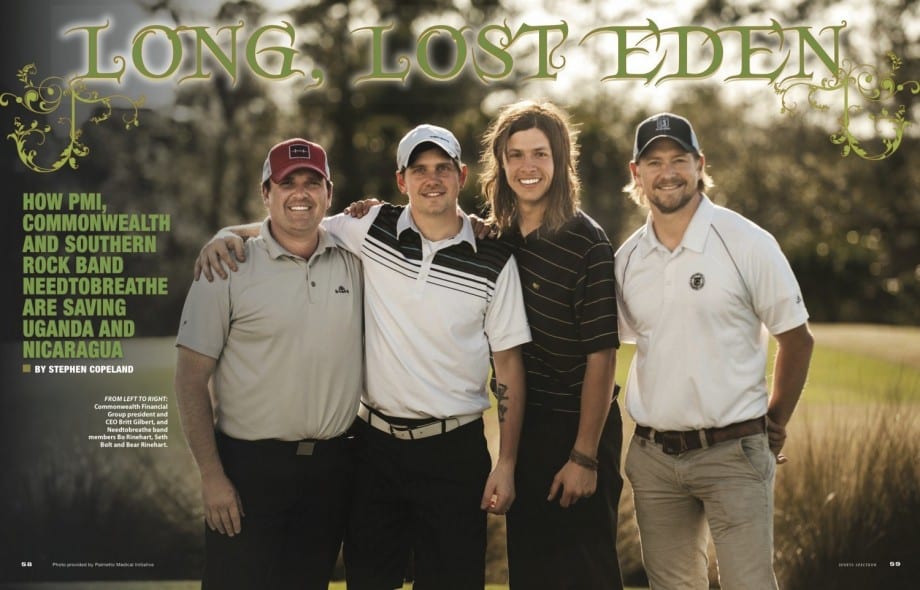 The stars felt so close it’d be easy to think God Himself had come down from His throne.

He knelt below them, his heart heavy, his mind swallowed by sorrow and sin. He stared up at the sky, the heavens his only comfort to his understanding. His skin bore a drop of blood. It slowly fell from his wound and swam down his cheek.

He was dying, and he knew it.

A Ugandan girl came up to Britt Gilbert at Palmetto Medical Initiative’s clinic in Masindi, Uganda. She was 12 years old, just like his daughter back at home in Charleston, S.C. She was the same height, too.

Gilbert looked down at the girl’s leg and noticed that she had a compound fracture of the tibia. The bone was protruding from her skin. The translator in the clinic told Gilbert it had been like that for the last 16 months.

Gilbert got angry. It wasn’t fair.

Back in Charleston, he owned a successful business, Commonwealth Financial Group, and he had a beautiful family. Yet here was a girl standing in front of him who was probably permanently disabled, not because it wasn’t treatable, but because there was no treatment.

The saddest thing was that the 12-year-old girl’s situation was normal. In Uganda, there is only one doctor per every 12,500 Ugandans. There may be a public health care system in place, but it doesn’t adequately serve people. The private system isn’t affordable since most Ugandans make less than $1 a day.

People show up at the clinic with illnesses and injuries you only see on movies and commercials—8-year-olds with bones sticking out of their arms; children with softball-like infections in their chests. It’s all so unnatural. It’s a completely different world—a world that is much more comfortable, frankly, to simply forget about.

Ideas are cool things. They have no restrictions. In a world of qualifications, resumés, and LinkedIn profiles, the refreshing thing about ideas is that they have no bounds.

The Palmetto Medical Initiative (PMI) was dreamt up by a couple of kids on surfboards. That’s right. Kids.

Matt Alexander, 26 at the time, and Ed O’Bryan, who had just finished up medical school, were surfing at Charleston’s Folly Beach one summer day three years ago, when their conversation shifted from the waves to across the ocean.

They dreamt up PMI. Its purpose: Provide quality, affordable health care to Ugandans.

“I think we were both just at a place where we were ready to do something,” Alexander says. “I know I was.”

Their passion for global missions was already there, rooted in O’Bryan’s career and Alexander’s veins. O’Bryan had done a number of medical missions on a global scale, and Alexander spent a lot of time in Africa because his parents adopted six children from the continent.

In PMI’s early stages, Commonwealth Financial Group, a local business owned by Gilbert, helped Alexander and O’Bryan connect them with accountants and attorneys and organize the non-profit.

That’s how Gilbert met the founders of PMI; how Commonwealth Cares Foundation, the charitable arm of Commonwealth Financial Group, got behind PMI; and ultimately how Gilbert wound up in Uganda in 2011, when he was moved by the 12-year-old girl’s condition, a moment that changed his life.

The organizations were made to marry.

Commonwealth Cares Foundation, which started in 2007, already had an annual golf tournament in Charleston to raise money for charitable causes. But once PMI came along, Gilbert made the tournament theirs.

They built a clinic in Masindi, Uganda; it started treating hundreds of Ugandans a month, never turning anyone away (unlike the government); and the goal was to staff the clinic with well-trained native doctors so they could build more clinics in other countries.

But it would take more than Commonwealth’s backing. They had a system. They had a vision. But they needed more support.

“We can take it anywhere,” Alexander says. “It’s just a matter of money.”

There really couldn’t be a more fitting name for Needtobreathe’s third album, released in 2009.

The southern rock band is undoubtedly different, but in the most authentic of ways. The band consists of two brothers, Bear (named after legendary Alabama football coach Bear Bryant) and Bo Rinehart, and Seth Bolt.

They didn’t grow up in Nashville. They weren’t plugged into the music vessel. They grew up on a South Carolina farm in a town called Possum Kingdom. Maybe 100 people lived there, and the music scene was non-existent. Their rise to stardom has been far from conventional, and they developed an “us against the world” mindset, hints the name The Outsiders.

“We were writing songs in our bedroom and our garage at the start, and we’re still doing the same thing,” says Bear, the band’s lead singer. “That’s never changed.”

They shied away from the Christian label because they feel they are broader in scope than that. They sing about life. They sing about relationships. They sing about God. To have fun, they once dressed as women on Halloween night while performing “Girl Named Tennessee” on Conan—which isn’t exactly something Chris Tomlin would likely do.

“Each record, a certain percent of our faith is on there, but it comes out naturally,” Bear says. “We didn’t want to write records just for a group of people, especially Christians. They have enough records just for them,” he laughs.

Needtobreathe is real. They are true. And nothing, perhaps, shows their authenticity more than their involvement with PMI.

“I got to go to Uganda with PMI, and it kind of blew my mind, to be honest,” Bear says. “The first day I was there, I went into the government hospital, and all they have is about three months of medications for the year. Once you run out of that, you are done. If you can’t afford medicine for yourself, you are done.

“The same day, we went to the clinic that PMI has built there, and it’s clean and efficiently run and staffed by Ugandans, and I was blown away by the idea that it’s not about us giving away a bunch of money to temporarily solve a problem, but teaching them how to do it themselves. That was inspiring to me. So, coming home, it was like, ‘How can we help them do what they do?’ Because they got it figured out.”

Bo, who not only plays lead guitar but is also a talented graphic designer, designed posters to sell on their 2010 Tour to raise money for PMI. They also organized a high-ticket price concert at a tiny bar on James Island and raised $20,000. When they played in front of 2 million people touring with Taylor Swift in 2011, Bear talked about PMI in stadiums of 50,000; Bo designed t-shirts; they played “Secret Shows” in the cities they were touring; and they gave $5 to PMI per CD they sold.

PMI exploded as Needtobreathe exploded. PMI grew as the band’s popularity grew. The timing of everything is either lucky or divine.

“You have a lot of people in the music industry who have a cause they endorse,” Alexander says. “The difference with Needtobreathe is that they take an incredible hands-on approach to everything they do with us. It’s just a different level of involvement and support.”

The tournament raised $80,000 this year and will go toward PMI’s new plans of building a clinic in Nicaragua. Only three years into the company’s lifespan, the clinic in Uganda is fully sustainable, run by well-trained Ugandans, and treats more than 1,500 people a month.

“It’s so empowering to be able to help people, and it feels even more that way when you step outside of what your talents are,” Bear says. “You are a part of something that’s bigger than you are.”

The sorrow He felt—there beneath the stars, the most desperate state He’d ever been, on the brink of death, covered in blood and tears—stretched far beyond the sadness inked in the Psalms and the sins of Sodom. It was a wound tattooed in the depths of eternity—beginning with the decisions of Eden and coming to fruition in Gethsemane—something complex, messy, incomprehensible and beautiful.

There in the garden, sweating drops of blood as He cried to the heavens, Christ uttered something that changed everything: “Yet not my will, but yours be done.”

Yet not my will, but yours be done.

The 13th song on Needtobreathe’s The Outsiders album is called “Garden,” and it’s all about Jesus in the Garden of Gethsemane, the chorus echoing the words of Christ:

Let the songs I sing bring joy to You,
Let the words I say profess my love,
Let the notes I choose be Your favorite tune,
Father let my heart be after You.

Those words are the direction, motive, and thread behind the triumvirate of entities—PMI, Commonwealth and Needtobreathe—uniting around Uganda and Nicaragua. And it’s a challenge to everyone.

Can your life and mission be summed up in the chorus of Gethsemane or are you tangled in the selfishness of Eden? Because when your heart is after the Father, as the lyrics proclaim, you end up doing things you never imagined, like telling 2 million people about PMI, or raising $80,000 at a golf tournament, or treating 1,500 patients a month in Uganda.

“When God gives you a strong vision and allows you to see something in an opportunity and constantly affirms that by surrounding you with other people who are passionate and excited, it only takes so long of doors opening and things coming together before you realize you are part of the process, but you’re not in control of it,” Alexander says. “God had a vision before we ever knew of it. We see it more clearly each day.”

Destruction may grow in Eden but Gethsemane restores—Uganda, Nicaragua and all.