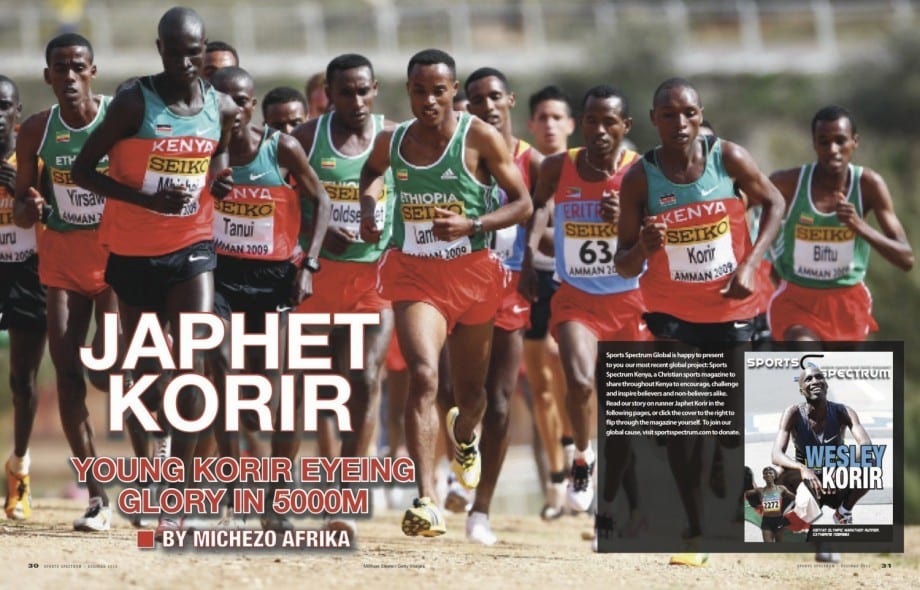 At 19 years old, Kenya’s Japhet Korir became the youngest senior men’s champion in the history of the IAAF World Cross Country Championships when he won the event this past March in Bydgoszcz, Poland.

The humble Korir, who turned 20 on June 30, was not aware he was the youngest to have won the race.

On the finish line, Korir showed his excitement with the news, “Ah okay!! I didn’t know I have the record.”

Minutes before, he had floored defending champion Imane Merga of Ethiopia in spectacular style.

Korir, who announced his desire to compete in the 5000m event for the World Athletics Championships, will have to be at his best when Kenya holds her national championships and trials in June and July. In the past, Kenya has produced even greater athletes in that distance. In order for Korir to make it on the Kenyan team for Moscow, he will have to beat 2012 Olympians Thomas Longosiwa (5000m bronze medalist), Edwin Soi, and Isaiah Koech.

The youngster, who hails from Kericho, says it was incredible to prove his critics wrong since taking him to Poland was considered a big gamble. Months before during the national trials this past February, Korir finished sixth and was not considered a threat to be on the podium at the world championships.

As he reminisces, “I was unaware I became the youngest winner in the senior men’s race until a reporter mentioned it to me after the race. It was indeed a great achievement to me, given the fact that I was racing with the best athletes in the world. I give praise to the almighty Lord for raising me higher.”

Korir’s running days date back to when he was a pupil at Kiplelgutik Primary School in Kericho County, where he took part in several running competitions in school. Going to school in the morning, to lunch, and back home always involved running; little did he know it would take him this far.

Korir’s credentials were noticed while still a high school student in Kiptere Secondary School. While there, he won the African Cross Country Championships in Cape Town, South Africa, at the age of 17, and won the silver medal in the same race a year later.

“On the track my achievements have been less. The best time to my credit is of 13:11.44 in the 5000m in Dusseldorf, Germany, in 2012. I want to major more in the 5000m race, and with the world championships coming in August, an opportunity couldn’t have come at a better time,” he says.

The first born in a family of five wants to serve as a role model to his juniors who have always seen him to be a future top star. “Nobody was really a runner in our family. My uncle, who used to train and encourage me to take running seriously, never even made it to the track.” he adds.

Korir also reminisces how he ran the IAAF World Challenge in Melbourne, Australia, in the 5000m in April.

“I won the race in a time of 13:31.94. This was yet another milestone, for I couldn’t have done it alone without God’s guidance,” he adds. “The year started on the bad note to me having been nursing ankle injury going to the national cross country trials. I must admit I feared for the worst, but I pulled through.”

This summer, Korir looks forward to the world championships with a lot of expectations, saying this can be an ideal time to finally win hardware on the track at the world stage.

“We have the national trials coming in July where the best in the country will be selected. I have faith that the Almighty Lord will guide me and keep me fit for the big task.”

“God has always been with me guiding and leading me even in strange paths and making me victorious. I trust and believe that He will be with me always.”

This story was published in Sports Spectrum Kenya.