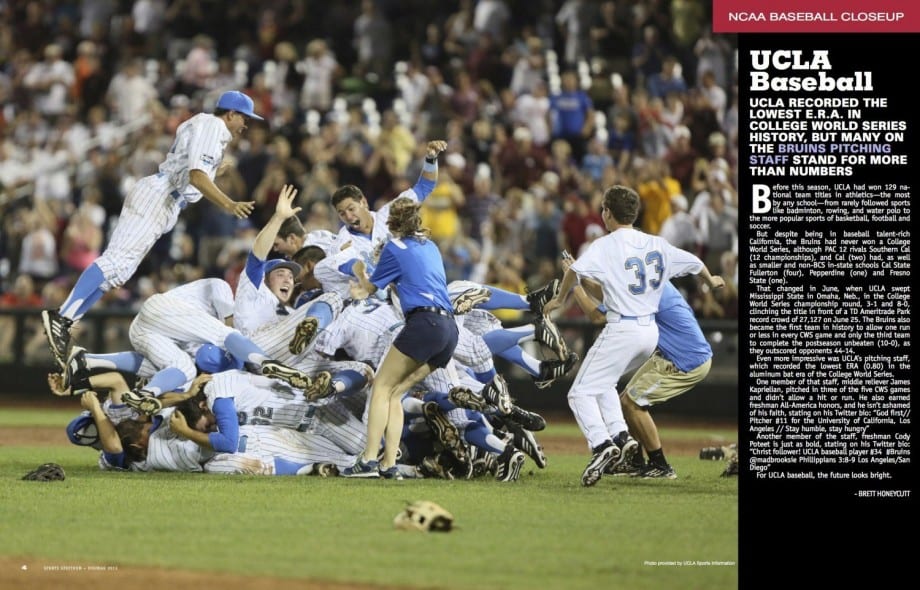 Before this season, UCLA had won 129 national team titles in athletics—the most by any school—from rarely followed sports like badminton, rowing, and water polo to the more popular sports of basketball, football and soccer.

But despite being in baseball talent-rich California, the Bruins had never won a College World Series, although PAC 12 rivals Southern Cal (12 championships), and Cal (two) had, as well as smaller and non-BCS in-state schools Cal State Fullerton (four), Pepperdine (one) and Fresno State (one).

That changed in June, when UCLA swept Mississippi State in Omaha, Neb., in the College World Series championship round, 3-1 and 8-0, clinching the title in front of a TD Ameritrade Park record crowd of 27,127 on June 25. The Bruins also became the first team in history to allow one run or less in every CWS game and only the third team to complete the postseason unbeaten (10-0), as they outscored opponents 44-14.

Even more impressive was UCLA’s pitching staff, which recorded the lowest ERA (0.80) in the aluminum bat era of the College World Series.

One member of that staff, middle reliever James Kaprielian, pitched in three of the five CWS games and didn’t allow a hit or run. He also earned freshman All-America honors, and he isn’t ashamed of his faith, stating on his Twitter bio: “God first//Pitcher #11 for the University of California, Los Angeles // Stay humble, stay hungry”