Airing it out: Memory Lane and Life's Lessons 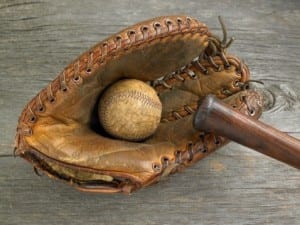 A trip down memory lane brought me some cash, great conversations, new memories to share and a lesson about what our earthly possessions can teach us about life here and the life to come.

It also reminded me of a simpler time when I was a kid, where baseball ruled and where popcorn, a slice of pizza and a coke were less than $3, and where summers were long and fun because of the simple game of baseball.

I have always been fascinated by the game. The smell of the leather gloves, pine tar and wooden bats, and cowhide or horsehide baseballs (whichever they used back then) are still fresh in my memory.

Even smelling newly cut grass now can elicit those memories of watching my brother play at the local park when he was a 7- or 8-years old (and I was too young to join the team), and later playing on the team with my brother, playing baseball on my grandfather’s farm, or just watching the local minor league team.

Mainly, though, baseball reminds me of newness (it’s spring time, school is close to an end and everyone is making plans for the summer and then another school year), and a freshness and long summer nights.

The memories of watching this simple game, though, are what I can’t escape. I saw plenty of baseball growing up, although then I didn’t appreciate it for the strategizing that can make a game seem like a chess match.

If I wasn’t playing baseball with a team or in my grandfather’s pasture (where a weather worn, burgundy-colored barn sat in between center and right field and my dad threw ball after ball while we hit and fielded), we were watching games in Charlotte, N.C., at one of America’s last wooden baseball stadiums, Crockett Park.

The team, the Charlotte Orioles and later the Charlotte O’s, were the Baltimore Orioles’ AA team (two steps from the majors). We saw Oriole greats Eddie Murray, Mike Boddiker and Cal Ripken, Jr., and future stars on visiting teams like Don Mattingly, Willie McGee, Jesse Barfield, Bo Jackson, Jose Canseco and Mark McGwire before they made it big and when they viewed signing autographs as a pleasure and not a chore.

What I remember fondly, besides the time spent with my mom (who went to games because she loved us and wanted to be with us), dad (who loved baseball and loved us more) and brother (who enjoyed the game more than me and kept score in his scorebook likely better than the official scorer) at games, though, was the memorabilia we collected.

We bought programs, took photos, got autographs, cracked bats, baseballs and game-worn hats from players, and acquired other memorabilia from the late 1970s until the late 1980s.

The collectibles were a cheap way to enjoy the game as a kid, and they still elicit the same kid-like memories today.

Recently I had a chance to sell some of the memorabilia (and also give some away). It made me think about what I used to treasure and what I treasure now.

It also made me realize that what made me happy then still makes me happy now, but in a different way. Back then, I lived for it. Today, I enjoy it but it’s not everything to me like it was then. I live for deeper things – to encourage people and help them see Christ in a way that will motivate them to see Him, whether they are Christians or not.

Because if things alone made us happy and fulfilled us, wouldn’t the Creator of all things bring us even more fulfillment?

This column is taken from Sports Spectrum’s Spring 2015 Digital issue. Log in HERE to view the issue. Not a subscriber? Subscribe HERE to receive eight issues of Sports Spectrum a year.