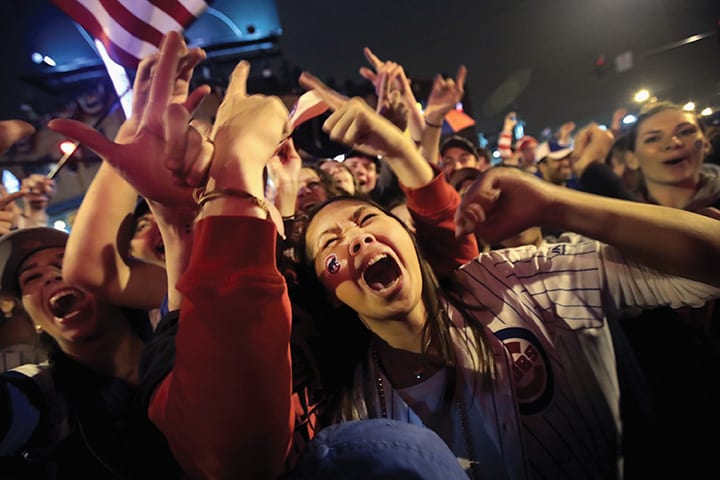 CHICAGO, IL – NOVEMBER 02: Chicago Cubs fans celebrate outside Wrigley Field as the Cubs play the Cleveland Indians during game seven of the 2016 World Series on November 2, 2016 in Chicago, Illinois. The Cubs defeated the Indians 8-7 to win their first World Series title since 1908. (Photo by Scott Olson/Getty Images)

The Chicago Cubs are World Series champs after more than 100 years of frustration.

It’s a joyous time in the Windy City, and in baseball, as well.

With the World Series victory came many sentimental stories and well wishes from media and fans—and people bringing up the name Steve Bartman.

He’s not a baseball player, a pro athlete or even a political figure.

He’s just a Chicago Cubs fan who suffered through all the losing and years of disap-pointments like other Cubs fans did until the Cubs beat the Cleveland Indians in dramatic fashion to win the 2016 World Series.

His name came up, though, because of an incident that happened 13 years ago. The simply called “Steve Bartman incident” epitomizes everything bad about sports and reminds us that we (and our society) have an unhealthy view of sports.

I’ll do a quick recap of why Bartman’s name worked its way into conversations this year for those too young to remember, who have short memories, aren’t baseball fans or who have been under a rock since October 14, 2003, when his name was made infamous by media and fans.

With one out in the top of the eighth in-ning in the National League Championship Series at Chicago’s famed Wrigley Field, the Chicago Cubs led the Florida Marlins 3-0 (and also held a 3-2 series lead), when Bartman, a Cubs fan (along with other Cubs fans, including children, a video showed), reached for a foul ball (as nearly 100 percent of fans do when a ball heads near the stands).

Chicago’s Moisés Alou attempted to catch it, but Bartman’s hand touched it, and Alou couldn’t make the grab.

You see, the stakes were high. Not only because the Cubs were five outs from making it to the World Series, but because it was the Chicago Cubs—perennial no shows in the World Series (hadn’t been since 1945) and without a title since 1908. 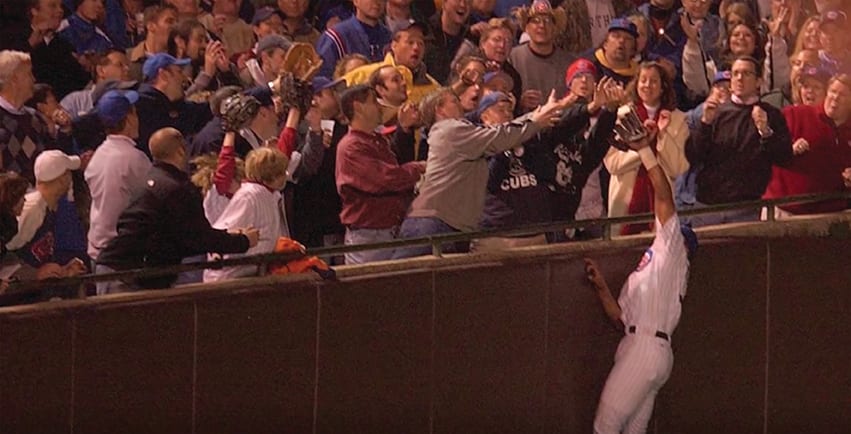 Although Alou was frustrated when it happened, and fans booed because of the perceived fan interference, Bartman could be forgiven because the Cubs were ahead 3-0. But then everything seemed to unravel for Chicago (and Bartman) and the Cubs lost 8-3.

Before the game was over, though, fans had yelled profanities and insults at Bartman, poured beer on him, and threw objects at him. Security, fortunately, intervened and escorted him and two friends from the stands, not as punishment for what the umpire deemed a foul ball and not interference, but for their safety.

The media and public figures didn’t do Bartman any favors, either. One of the TV commentators even said, “Here in Wrigley when the opposing team hits a home run, they throw the ball back on to the field. I’m surprised someone hasn’t thrown that fan onto the field.” Then-Illinois Governor Rod Blagojevich said Bartman should join a witness protection program (ironic, since Blagojevich would be convicted of corrup-tion several years later and began serving a 14-year prison sentence in 2012).

Replays of the incident were incessant, but proved little other than to inflame the situation.

The unfavorable, and constant, negative media treatment made it difficult for Bartman to carry on with a “normal” life (the Chicago Sun-Times reported that as many as six police cars were at Bartman’s home to protect him because of threats made to him and his family).

The Cubs lost the deciding Game 7 of the NLCS, and Florida went to the World Series and won, stealing (at least in Chicago Cubs’ fans minds) what was rightfully the Cubs, if not for the dastardly (sarcasm) Steve Bart-man.

That is why it’s okay to villainize a regular guy, at least in our society’s minds.

While reading this, if you tried to justify the treatment of Steve Bartman in any way, you have an unhealthy view of sports and need some perspective.

Sports were invented for a diversion from the everyday issues we face in life, and sports were meant to provide entertainment and physical activity for people.

They weren’t meant for grown men and women (and even grade school boys and girls) to grow so attached to “their” team that they miss work after a key loss or villainize fans who, innocently, tried to catch a foul ball.

So what then should be our focus if we can’t hold onto our team that tight?

If we love God, it will be difficult not to love others. And that last part, about loving your neighbor as yourself, would have helped bring a lot of peace to Steve Bartman’s life more than a decade ago, and would go a long way to helping bring peace all over the world.

Jesus knew what He was talking about.

Let’s listen and put His words into practice, and “Be doers of the word, and not hearers only, deceiving yourselves,” as James 1:22 says).

This column was published in Sports Spectrum’s Fall 2016 print magazine. Log in HERE to view the issue. Subscribe HERE to receive four issues of Sports Spectrum a year.