Nate Augspurger is a 31-year-old rugby player who competes for the U.S. national team as well as the San Diego Legion of Major League Rugby. He primarily plays standard, 15-a-side rugby, but has also competed for the U.S. in rugby sevens, and was a reserve for the U.S. team at the 2016 Rio Olympics. He picked up the game when he was 11 and went on to play club rugby at the University of Minnesota, where he earned  Collegiate All-American honors in sevens. Below, Nate shares about going up against the top rugby team in the world, how he saw God help him overcome injuries, and how he aims to see Christ increase in his life.

On Oct. 23, the USA Rugby team, the Eagles, got the chance to go against the New Zealand All Blacks — known to be the best rugby team in the world. We don’t get this opportunity often; the last time was six years ago. Having competed hard and played every game in the fall, I was going to get the chance to start — which I hadn’t done for the U.S. team since 2018 — against the All Blacks as the scrum-half. This was a moment I had been dreaming about since high school; in college I started consistently putting in extra workouts so that one day I might be able to test myself against the best, and take my rugby career to the highest level possible.

The Monday before the big game in Washington, D.C., I ruptured a tendon in one of my fingers during training. But I wasn’t about to let that stop me from playing later that week, so I taped it up myself without telling anyone and kept playing.

Tuesday was supposed to be a light day of training, but I strained my calf in practice and had to pull myself out. I knew if I kept pushing myself it would get worse, and the next day we were going to have a hard training session. Later that day, despite me not admitting to anyone what my calf felt like, my coaches told me I didn’t have to train at the next day’s practice. I could have the week off until the pregame rehearsal, the day before we compete.

With my finger and calf injured, I wasn’t about to admit to anyone what I was feeling — physically or emotionally. I didn’t want to miss the game for anything, but internally I was struggling. I didn’t want my coaches or teammates to think I was inadequate to compete, nor did I want them to lose confidence in the team, thinking I wasn’t at my best. I was doing all I could to stay in control of my own emotions and bring confidence to the team.

But my mind was so distracted I couldn’t even focus enough to read my Bible. The doubts, fears and thoughts about preparation were crowding my mind. I shot out a few texts to close friends and family to pray for me, but I wasn’t specific about what was happening. Only my wife knew the turmoil I felt in my mind and body. But the prayers and texts I received from my family and friends encouraged me. My pastor, Miles McPherson, who used to play in the NFL, also encouraged me to keep praying and believing.

At that point, the tide started turning for me. I told myself, “Nate, the only way it’s possible for you to play is if God shows up.” I knew I had to surrender everything I thought this game was going to be. All the selfish desires I had and how I thought I wanted it to go, I had to get rid of it all. 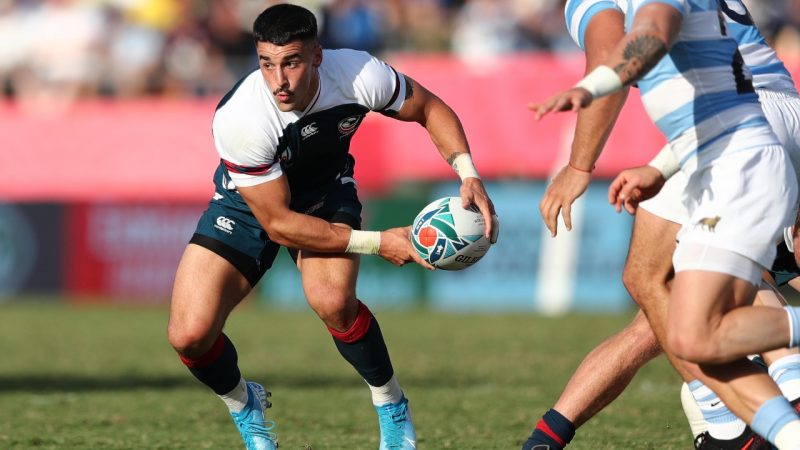 “Every day I step onto the pitch, God is with me. He loves to do the miraculous through us. When He does, it strengthens our faith, but in order to get us there, He has to allow some barriers to come up.” — Nate Augspurger

Struggling to focus on Scripture, I turned to worship. Every chance I had for the next few days, I listened to worship music. I started preparing my spirit, believing God could change things. By the time I got to the captain’s run on Friday, I knew I wasn’t 100 percent but I got through the day.

However, by the end of the pregame rehearsal, it felt as if the calf injury had just happened.

That same day, the jersey presentations took place. I anxiously waited to have my name called by our team to stand up and receive my jersey. When I was called, “Eagle 491, Nate Augspurger,” I got up to take my jersey — and immediately noticed I had no pain in my calf. I grabbed the jersey and sat back down — and knew God had His hand of healing on me. It was a moment God knew I needed. Just when I had no idea how I was going to get through, He said, “Just have faith in Me and let Me do it.”

Just when I thought I would be handicapped going against the best team in the world, the opposite happened. I was praying for God to let me play for at least five minutes, yet I got to play for all 80. Stepping out onto the field — full of faith for what God could and would do, instead of listening to the doubt and accusations in my head — I was amazed at what God did.

Though as a team we got absolutely smoked (104-14), I personally couldn’t be more proud of the game. Everyone said they saw me play at a whole new level. No one would have guessed I was injured earlier in the week. Being an American, and one of the smaller players, I’ve always been doubted in this game. But I made more than 10 tackles that day and scored a try right before halftime. It was the first try an American has ever scored against the All Blacks.

Scoring that try was the best moment of my career. Leading up to the game I had prayed that somehow God would be glorified through my performance. Everyone knows I am a follower of Christ; I’ve been very open about that. And when I scored that try, I immediately jumped up and then dropped to my knees and pointed to the sky. Not only did I get to show who I was as a player, I had a chance to give God all glory and appreciation for it. I was humbled to be able to have that stage of 40,000 people to allow others to see Jesus in me. It was incredible.

When you think there’s no way you can make it through, or that only one outcome is possible, think again. When you trust and believe that God is bigger, anything is possible. When you take a step of faith, He’ll be there. It may not result in the best game of your life, but it may. Make it your prayer to glorify God in what you do, no matter what the outcome may be. That day, I got to be one reason the American people were proud of their team. I pray that even non-believers saw a dude like me and said, “There’s something different about what happened out there with him.”

This may have been my version of going up against Goliath or entering into the lion’s den, but every day I step onto the pitch, God is with me. He loves to do the miraculous through us. When He does, it strengthens our faith, but in order to get us there, He has to allow some barriers to come up.

That’s what it means to serve His Kingdom. Surrender yourself and step out in faith to see how He wants to use you to bring Him glory. There’s no greater position to be in.

Created and led by pro athletes, The Increase is a ministry on mission to see all athletes, coaches, fans and people everywhere have an Increase experience with Christ as found in John 3:30. For more resources to help you discover that the best life is found as we die to self and live for Jesus, visit TheIncrease.com.

INCREASE STORY: From the Pitch to the Pulpit – Gavin Peacock