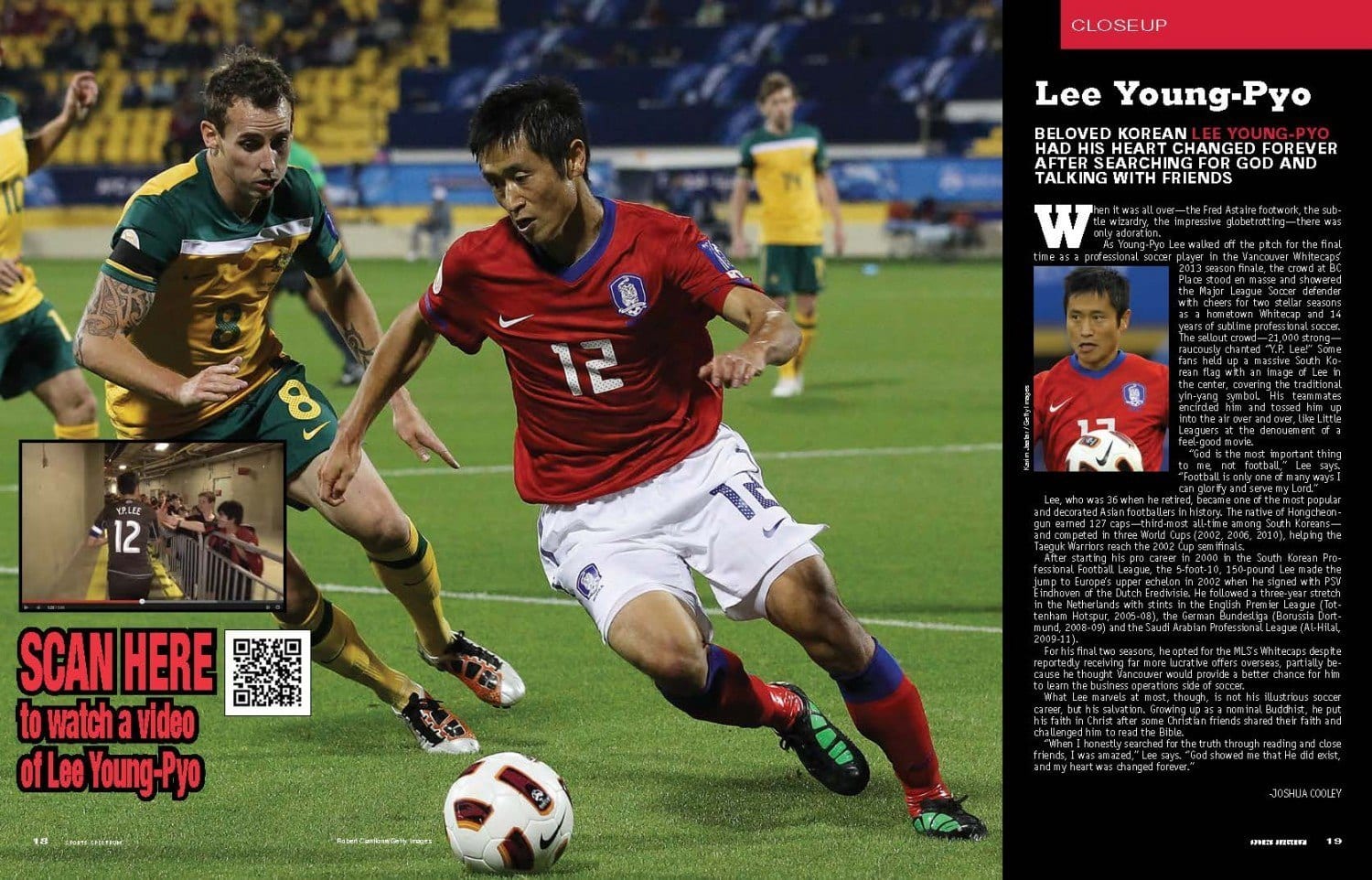 When it was all over—the Fred Astaire footwork, the subtle wizardry, the impressive globetrotting—there was only adoration.

As Young-Pyo Lee walked off the pitch for the final time as a professional soccer player in the Vancouver Whitecaps’ 2013 season finale, the crowd at BC Place stood en masse and showered the Major League Soccer defender with cheers for two stellar seasons as a hometown Whitecap and 14 years of sublime professional soccer. The sellout crowd—21,000 strong—raucously chanted “Y.P. Lee!” Some fans held up a massive South Korean flag with an image of Lee in the center, covering the traditional yin-yang symbol. His teammates encircled him and tossed him up into the air over and over, like Little Leaguers at the denouement of a feel-good movie.

“God is the most important thing to me, not football,” Lee says. “Football is only one of many ways I can glorify and serve my Lord.”

Lee, who was 36 when he retired, became one of the most popular and decorated Asian footballers in history. The native of Hongcheon-gun earned 127 caps—third-most all-time among South Koreans— and competed in three World Cups (2002, 2006, 2010), helping the Taeguk Warriors reach the 2002 Cup semifinals.

After starting his pro career in 2000 in the South Korean Professional Football League, the 5-foot-10, 150-pound Lee made the jump to Europe’s upper echelon in 2002 when he signed with PSV Eindhoven of the Dutch Eredivisie. He followed a three-year stretch in the Netherlands with stints in the English Premier League (Tottenham Hotspur, 2005-08), the German Bundesliga (Borussia Dortmund, 2008-09) and the Saudi Arabian Professional League (Al-Hilal, 2009-11).

For his final two seasons, he opted for the MLS’s Whitecaps despite reportedly receiving far more lucrative offers overseas, partially because he thought Vancouver would provide a better chance for him to learn the business operations side of soccer.

What Lee marvels at most, though, is not his illustrious soccer career, but his salvation. Growing up as a nominal Buddhist, he put his faith in Christ after some Christian friends shared their faith and challenged him to read the Bible.

“When I honestly searched for the truth through reading and close friends, I was amazed,” Lee says. “God showed me that He did exist, and my heart was changed forever.”