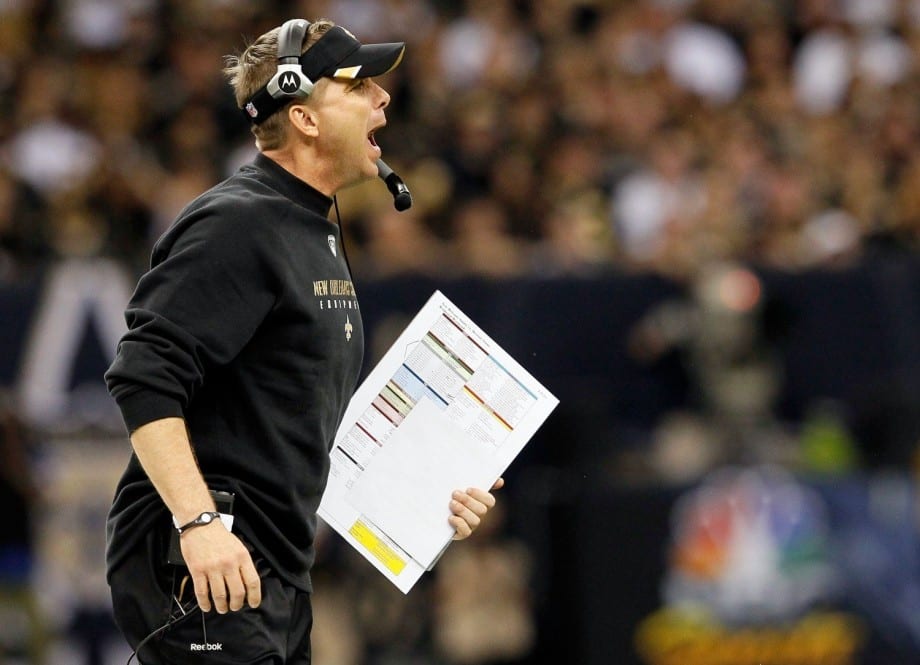 1. New Orleans Saints Bounty Scandal–This controversy has had more twists and turns than a weekly soap opera or pro wrestling show. The Saints coaching staff were accused of paying players to injure opponents, and in turn the team was fined $500,000, head coach Sean Payton was suspended for the season, New Orleans General Manager Mickey Loomis was suspended for eight games, assistant head coach Joe Vitt was suspended for six games and former defensive coordinator Greg Williams, who was charged with running the scheme, was suspended indefinitely. Saints’ players Jonathan Vilma, Anthony Hargrove, Will Smith, and Scott Fujita were all suspended for different lengths (Vilma for the season), but the NFLPA appealed the suspensions. After a lengthy appeals process that eventually led to former commissioner Paul Tagliabue making the final decision, all of the players suspensions were reversed because Tagliabue ruled that the players should have been fined, not suspended.

2. Replacement Refs–Only the NFL could survive two major controversies and see little to no effect on the perception of the league. The NFL went five weeks with replacement referees, as the regulars were in labor dispute. Each week there were moments of bad calls, missed rulings, and overall futility among the replacements, and it all came to a head with a blown call in a Monday Night Football game on national television. With the last play of the game, the replacement refs ruled that the Seahawks scored a touchdown, on a play that likely should have been ruled an interception, giving the Seahawks a win against the Packers. More public outcry ensued, and the NFL quickly reached an agreement with the regular refs in time for the weekly Thursday night game.

3. NHL Lockout–The NHL and its players have not been able to reach a labor agreement, and it’s very possible that an entire NHL season will be cancelled for the second time in the last decade. If there are no games and no money to be shared among players and owners, what is there left to negotiate?

5. Infield Fly Rule–In the first ever National League wild card playoff game, an umpire’s ruling led to a 19-minute delay while fans at Turner Field littered the field with beer cans, water bottles, and foam tomahawks. Down 6-3 in the eighth inning and with one out, Braves shortstop Andrelton Simmons hit a blooper that landed in the middle of the outfield in between Cardinals left fielder Matt Holliday and shortstop Pete Kozma. This allowed the bases to be loaded with the go-ahead run, slugger Brian McCann, at the plate. At least that’s what Braves fans thought. Umpire Sam Holbrook decided that the shortstop had been “camped” under the pop up and applied the infield fly rule, which meant Simmons was out, despite the fact that the ball was halfway into the outfield. Most baseball analysts said they had never seen an infield fly rule called that deep into the outfield. The Braves lost the game, and because of the nature of a one-game playoff, many fans will blame the umpire for ruining Chipper Jones’ last postseason.

6. Oscar Pistorius–South African runner Oscar Pistorius, one of the best runners in the Paralympics, won his fight to compete against able-bodied runners. Back in 2008, the International Association of Athletics Federations ruled that Pistorius’ “Cheetah” prosthetic blades were considered a technical aid, based on a study by German professor Gert-Peter Brueggemann that the IAAF and Pistorius had endorsed, and therefore was in violation of the rules and gave Pistorious an advantage over able-bodied runners. This meant Pistorius could not compete in the 2008 Summer Olympics. But in May of 2008, the Court of Arbitration for Sport ruled that not enough scientific information was known to prove that the “Cheetah” blades gave Pistorius a competitive advantage and, therefore, cleared him to compete against able-bodied athletes. The IAAF agreed that same day and accepted the decision. Even though Pistorius didn’t make the 2008 South African team, he did make the 2012 team for the London Olympics and became the first double-amputee to complete in the Olympics.

7. Tanking in Badminton–Yes, there was tanking in badminton. Eight Chinese badminton players were tossed out of the Olympics after it was discovered that the competitors were purposely losing in the qualifying rounds in order to get a better draw once they started playing for real.

8. Flop Fines–Flopping has long been a perceived problem in the NBA. Those who do it call it an art form (see Shane Battier, Reggie Miller, Vlade Divac, etc.). Those who don’t like it, say it kills the integrity of the game. NBA Commissioner David Stern agreed with the latter, and instead of holding referees responsible for missing the call, he decided to start making flopping a fineable offense. Each offense gains a higher fine, and if you flop too much, you could be suspended. (It would be kind of nice if we could fine our politicians when they do this.)

9. French low blow–Another Olympic controversy occurred in a basketball game against France and Spain. In the basketball quarterfinals, after the game had been decided, French forward Nicolas Batum (also a member of the Portland Trailblazers) punched Spanish guard Juan Carlos Navarro below the midsection. Batum was not ejected from the game and showed no remorse after the game, saying, “I wanted to give him a good reason to flop.” When asked if the low blow showed the Olympic spirit, Batum accused Spain of throwing a game in pool play in order to avoid the United States until the gold medal game by saying, “Do you think if you lost a game on purpose, that’s the Olympic spirit?” Batum eventually apologized through Twitter, though never face-to-face to the man he punched.

10. Tim Tebow/Mark Sanchez–This really isn’t a true controversy, but the amount of media coverage devoted to the quarterback situation with the New York Jets would have made you think it was. There was daily speculation all season on whether or not Tim Tebow would replace Mark Sanchez as starting quarterback of the New York Jets, and head coach Rex Ryan had to address it at nearly every press conference. Sanchez played poorly all season and the Jets’ offense was putrid, but once New York was eliminated from the playoffs, Sanchez was replaced with…Greg McElroy not Tebow. Making everyone wonder why the Jets ever traded for Tebow in the first place.

This was published in the December 2012 DigiMay. Aaron May is a staff writer at Sports Spectrum magazine.