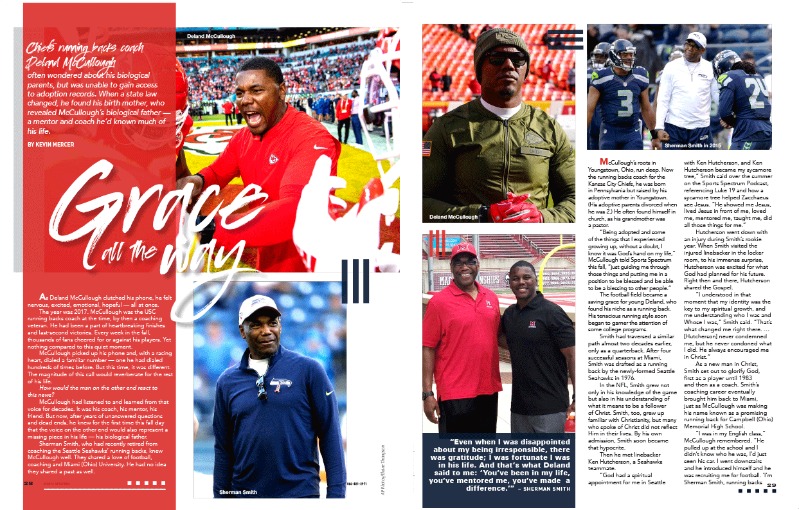 Chiefs running backs coach Deland McCullough often wondered about his biological parents, but was unable to gain access to adoption records. When a state law changed, he found his birth mother, who revealed McCullough’s biological father — a mentor and coach he’d known much of his life.

As Deland McCullough clutched his phone, he felt nervous, excited, emotional, hopeful — all at once.

The year was 2017. McCullough was the USC running backs coach at the time, by then a coaching veteran. He had been a part of heartbreaking finishes and last-second victories. Every week in the fall, thousands of fans cheered for or against his players. Yet nothing compared to this quiet moment.

McCullough picked up his phone and, with a racing heart, dialed a familiar number — one he had dialed hundreds of times before. But this time, it was different. The magnitude of this call would reverberate for the rest of his life.

How would the man on the other end react to this news?

McCullough had listened to and learned from that voice for decades. It was his coach, his mentor, his friend. But now, after years of unanswered questions and dead ends, he knew for the first time this fall day that the voice on the other end would also represent a missing piece in his life — his biological father.

Sherman Smith, who had recently retired from coaching the Seattle Seahawks’ running backs, knew McCullough well. They shared a love of football, coaching and Miami (Ohio) University. He had no idea they shared a past as well.

McCullough’s roots in Youngstown, Ohio, run deep. Now the running backs coach for the Kansas City Chiefs, he was born in Pennsylvania but raised by his adoptive mother in Youngstown. (His adoptive parents divorced when he was 2.) He often found himself in church, as his grandmother was a pastor.

“Being adopted and some of the things that I experienced growing up, without a doubt, I know it was God’s hand on my life,” McCullough told Sports Spectrum this fall, “just guiding me through those things and putting me in a position to be blessed and be able to be a blessing to other people.”

The football field became a saving grace for young Deland, who found his niche as a running back. His tenacious running style soon began to garner the attention of some college programs.

Smith had traversed a similar path almost two decades earlier, only as a quarterback. After four successful seasons at Miami, Smith was drafted as a running back by the newly-formed Seattle Seahawks in 1976.

In the NFL, Smith grew not only in his knowledge of the game but also in his understanding of what it means to be a follower of Christ. Smith, too, grew up familiar with Christianity, but many who spoke of Christ did not reflect Him in their lives. By his own admission, Smith soon became that hypocrite.

Then he met linebacker Ken Hutcherson, a Seahawks teammate.

“God had a spiritual appointment for me in Seattle with Ken Hutcherson, and Ken Hutcherson became my sycamore tree,” Smith said over the summer on the Sports Spectrum Podcast, referencing Luke 19 and how a sycamore tree helped Zacchaeus see Jesus. “He showed me Jesus, lived Jesus in front of me, loved me, mentored me, taught me, did all those things for me.” 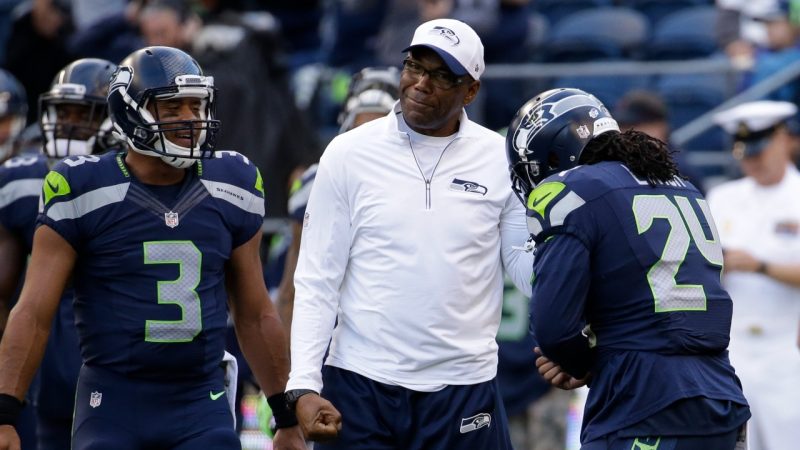 Hutcherson went down with an injury during Smith’s rookie year. When Smith visited the injured linebacker in the locker room, to his immense surprise, Hutcherson was excited for what God had planned for his future. Right then and there, Hutcherson shared the Gospel.

“I understood in that moment that my identity was the key to my spiritual growth, and me understanding who I was and Whose I was,” Smith said. “That’s what changed me right there. … [Hutcherson] never condemned me, but he never condoned what I did. He always encouraged me in Christ.”

As a new man in Christ, Smith set out to glorify God, first as a player until 1983 and then as a coach. Smith’s coaching career eventually brought him back to Miami, just as McCullough was making his name known as a promising running back for Campbell (Ohio) Memorial High School.

“I was in my English class,” McCullough remembered. “He pulled up at the school and I didn’t know who he was, I’d just seen his car. I went downstairs and he introduced himself and he was recruiting me for football. ‘I’m Sherman Smith, running backs coach at Miami University.’”

The chemistry was immediate. He convinced McCullough to attend Miami, and although Smith left after McCullough’s first season, McCullough was a starter for four years. He set a school and conference all-time rushing record, and signed with the Cincinnati Bengals as an undrafted free agent in 1996. A right knee injury soon derailed his dream of playing in a regular-season NFL game. Yet, like his mentor, coaching NFL running backs was his destiny.

After getting into high school coaching in 2001 (then becoming athletic director and principal at the same school), McCullough found himself at Indiana in 2011. As he sought to advance in the coaching ranks, he was offered an internship in 2014 with the Seattle Seahawks. Smith, then with Seattle, was the one who helped him secure it.

“We always had a good relationship,” Smith said. “I was Coach Smith and that was my guy, Deland. … The fact that he was a running backs coach made it fun.”

The two connected, as a mentor connects with a mentee, on football coaching philosophies, on parenthood and on faith. Little did they know that God had planned much more.

After McCullough became a husband and a father of four, his intrigue about his own beginnings resurfaced. He had been wondering throughout his life but seemingly came to a dead end when he learned of Pennsylvania’s closed adoption records. However, in the spring of 2017, the state changed its laws.

“When I decided to look, God opened up some avenues,” McCullough said. “Obviously, I was ready for that and it seemed like it kind of fit for everybody.”

McCullough was able to see his given name at birth: Jon Kenneth Briggs. He also saw his mother’s: Carol Denise Briggs.

McCullough searched and found his mother on Facebook, and eventually mother and son spoke on the phone. Conversation flowed smoothly, and McCullough was surprised to learn that Briggs lived in Youngstown, only a short drive from where he grew up. Yet it would pale in comparison to the shock that came next, when the conversation shifted to the other parent.

Your dad is a man named Sherman Smith.

“I was very excited. I was stunned,” McCullough said about the moment that left him speechless. “It was pretty surreal. I was blown back.”

Briggs knew Smith in high school, but when he went away to college, she never told him a son existed. Smith went on to marry and become a father of two, with three grandchildren. Knowing this, McCullough quickly realized the news he would soon deliver would be shocking and life-altering for Smith as well. 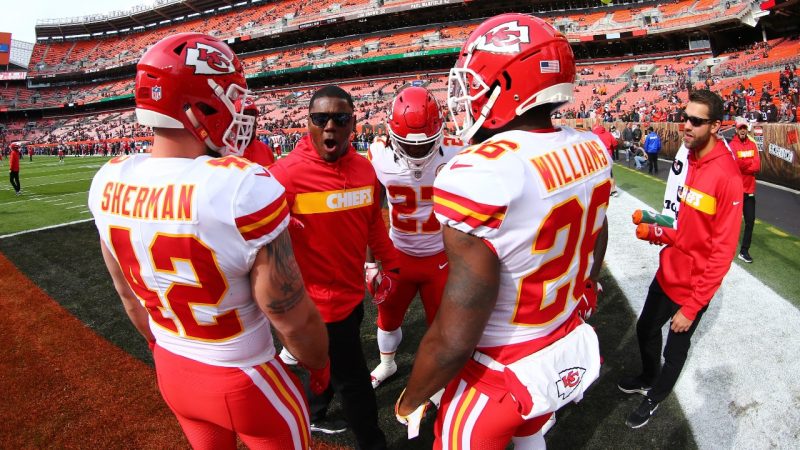 When Smith answered the phone that autumn day in 2017 and McCullough began explaining the yearslong process of finding his biological parents, Smith was happy for his coaching protégé. He was thrilled to hear that McCullough had found his mother and even talked to her.

“And then he said her name,” Smith remembered. “And when he said her name, my heart dropped because I knew her. … I just felt terrible. I felt bad. I felt bad because I felt irresponsible. At that time when Deland called me, I was 63 years old, and you see things differently at 63 than you do when you’re 16 or 17 years old. I just felt so irresponsible.”

McCullough, now 47, would have none of it. He was eager to forgive, eager to give thanks.

“Even when I was disappointed about my being irresponsible, there was gratitude; I was fortunate I was in his life,” Smith said. “And that’s what Deland said to me: ‘You’ve been in my life, you’ve mentored me, you’ve made a difference.’”

Smith later added, “God gave grace through all of it, starting with my wife. She was just awesome — she didn’t have to regroup. When I told her that night about Deland telling me that I was his father, my wife said, ‘Well, if it’s true, then our family just got bigger…